The CEO of Levi Wants You to Freeze Your Jeans, but Does Science?

Denim popsicles for all! 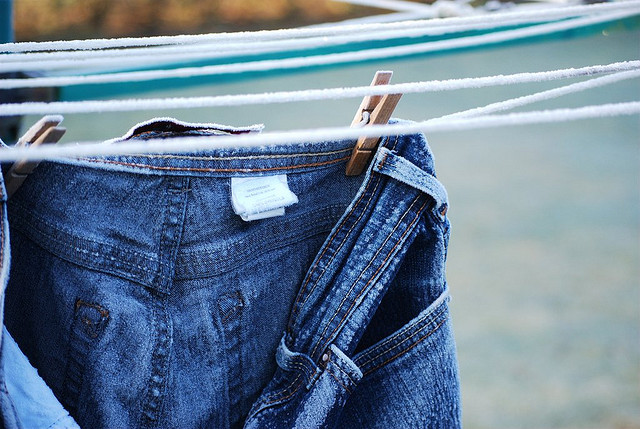 Tuesday marked the 141st birthday of Levi, and in celebration of the company’s old age, CEO Chip Bergh announced that, as part of their sustainability initiative, everyone should stop washing jeans so damn much and pop ’em in the freezer instead. However, people who actually know a thing or two about microbes might not be ready to take his advice.

Hearing about Bergh’s bizarre cleaning methods was a big personal win for me, because A: laundry schmaundry, and B: I have been freezing jeans and receiving flack for it for years. If the presumably very wealthy CEO of an 141 year old company can keep putting his clothes in the freezer after college, that’s carte blanche for me to continue doing it too, right? Sadly, scientists are not entirely on board with using the big chill to kill germs.

Way back in 2011, University of Delaware frozen microbes expert Stephen Cray e-mailed The Smithsonian to warn the denim-wearing public that:

One might think that if the temperature drops well below the human body temperature they will not survive, but actually many will. Many are preadapted to survive low temperatures. I would suggest that you either raise the temperature to 121 degrees Celsius for at least 10 minutes, or just wash them! The latter surely is the best alternative to save energy.

Cray promised that all it takes for your bell bottoms to become a bacteria-ridden mess is one resilient germ to survive the clean. He was also stationed in Antarctica at the time, so he’d probably learned a thing or two about freezing things. Sadly, Cray wasn’t the only denim debunker who contacted The Smithsonian to warn people to stick with conventional cleaning methods. Julie Segre of the National Human Genome Research Institute cautioned that washing is the best option, because it removes a build up of more than just germs:

Sure, Segre and Cray probably know far more about the resiliency of microbes than me or the CEO of a clothing corporation. But freezing your jeans is just so damn easy, and it feels amazing to pop them on straight outta the ice locker (I don’t know if boys can find it quite as refreshing). More importantly, though, washing jeans just seems wasteful. Mashable says that 2,500 gallons of water can be used to wash a single pair during their lifetime.

At least Levi’s Bergh claims to follow his own advice: in an interview for Fortune’s Brainstorm Green, he claimed that the jeans he was wearing had “yet to see a washing machine” in the past year, and unlike me, that’s not because he can’t afford one.

Levi’s is also premiering a “Waterless” jean line designed specifically to not be washed. If the line is made of raw denim, then those jeans might be an exception to the “wash to truly get rid of germs” warning from Segre and Cray. In 2011, Gizmodo reported that experiments at the University of Alberta showed unwashed raw denim had the same amount of microbes on it whether it had gone unwashed for two weeks or fifteen months.

Regardless of the minor scientific controversy surrounding his cleaning suggestion, Bergh is determined his company appear ecologically savvy. He told Fortune “We are the ultimate in sustainable apparel[…]If you buy [our jeans] they will last a lot longer than most people’s waistlines will.” That’s probably not necessarily true, considering if you’re freezin’ your jeans all day there’s less room in your house for actual frozen foods like ice cream, but still.

If you want to experiment with freezing jeans for yourself, here’s a “how to” video, although this might be one weird household trick every proponent performs a little differently. Bergh and I both do and it, and we’re not dead (yet)… and if we are killed by our dirty little habit, at least we’ll have lots of unfaded denim to leave our loved ones.

(via Mashable, Gizmodo and The Smithsonian, image via Simon Huggins)