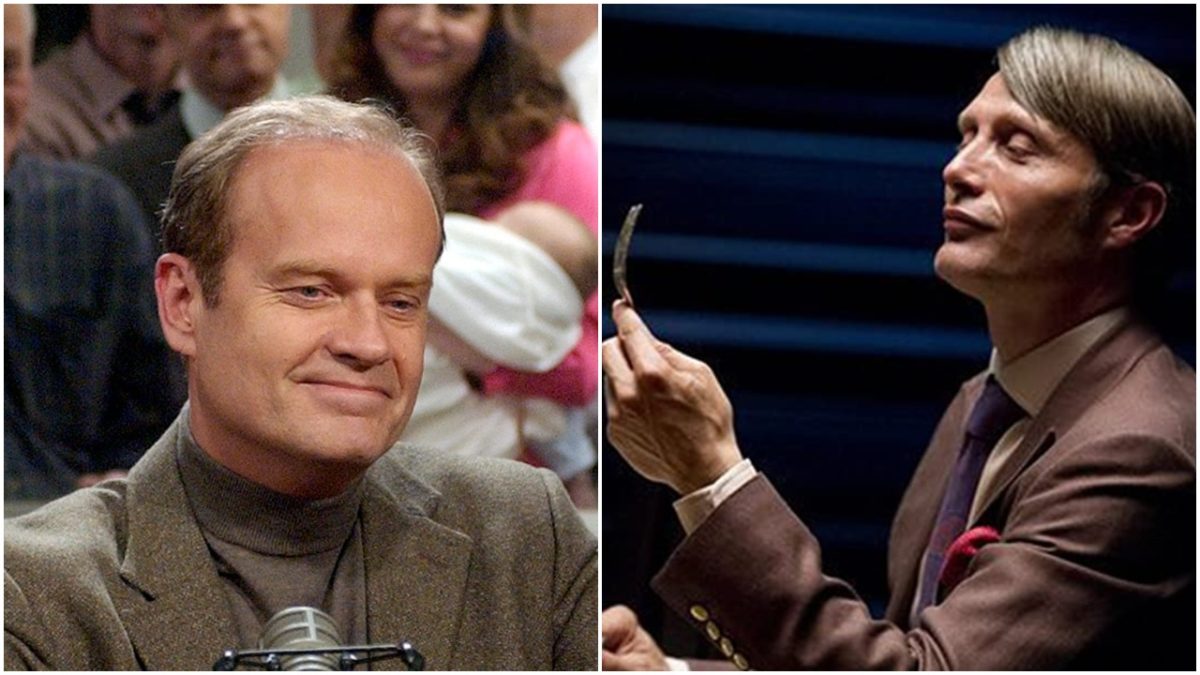 Quick! Name the NBC series that features a conceited, sophisticated psychiatrist surrounded by morons. The one where the lead guy is really into opera and high culture and that has serious homoerotic undertones. Did you name Hannibal or did you call out Frasier? Or both? And that’s exactly my point because today I realized that Frasier Crane is just a version of Hannibal Lecter that doesn’t eat people.

Well, as far as we know Frasier doesn’t eat people. Maybe he doesn’t know what to do with that tossed salad and scrambled eggs because the secret ingredient is rude humans.

Just think about this, friends. How different are these two guys, really? They both love a good suit, a nice bottle of wine, a night at the symphony and of course, a perfectly planned dinner party. But it goes even further, they both have histories of weird relationships with their siblings, though granted, Frasier never was tricked into eating Niles. Though I’m sure he considered it.

Now, which came first though, the cannibal or the eggs? Well, Hannibal Lecter first appeared as a character in Red Dragon, which was published in 1981, whereas Cheers didn’t even start airing until 1982 and Frasier didn’t come on the show as a character until 1985. Which of course leads me to conclude that Frasier was based on Hannibal Lecter.

Funnily enough, the Hannibal Lecter character, like Frasier, started as a supporting player in a larger work and grew into his own beast in the late eighties and nineties thanks to a compelling portrayal by a talented actor with Shakespearean credits and cachet, a great voice and a receding hairline. Yes, Mads Mikkelsen is a far cry from Kelsey Grammer but Grammer and Anthony Hopkins aren’t so far apart. Wake up, people! They’re THE SAME!

Maybe it’s even worse. Maybe all psychiatrists in the ’80s were snobbish and vaguely aristocratic, with withering wits and a disdain for the mundane and gauche. Maybe all had the ability to tell a Bordeaux from a merlot, and an affinity for fine silk was all it took to get into medical school with a focus on psychiatry back in the day.

Of course, there are differences. These shows came from different eras. There was always a winking queer subtext to Frasier and Niles and the show often tried to offset their fussiness and femininity with various love interests and subplots. Hannibal also started out woefully straight but morphed into a murderous queer love story by the end.

And then yes, there is all that murder and cannibalism. But I’m not sure Frasier never killed anyone, honestly. He left Boston pretty abruptly before moving to Seattle. And what better way to pick victims and hide the trail than only taking patients via a radio call-in show? And Frasier lives in the Pacific Northwest so he’s obviously environmentally aware, thus, cannibalism. Eating the people you kill isn’t brutal, it’s green.  And have you ever seen them in the same place? I rest my case.

Now that you’ve been enlightened, I hope this changes how you look at the good and not-so-good doctors when next you catch up with them. (Hannibal is available on Amazon Prime, and Frasier is available on Prime, Hulu and more). And if you meet a psychiatrist that likes wine, art, and classical music? Run.