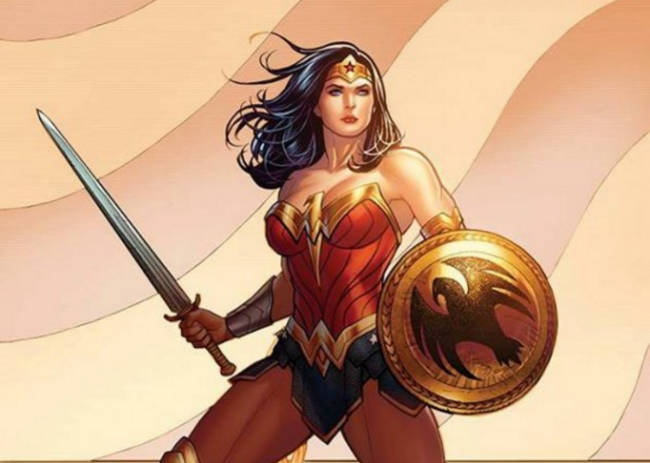 Frank Cho, who you may know from his “sexy cover art” antics on Spider-Gwen (and more), has walked off of working on a series of Wonder Woman variant covers. Earlier this year, he was commissioned to create a series of 24 variant covers for the new Wonder Woman comic written by Greg Rucka. Cho only made it about six covers in before walking off, citing “censorship” and “political agendas.” In a statement to Bleeding Cool, Cho wrote:

All the problem lies with Greg Rucka.

EVERYONE loves my Wonder Woman covers and wants me to stay. Greg Rucka is the ONLY one who has any problem with covers. Greg Rucka has been trying to alter and censor my artwork since day one.

Greg Rucka thought my Wonder Woman #3 cover was vulgar and showed too much skin, and has been spearheading censorship, which is baffling since my Wonder Woman image is on model and shows the same amount of skin as the interior art, and it’s a VARIANT COVER and he should have no editorial control over it. (But he does. WTF?!!!)

I tried to play nice, not rock the boat and do my best on the covers, but Greg’s weird political agenda against me and my art has made that job impossible. Wonder Woman was the ONLY reason I came over to DC Comics.

To DC’s credit, especially [Art Director] Mark Chiarello, they have been very accommodating. But they are caught between a rock and a hard place.

I just wanted to be left alone and do my Wonder Woman variant covers in peace. But Greg Rucka is in a hostile power trip and causing unnecessary friction over variant covers.

Cho’s no stranger to cover art controversy—as stated earlier, he’s been at the center of more than a few firestorms regarding the overtly sexualized covers that he draws of female comic book heroes. In one particularly egregious example, his “sexy cover” of Spider-Gwen is especially skeezy because, well, she’s a teenager, but there she is, sexualized anyway.

That aside, Cho’s drawn more than a few other cheesecake pieces, some of which feel like very pointed jabs at folks who “overreact” to such pieces. The Wonder Woman art in question hasn’t been released, and after this controversy, it doesn’t seem likely that it will be.

We’ve reached out to Cho and Rucka for comments, and will update as necessary.

[UPDATE]: Cho has responded to our request for comment, and we’ve included his statement below.

Since you’re asking me a straight question, I’m going to answer honestly as possible from my point of view.
Wonder Woman was my dream job at DC Comics. I love and respect the character very much. When I was invited by DC to draw the 24 variant covers for Wonder Woman, I was ecstatic. I was told that I had complete freedom on the variant covers and the only person in charge of me was the senior art director, Mark Chiarello, who I greatly respect. Win-win for everyone.
Now the variant covers are handled by entirely separate editorial office than the rest of the books. I was given assurance that I would not have to deal with the Wonder Woman book writer or editor at all, and were told I would only be dealing with Mark Chiarello. So I came onboard and started working right away.
Everything went smoothly at first. I turned in my first batch of cover sketches and Chiarello approved them, and I started finishing and inking them ASAP since these were biweekly covers and we had limited time. Then Chiarello started getting art notes from Greg Rucka ordering him to tell me to alter and change things on the covers. (Remove arm band, make the skirt longer and wider to cover her up, showing too much skin, add the lasso here, etc.) Well, Chiarello and I were baffled and annoyed by Greg Rucka’s art change orders. More so, since the interior pages were showing the same amount or more skin than my variant covers. (For example: Issue #2, panel One, etc.) I requested that Greg Rucka back off and let me do my variant covers in peace. After all, these were minor and subjective changes. And let’s face it, being told by a non-artistic freelancer what I can and cannot draw didn’t sit too well with me.
Then things got ugly. Apparently unbeknownst to Chiarello and me, DC, for whatever reason, gave Greg Rucka complete and total editorial control on Wonder Woman including variant covers by contract. My promises of creative freedom were verbal. I think this is a case of complete miscommunication and things falling through the crack during the post-DC headquarter move to LA.  Had I’ve known Greg Rucka had complete editorial control over the variant covers, I would have never came onboard Wonder Woman.
Since we were on the same team with the same goal – making  great Wonder Woman comics, Mark Chiarello and I tried to reason with Greg Rucka to back off and let me do the variant covers in peace. But Rucka refused and tried to hammer me in line. Things escalated and got toxic very fast. The act of a freelance writer art directing me, overruling my senior art director, altering my artwork without consent was too much. I realized after Rucka’s problems with my Wonder Woman #3 variant cover, my excitement and desire for the project have completely disappeared and I decided to bow out quietly after I finish my Wonder Woman #4 variant cover. (This was around end of May.) But DC wanted me to stay and finish out #5 and #6 covers to give them some time to find my replacement.
So I stuck it out and tried to deal with the flagrant disrespect for six issues, and quietly stepped off until Bleeding Cool gave me little choice but to respond. They caught wind that there was some discord in the Wonder Woman office over my covers and was about to cast negative light on the wrong people. So I went public yesterday and set the story straight, correctly naming Greg Rucka as the source of the problem before the wrong information was published.

We’ll continue to update as necessary.