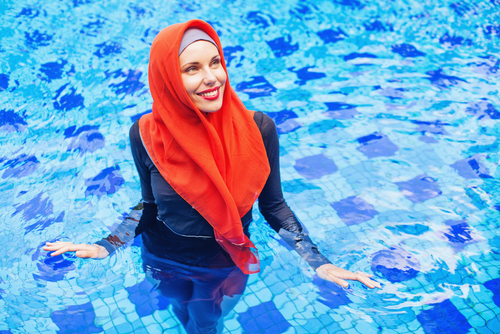 Yesterday, in our Feminism Around the World column, we highlighted the fact that some French towns had instituted bans on burkinis on public beaches. This morning, after global attention (and public social media shaming), the French government has decided to act accordingly and overturn those bans.

As reported by the Associated Press, the Council of State (France’s top administrative court) overturned the burkini ban in the town of Villeneuve-Loubet on the Riviera. The decision to overturn only applies to this one town for right now, but it’s expected to set a precedent for all the other towns in France that have implemented similar bans.

This news is a relief to many people, both in France and around the world, who see the bans as discriminatory on the basis of ethnicity, religion, and gender and don’t see issues of “secularism” or “national security” as having priority over equality. They took to social media under the #BurkiniBan hashtag to speak out against the hypocritical bans, because as British political writer, Laurie Penny put it in a piece she wrote for the New Statesman this morning, “There are many words for this sort of bullying, but Liberty does not come into it, and nor does Equality. Fraternity, of course, is doing just fine,” playing on the French national motto: Liberté, égalité, fraternité.

Of course, the news is also meeting a lot of resistance. Already Ange-Pierre Vivoni, the mayor of Sisco (a town in Northern Corsica), has refused to lift the ban even if the French government overturns it, telling French outlet BFM-TV, “Here the tension is very, very, very strong and I won’t withdraw it.” Meanwhile, the leader of the right-wing National Front party Marine Le Pen, has urged French lawmakers to vote “as quickly as possible” to extend the 2004 law banning Muslim headscarves and other ostentatious religious symbols in classrooms to include all public spaces, saying “The burkini would obviously be part of it.” This fine woman is running for President in France in their 2017 election.

Here’s hoping the French government stands firm against this and other discriminatory laws (including a re-think on that 2004 law), and remembers that defending secularism does not mean fighting against expression of the non-secular. Public law and private expression should be allowed to coexist.

(via AP, image via Shutterstock)