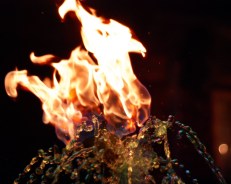 In the quest to lower energy costs, natural gas has done quite well for itself thanks in no small part to a controversial extraction method called “fracking.” Bearing no relation to the BSG phrase, it refers to the practice of fracturing layers of rock using high-pressure water. Fracking has come under fire in the past because the fluid used in the extraction can contaminate the surrounding areas with dangerous dissolved metals and radioactive material. But a new study reveals that fracking may also be contaminating ground water with explosive methane gas.

Hoping to determine the larger impact of fracking, Duke University sampled 68 wells in rural New York and Pennsylvania. These communities were used because of their reliance on ground water, as opposed to more well monitored municipal water. The study found that methane gas was, indeed, infiltrating the water supply. At close proximity to the drill sites, about 1km, the readings were 17 times higher than those at greater distances. More distressing, the study found some samples with methane concentrations from 19.2 to 64 mg per litre. At these concentrations, the gas could potentially be an explosive risk.

After looking at the water’s isotope ratios and finding both ethane and propane in the water, the team concluded that it had to have come from the deep gas wells which employ fracking. Though it is small consolation, the study also concluded that there was no heavy metal or radioactive contamination in the water due to the drilling. This information will no doubt slow the practice of fracking somewhat, but it will likely take a while (and perhaps many lawsuits) before some residents can be confident about the water they drink.

(via Ars Technica, image via Will Montague)