Thanks I Hate It: Fox Tries to Trademark “OK Boomer” Meme for New Reality Show

Once again, they went and killed the thing. 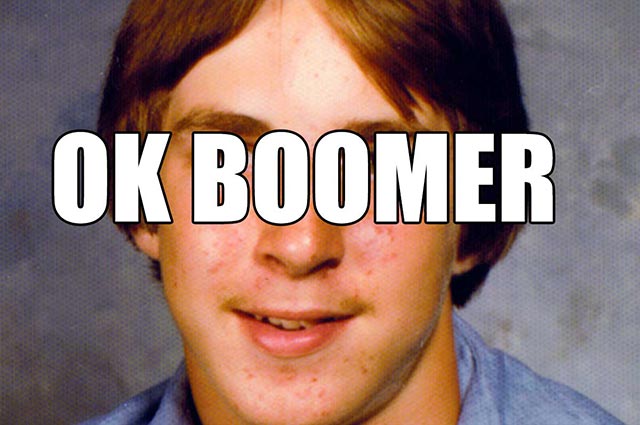 Arguably the greatest creation of modern man, the internet has revolutionized the way we connect and communicate with our friends, family, community, and total strangers. Unfortunately part of the way that has unfolded is the creation of “meme culture.” These online-only (for the most part) cultural touchstones can take the internet by storm and become a shorthand for whichever discourse they are touching upon, but ultimately, due to over-saturation, have the brief life cycle of a fruit fly.

FOX has filed a trademark application for “OK BOOMER.”

The media giant filed the application on November 11th.

According to the filing, FOX intends to launch a reality, comedy and/or game show called OK BOOMER.

And nothing kills a meme faster (aside from it getting co-opted by white supremacists, RIP Pepe), than having it breach the consciousness of baby boomers and corporations—which, speaking of boomers, has now happened with viral phrase “ok boomer.” According to Josh Gerben, attorney and partner of Gerben Law Firm, Fox Media has filed for a trademark of the phrase hoping to use it for a reality, comedy, and/or game show. And Fox isn’t the only one rushing after the trademark. Since Fox’s filing, there have been at least three other businesses filing for a multitude of reasons (including stickers, clothing, and a stage play.)

But, according to Gerben:

“In all likelihood, the USPTO will deny all of these applications because OK BOOMER has become a ‘widely used message.’ A trademark registration will not issue in a phrase that is commonly used to convey a social or political message. This is because such a ‘viral’ phrase is incapable of identifying the source of a product or service — which is what trademarks must do to be capable of registration.”

The Fox entity that filed for the trademark is Fox Media, LLC, the entity still owned and operated by Rupert Murdoch after selling much of his entertainment business to Disney. Fox Media still operates networks like Fox News, Fox Business, and local Fox channels, which makes this trademark/reality show attempt even more hilarious/depressing. The majority of their audience are the very boomers that are now crying that the word boomer is an ageist slur.

Would this (most likely never to be seen), show be an attempt at reclaiming the word? Are they hoping it will bridge some of the widening generational gaps? Hahaha just kidding, they are just hoping it will make them lots and lots of cash. Honestly, even speculating on what sort of terrible premise the show might have leaves me, an old millennial, feeling so very tired.

But the joke’s on them! As mentioned above, nothing kills a meme faster than brand saturation and old folk adopting it, and this meme is already at death’s door. Luckily, I hear it reserved a headstone next to Milkshake Duck and Ermahgerd Berks.