Fox Shoots Hunter — After Being Shot by Hunter 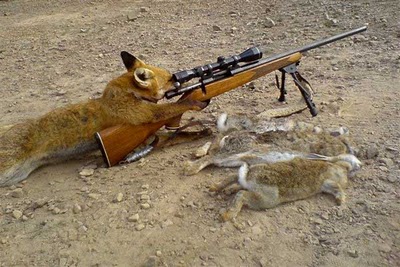 In an act of cartoonish, anthropomorphic revenge, a fox, after being shot by a hunter, somehow managed to slip its paw into the trigger and pull it, shooting the hunter in the leg.

From The Daily Mail:

The bizarre incident happened as the unnamed 40-year-old hunter tried to kill the fox with the butt of his gun after shooting it from a distance. The fox made its escape while friends took the injured man to hospital.

Of course, it’s the Daily Mail, so who knows if this man bites dog story has any, uh… meat to it.

There is also no word whether the fox is being pitched a Fox action series. The hunter asked not to be named due to embarrassment, but the fox was quoted as, “Yeah, that’s what you get.”