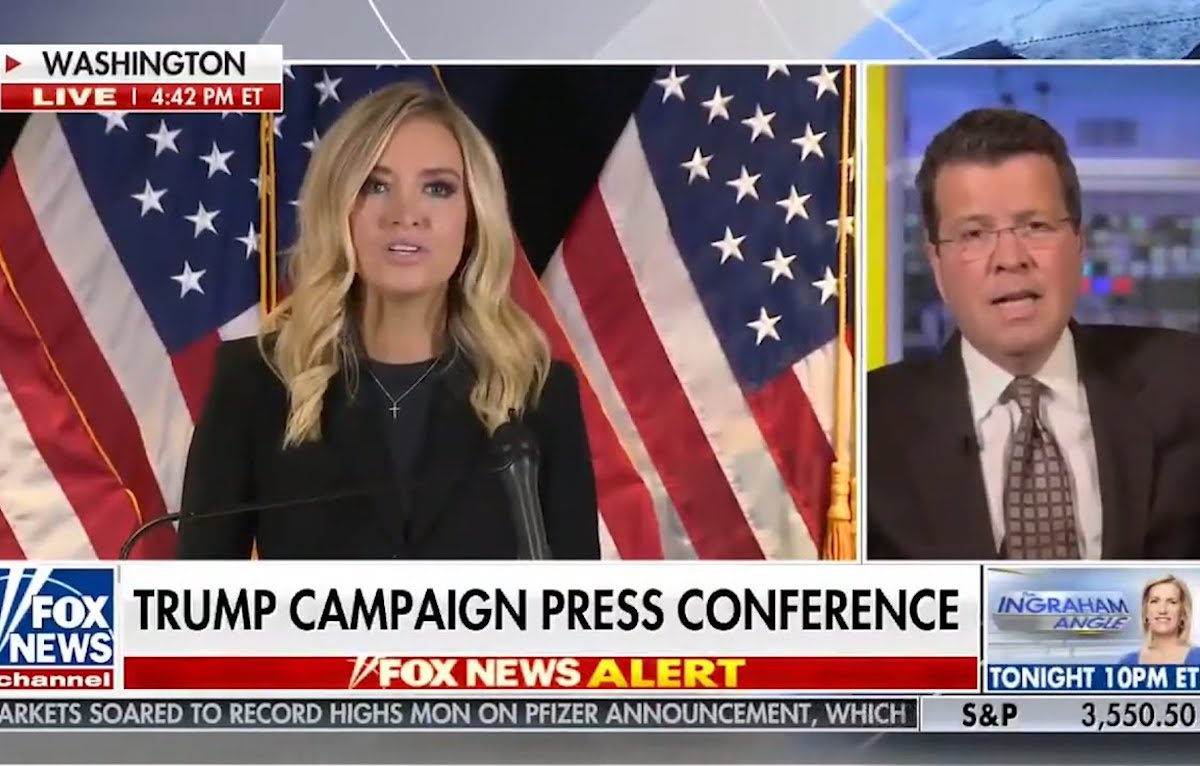 After four-plus years of supporting and enabling Donald Trump (and many more years laying the groundwork for the toxicity that’s taken over our entire political landscape and allowed Trump’s ascension), Fox News has decided to cosplay a network with principles. What an extreme coincidence that this is happening in the days after Trump lost the election, when the stakes are basically nonexistent.

On Monday evening, Kayleigh McEnany once again used her platform as White House press secretary to act as a Trump campaign mouthpiece and spout completely baseless claims about illegal voting. Those claims are so baseless, in fact, that even Fox News refused to give them any more air time (beyond the countless hours they’ve already given them).

Fox News just cut away from @PressSec, saying the network could not in good conscience continue to air her false claims, for which she has provided no supporting evidence.

Anchor Neil Cavuto interrupted the feed as McEnany was talking about only counting the “legal” votes—a thing that is already happening without the Trump administration’s input.

“Whoa whoa whoa,” said Cavuto. “We have to be very clear that she’s charging the other side is welcoming fraud and welcoming illegal voting. Unless she has more details to back that up, I can’t in good countenance continue showing you this. I want to make sure that maybe they do have something to back that up but that’s an explosive charge to make, that the other side is effectively rigging and cheating.”

Fox has been pushing the idea that Democrats are “rigging and cheating” this election for months. The hosts do it, the guests do it, and Donald Trump does it during the hours-long call-in sessions they’ve been giving him during the campaign. But good for them for finally pretending to be above it now that Trump has literally no power over them.

If anything, the network now has the power, since Trump and all of his campaign staffers and administration officials are likely going to be begging Fox to give them relevance after January 20th. They’re going to need the network for commentator jobs and for coverage of all of their inevitable forthcoming books. Fox News, on the other hand, can’t possibly feel as trapped under the thumb of this administration as they have been, or feel like promoting them would be as beneficial. That power shift does not equal principles, though.

It probably also hasn’t helped this relationship that Trump has been growing in his attacks on Fox News whenever they offer the tiniest bit of criticism, even when they’ve just been reporting polling results or giving airtime to a Biden campaign surrogate. Trump’s criticisms of the network aren’t totally new, but they have been growing in recent weeks. And last week in Maricopa County, Arizona, pro-Trump protesters chanted “Fox News sucks” after the network called the state for Biden.

If it were up to Trump, Fox would only present polls that favor him, and they would have refused to acknowledge Joe Biden even exists—except, of course, to talk about the purported corruption of his son Hunter, who has no ties to the campaign whatsoever. Trump and much of his most fervent supporters are so disconnected from reality that they automatically see any negative news as “fake news.”

Fox News has been an essential part of pushing that narrative to viewers and making sure the distrust of media was as deeply ingrained in their audience as possible. Yet, being a part of the media themselves, it was inevitable that it would eventually come back to bite them.

Honestly, everyone here is getting exactly what they deserve.