Four Awesome Anime for Your Next Girls’ Night In

Cartoons are awesome! Animation as a medium is so diverse that you can engage virtually any audience with a huge litany of aesthetics with incredible narrative control. So, maybe it shouldn’t be too big of a surprise when it seems anime has an unusual pull to women (and sexual minorities, while we’re at it) in how it attracts people who want divergent perspectives from the majority-centric media while they’re relatively young and first teething for their media preferences. I know that was the case for me. So, I up and made a short little list of shows that appeal to ladies who may just wanna explore the whole anime thing for themselves, and maybe invite a few friends while they’re at it.

Now, beware that this list isn’t exactly based on what’s necessarily the most “accessible” towards new anime fans, but none of these shows require any sort of weird knowledge on weird fandom niches or the like. It’s focused on lady-positive shows that heavily feature not only healthy, relatively real-feeling romances and friendships but engage a women-centric audience by presenting certain (healthy) engineered fantasies that you just don’t see in a lot of media. In other words, just let your heart go doki-doki like a dummy, and you’ll know the show’s working for you and anyone happening to share the couch with you at the time. The anime world can be tricky to navigate, so I’m here, hot coco and fuzzy blanket in-hand, to guide you beginners into 4 shows (falling into no particular order) that I feel demonstrate kick-ass ladies and shiny knights in a relatively thoughtful, but blush inducing package all the same. 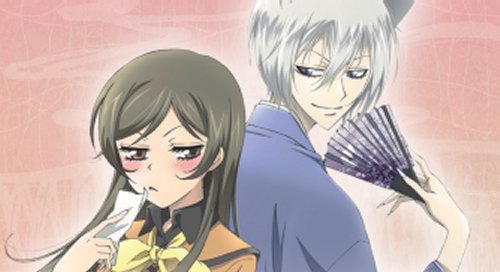 Archetypally good natured but ditzy high school lollygagger Nanami Momozono finds herself thrown to the winds when, one day, debt collectors seize her home at the same time her only guardian and father suddenly vanishes to evade his fiscal troubles. All is not lost when things get even battier, and she soon winds up becoming the goddess of a small shrine after saving the previous overseer from a dog attack. The fun stuff starts when she meets Tomoe, a ruthless and highly valued fox familiar that’s been the caregiver of the shrine since the previous god (the one hero girl just met) disappeared 20 or so years ago.

So starts the journey of Nanami as both a girl and god in a lovely little coming-of-age tale, following her adventures in tending to the troubles of both the spirit world and her own. Nanami, as a character, grows from being relatively rote into a charming and strong-voiced girl that doesn’t back down when she feels mistreated or wronged in some way by Tomoe or the various other supernatural sillies that she gets mixed up with while keeping her personal values close to heart when they need to be. As far as story construction itself goes, the show’s far from perfect, with a bunch of narrative beats feeling somewhat contrived and unattended (I mean, it’s shōjo after all), but it overall does nothing to damage the overall charm of a colorful, pretty cast and their surrounding relationships in a story that’s as soft and bright as the surrounding color pallet. 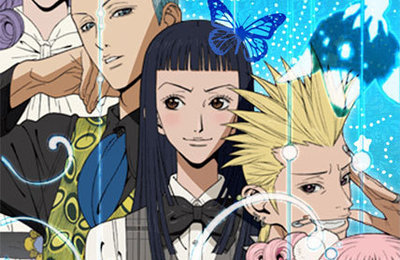 Yukari Hayasaka is a pretty princess trapped in a brick-and-mortar tower of rigorous academia where you’re either utilized or totally devalued. That is until one day she catches the eye of some dude with funky-ass piercings and striking blonde hair who spouts some nonsense about her being a model and eventually convinces her to come by a studio for a makeover. The change is small—only some light makeup, a hair trim, and a quick clothes change—but Yukari definitely feels the weight of the moment. After spending a whole adolescence unfulfilled and unhappy with the constant weight of a rigorous academic schedule, it’s not surprising that, after a little resistance, Yukari decides to veer from the gilded academic path and, after discovering what a great creative outlet making clothes can be, starts to find a social niche for herself among the fashion weirdos (one such character being an extremely tasteful and well done transgender representation).

What makes this show incredibly special and resonant to me as a lady personally (to the point of being probably my second-favorite series on this list) is its hard-hitting depictions of just how women are expected to handle relationships and a sincere, relatively subtle, but nonetheless honest story about developing relationships and identity in a world that doesn’t always necessarily seem to support that kind of growth—and it’s packaged up in a pretty damn artsy and diverse aesthetic. Aside from the main couple, there are several very mature and nuanced relationships that progress, strain, and grow in very real ways. Also, for all you Franz Ferdinand fans out there, there’s a surprise in the ending credits for ya. 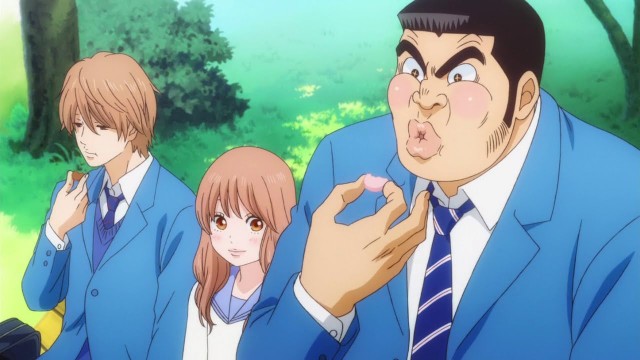 Takeo Goda has a long and sordid history of just not being able to get girls. He’s got the frame of a gorilla, but his insides are more like that of sweet pastry crème that can come gushing out at any moment. His various girl troubles are compounded by the way pretty-boy and best friend Sunakawa seems to do better with everyone he’s interested in (there’s a cute reason for this, but you’re gonna have to watch the show to find out). One day, fate comes Takeo’s way when he helps sweet popular girl Rinko Yamato out of being molested on a train. She soon gains more interest in him when he eventually saves her from a falling pillar, but for some reason, it takes a while to get through Goda’s skull what’s going on. He eventually gets it, and all that ensues will require instant access to an insulin pen.

Now, this is a sweet show. It’s a lovely, clever story about reciprocated kindness between friends and lovers that even has a bit of a brain to it at times, but it isn’t exactly the kind of show you’d expect to sustain any kind of real interest for 24 sum episodes. A beastly boy that you’d typically expect to be completely ignored romantically falls in love with the popular girl due to some totally sweet circumstances that bring them together, in this case just a quick life and death situation or two. It’s a premise so airy and sweet that you’d expect a toothache long before any sort of substance comes around … and … well … yeah, there’s not much to the story to begin with, let alone carry it along for 20+ episodes.

There seriously wouldn’t be much of anything at all if not for the various characters that get mixed up in the main couple’s lives, who are all lovely in their own right. And yet, it still manages to be a perfectly enjoyable show that engages you in the lives of the main relationship, partially due to their various adorable adventures and interactions that wind up leaving you slack-jawed with how you were just tricked into falling in love and enjoying every moment with these toothache-inducing little creations. Every cutesy moment feels genuine and consistent throughout the show, and more often than not, they serve to demonstrate some nice growth in the already impossible relationship between Takeo and Rinko, and it’s a treat to watch. 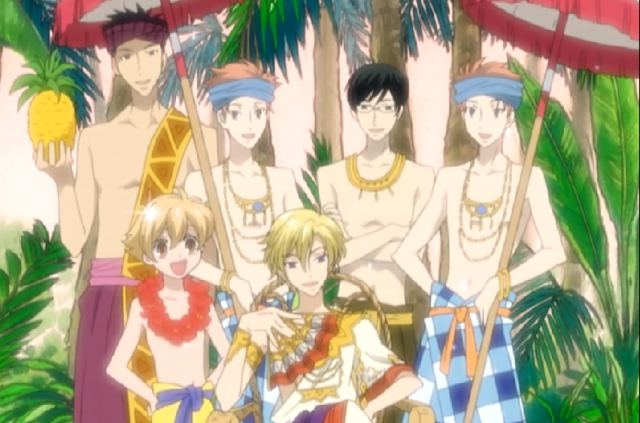 (Annnnnddd the least surprising list placement of the year goes to I! Listen as the crowd goes wild!)

Now, I stated in the beginning that I really didn’t intend to put these shows in any sort of qualifiable order, but this show seriously deserves top billing in any sort of discussion about shōjo in general, whether about its history or influence as a genre. It seriously is difficult to understate the importance of this show in both how it serves as a warm-hearted but powerful parody of the genre and its effect on it (shōjo) in more recent years. It’s a show by women for women, and it works. If you don’t know the story from your anime friends yet, Haru Fujioka is a lay-low girl that finds herself down quite the rabbit hole when entering the world of the insanely wealthy and elite of Oraun Academy, which she personally got into on academic scholarships. There, she’s suddenly forced to tear herself from obscurity when an accident leading to a broken vase has her mixed up with the doofuses of the school’s local host club (basically a prince charming simulator for a price), eventually working for and getting closer to them.

The main draw of this show, without a doubt, is awesome leading lady, Haru, herself. She don’t give grass about gender roles or signifiers, and it’s downright inspirational. Part of her appeal also comes from a take-charge attitude and self-honesty that I also believe plenty of girls can look up to. The appeal of the resident goofs of the host club comes from how they all seem to be genuinely written to appeal to girls in everything from the cheesy beefcake pandering throughout the show to how their various endearing personalities shine through in various scenarios with Haru. From Alice in Wonderland homages to surprisingly complex characters to resident king B Tamaki lamenting in a corner like a toddler, to some applause worthy moments when she stands up for herself, even when it’s hard, every moment will sink you deeper into the show’s spell. It’s always engaging, and more often than not, fairly thematically pertinent. As far as this list goes, Oraun completely deserves its crown as both an unabashed classic and much watch for veterans and newbie anime watchers everywhere.

So, I’ve probably missed tons of shows that would fit into this little category. What do you all personally think I could have added?