Fossil of Largest Wombat Ever Discovered 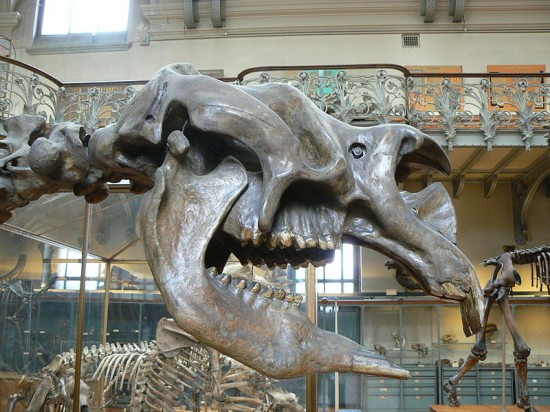 Palaeontologists in Australia have found a virtually complete skeleton that is the largest known example of a diprotodon, a giant wombat-like animal. This diprotodon is comparable in size to a four wheel drive vehicle and when alive looked similar to a rhinoceros. Researchers say the three-ton monster, known for having massive tusks and a small brain, may have lived approximately two million years ago. Diprotodons were plant eaters, and are believed to have gone extinct around 55,000 years ago as a result of either the arrival of the first indigenous people of Australia, or climate change, or a combination of the two.

The skeleton was found on a remote cattle station near the Leichhardt River between Normanton and Burketown in Queensland. The area has become known for being saturated with the remains of prehistoric megafauna. Led by professor Sue Hand, a palaeontologist at the University of New South Wales, the researchers found the fossil after they spotted an arm bone sticking out of the ground. Further digging showed that the bone was connected to a shoulder blade, and ultimately the entire skeleton was unearthed. The bones were found next to the tooth of a giant goanna (a type of lizard) that the researchers suspect may have become dislodged while the creature was feasting on the carcass of the diprotodon. The fossil is virtually complete, which makes it one of Australia’s most significant prehistoric discoveries.

(via The Telegraph Photo via Wikimedia Commons)