#FollowFriday is a new weekly feature where we tell you who to follow on Twitter. On Friday. Get it? 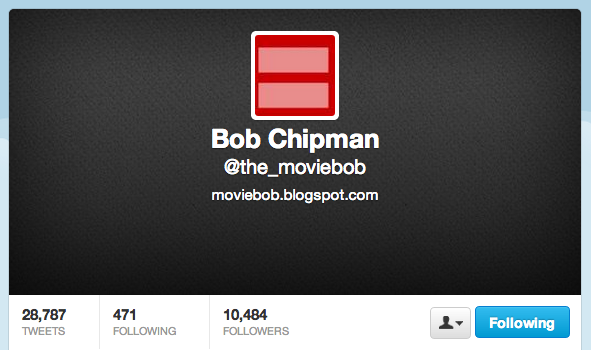 Last week we started a feature here on Geekosystem where we help you follow the best people on Twitter. Because it’s #FollowFriday, we’re going to focus on one person’s Twitter account each week and tell you why you should follow them. This week it’s Bob Chipman, aka @the_moviebob.

Who He Is: MovieBob first came to prominence on the internet due to his long-running Youtube series, The Game Overthinker, which he started over 5 years ago. Now it’s over at Blip.tv, which also houses internet commenters like Nostalgia Critic, Nostalgia Chick, the Cinema Snob, and Red Letter Media. His videos are charmingly low-budget much in the same way that Critic’s are, but still come backed with a lot of really great commentary (which starts in at about 3:50 for this particular episode below):

Chipman also runs Overbytes, which is sort of like The Game Overthinker but without as much of the story-driven moments (which can be a little difficult to break into as a first time viewer); Escape To The Movies, a weekly show he does for The Escapist Magazine; and The Big Picture, another show for The Escapist that’s a bit more free-form. And he runs a blog where he writes at length about movies and the gaming industry. He also has a book out that’s all about Super Mario Brother 3.

Why You Should Follow: To be perfectly honest, I didn’t know anything about Bob’s career as a vlogger before I followed him on Twitter — all I knew of him came from his insightful tweets about stuff that nerds like, which are capable of standing alone from the rest of his work on the web.

While he’s a bit stuck on retro games from the ’80s and ’90s and can get kind of cynical about big-name franchises sometimes, overall he’s very balanced and interested in talking out the stuff he does or doesn’t care for as a critic. He’s also one of those guys who gets why it’s kind of shitty to harrass cosplayers or that “fake geek girls” aren’t an actual thing to be worried about, which shouldn’t be refreshing and uplifting in 20-freaking-13 already, but it still kind of is.

Y’know what would fix EVERYTHING? Last scene of the final Abrams “Star Trek”: Chris Pine trying on a gold sash, Quinto deciding on a goatee.

On the recent news that J.J. Abrams will be giving up the director’s chair on the Star Trek rebooted franchise.

Confidence and swagger can make ANYTHING cool. Case in point: Led Zepplin had flutes in their songs, and sang about HOBBITS.

This was part of a larger discussion about Riddick and… well, how ridiculous it was underneath the badass exterior.

When you think about it, it’s weird that unicorns don’t actually exist. A horse could really use an offensive weapon.