The booties were cute, too. 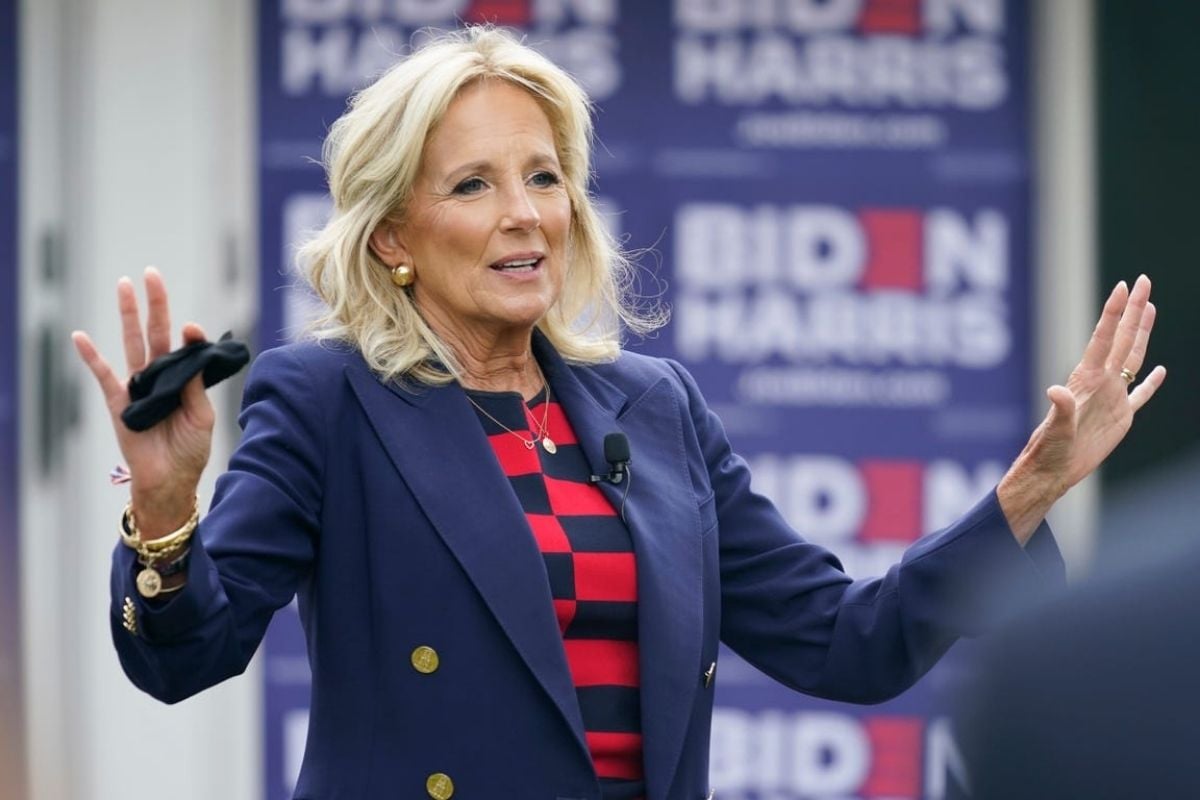 Conservatives are losing their minds over FLOTUS Jill Biden wearing stockings with a pair of black booties. They’re clutching their pearls over her daring to wear anything that isn’t pastel and matching as FLOTUS. This outrage, reaction, and behavior towards Dr. Jill Biden is sexist and shows conservatives’ skewed concept of what is important in this day and age.

Instead of focusing on COVID-19 relief or the problems we have in the United States when it comes to gun control, conservatives are focusing on what Dr. Jill Biden is wearing. That is sexist, derogatory, and critical of a woman who has done nothing but support her country, her family, and her husband as POTUS. And if conservatives spent all this time and effort in actually covering something newsworthy, our world would be a better place for it.

Coverage about what she was wearing, and judging her for it on the basis that she should be more conservative about what she wears, is sexist. It’s old-fashioned and fosters stereotypes about women and the role we play in the lives of men. And it pressures us, as women, to be subservient and docile, as if we shouldn’t rock the boat. We shouldn’t have to fear that as women, and I think Dr. Jill Biden understands that with her no f**ks attitude when she stepped off Air Force One.

Another surprising reaction when it comes to Dr. Jill Biden’s outfit is people saying that she looks “frightening.” What is it about a woman who wears fishnets and booties that scares you? Is it the fact that she probably didn’t ask for anyone’s permission when it came to what she wore? Is it the fact that she’s an independent and forward-thinking woman that scares you? Please explain, because there is nothing frightening about her choice of clothing.

Then there are those who are saying that Dr. Jill Biden is an older woman who should act her age. I didn’t know there was a specific cutoff date when you couldn’t wear cute stockings and booties. Please explain that, as well. When we hit 30, 40, or 50, is that when we stop wearing cute things we like? Is there a graph that we should pay attention to that bans shorts, jean jackets, or side parts? Because from where I’m standing, this excuse is lazy because there is no standard for how a woman should dress.

But the most infuriating thing about this outrage over Jill Biden’s outfit is that her predecessor, Melania Trump, wore a jacket that said, “I really don’t care. Do U?” during a trip to visit immigrant children at the border. Conservatives didn’t care and made excuses for it, but Dr. Jill Biden in stockings and booties is apparently a national outrage in the same vein as former President Barack Obama’s tan suit and former FLOTUS Michelle Obama’s sleeveless dress.

The point being, FLOTUS Jill Biden doesn’t have to ask permission, does not look frightening, and isn’t waiting for someone to tell her what is FLOTUS-worthy. She wore something cute, simple as that. And no one gets to judge her for that; especially Conservatives who are clutching their pearls in alarm at the picture of an independent woman.