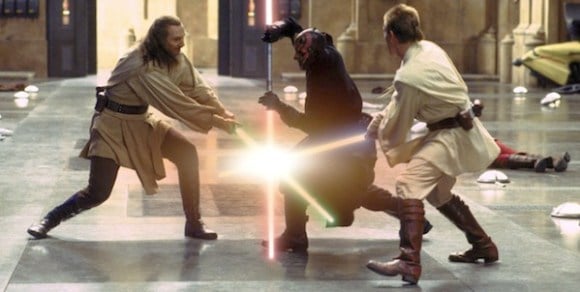 If you need your daily dose of insanity, just imagine Florence Welch of Florence and the Machine in the picture above instead of Ewan McGregor. Now imagine that that glorious insanity became reality.  According to recently circulating absurd rumors, it has. The Sun has posted a story claiming that we can expect to see Florence in the next entry in the Star Wars franchise.

Casting rumors can get pretty unbelievable, but this is completely out there.  While we now know that Carrie Fisher, Mark Hamill, and Harrison Ford have been approached regarding the film, the suggestion that Florence Welch is a favorite for the film is a bit more far fetched.  And given that The Sun reports that “Michael Jackson’s kids, Prince, 16, and Paris, 15, are pushing for auditions,” in the same article, I have my doubts personally about the truth in this rumor.  On the other hand, if Florence does indeed land a spot in the film, it would be the singer’s second acting job, as she is expected to appear in Terrence Malick‘s next film project.  Plus, the singer is known both for a wardrobe to rival Padmé Amidala and for her otherworldly music, so I can see her fitting into the Star Wars universe in some way.  Still, I’m much more inclined to believe that we could hear her singing than see her acting in Star Wars: Episode VII, if she becomes involved at all.

Episode VII is currently expected for 2015, with J.J. Abrams set to direct the film.  Given the reception the prequels have received, there’s certainly room for speculation about the state of the film and it’s stars, and to be honest, I wouldn’t mind seeing Florence Welch travel through space. But with the movie still far, far away and the unlikelihood of this casting choice, I’m setting my sights on more likely candidates.