How do you become the person you're supposed to be when you don't know what that is? 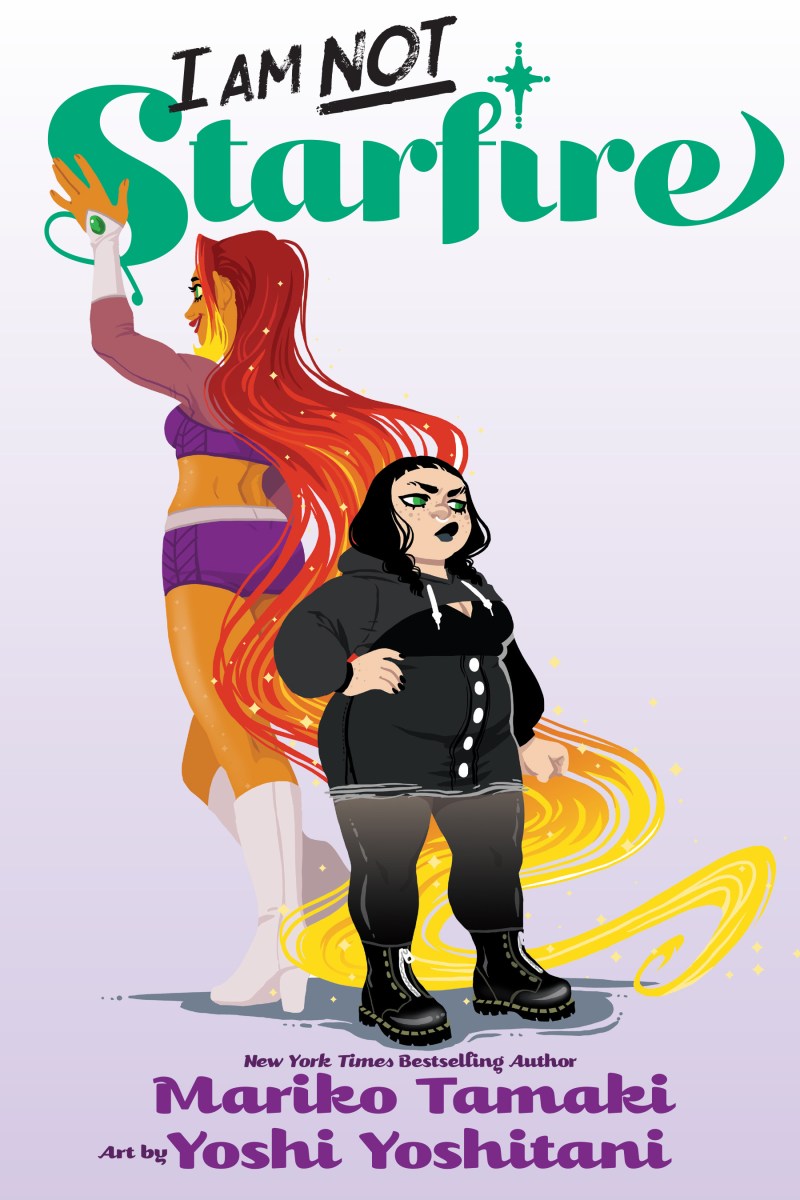 It’s no secret that when I saw the cover and premise of I Am Not Starfire, I immediately added Mandy to my ongoing list of fictional children. Now that we’ve gotten a peek at some of the art and more details of the plot, I can wholeheartedly say that this is the kind of story I wish my “unsure of what to do in life” adolescent self would’ve had all those years ago.

Check out the new images by artist Yoshi Yoshitani (Zatanna and the House of Secrets) here: 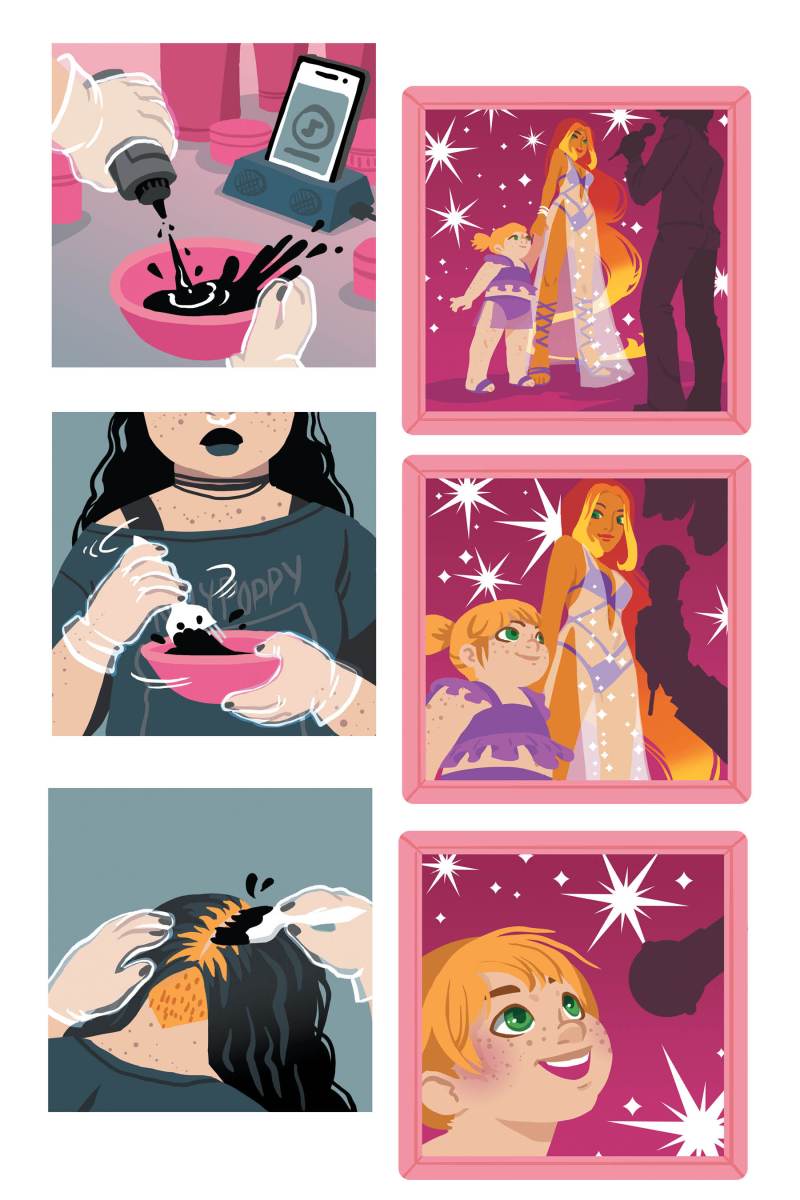 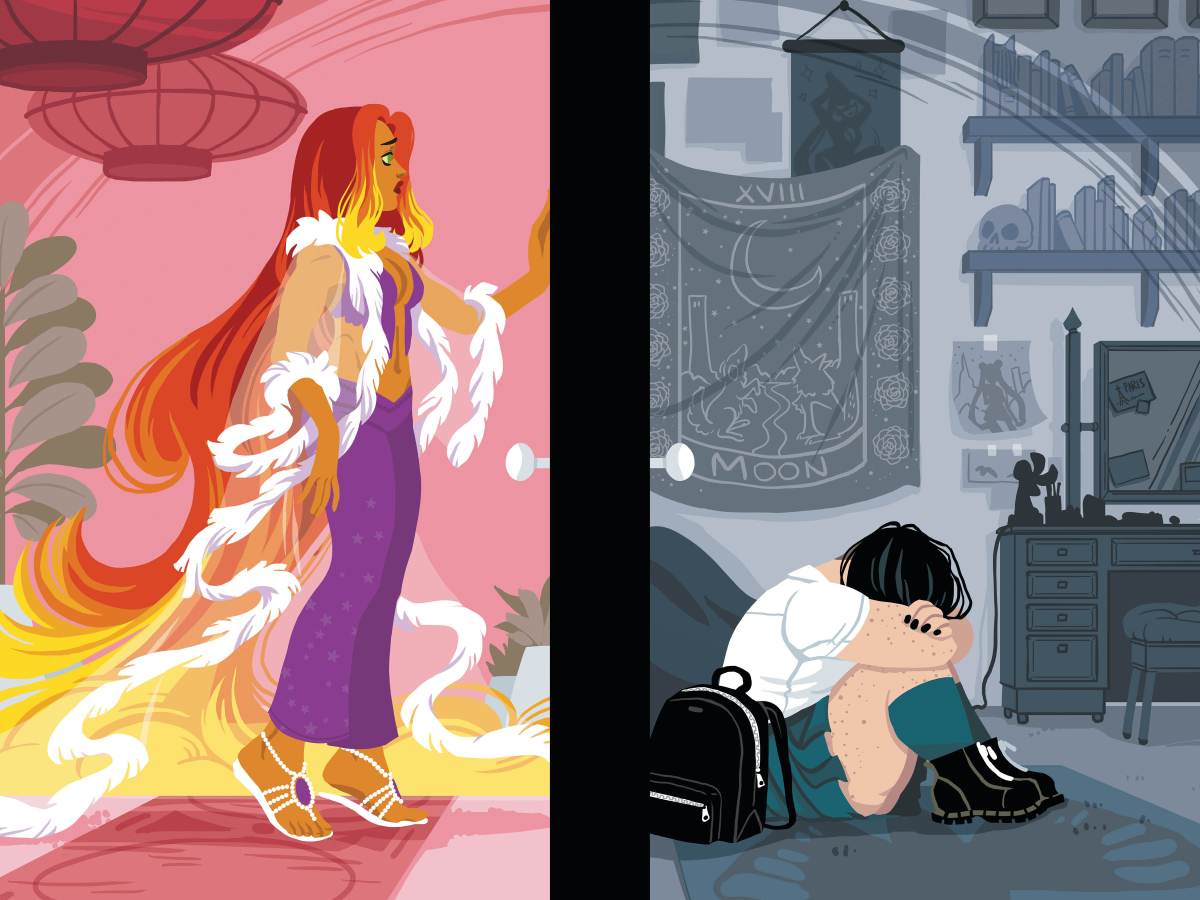 I am in awe of Yoshitani’s art style, especially the color contrasts between Mandy and her mother, Starfire. I especially love that despite Mandy’s dark aesthetic, there’s still detail in her design. Some people take dark and goth to mean soulless, immediately writing that kind of character off, but there’s clearly a lot of emotions circulating on the pages. Even without any dialogue, these images tell a story. 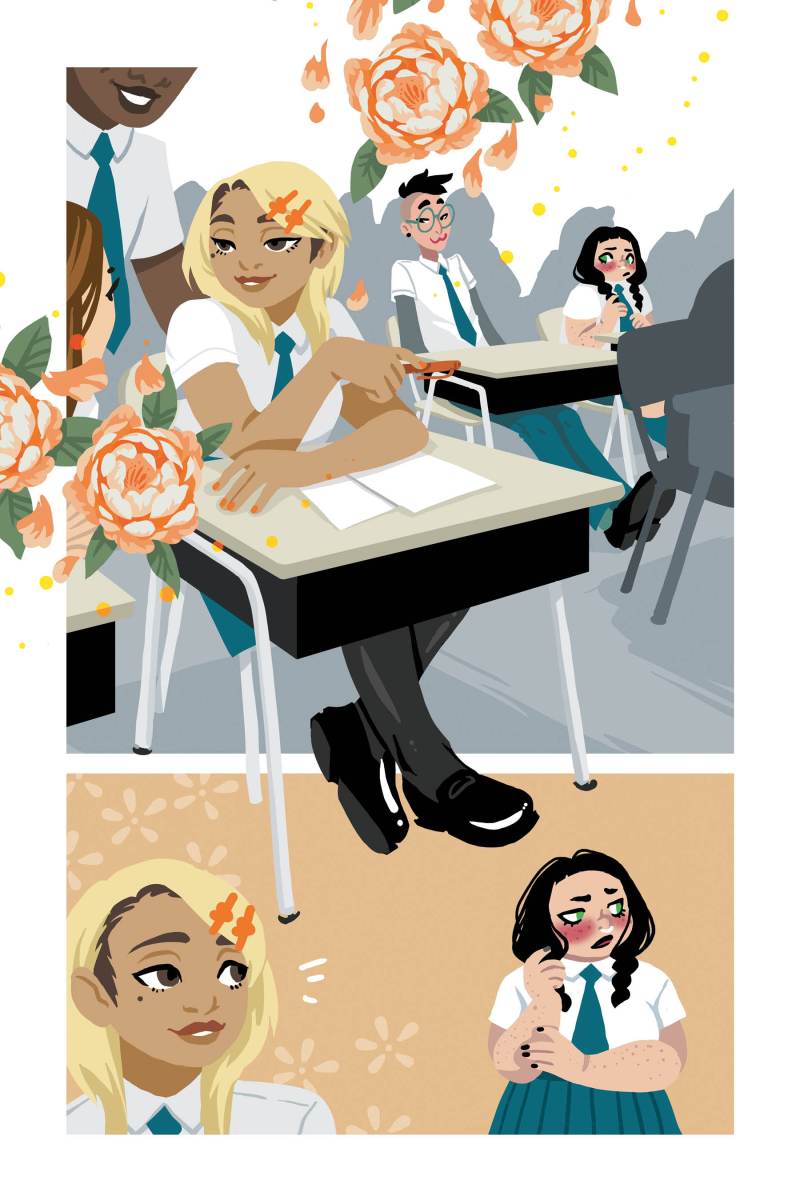 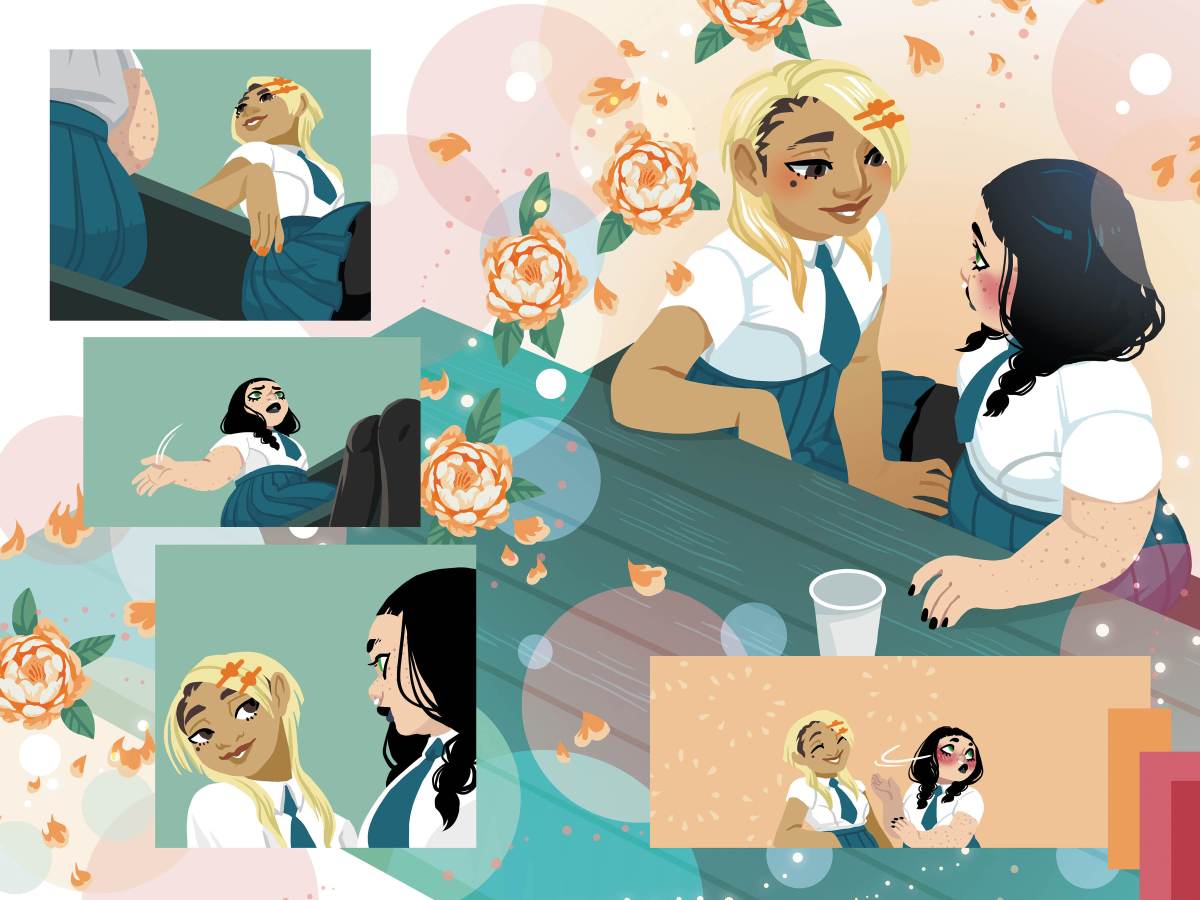 I Am Not Starfire is being written by New York Times bestselling author Mariko Tamaki (Harley Quinn: Breaking Glass, This One Summer, and Laura Dean Keeps Breaking Up with Me). The plot summary for Mandy’s adventure is as follows:

Seventeen-year-old Mandy, daughter of Starfire, is NOT like her mother. Starfire is gorgeous, tall, sparkly, and a hero. Mandy is NOT a sparkly superhero. Mandy has no powers, is a kid who dyes her hair black and hates everyone but her best friend Lincoln. To Starfire, who is from another planet, Mandy seems like an alien, like some distant angry light years away moon.

And it’s possible Mandy is even more distant lately, ever since she walked out on her S.A.T.s. Which, yeah, her mom doesn’t know.

Everyone thinks Mandy needs to go to college and become whoever you become at college, but Mandy has other plans. Mandy’s big plan is that she’s going to move to France and…do whatever people do in France. But then everything changes when she gets partnered with Claire for a school project. Mandy likes Claire (even if she denies it, heartily and intensely). A lot.

When someone from Starfire’s past arrives, Mandy must make a choice: give up before the battle has even begun, or step into the unknown and risk everything to save her mom. I am Not Starfire is a story about teenagers and/as aliens; about knowing where you come from and where you are going; and about mothers.

“I feel so lucky to be able to work on these books for DC, to write superhero comics and work with incredible talents like Yoshi Yoshitani,” Tamaki said in regards to her work. “I wanted to work on a book about finding power in what you are (versus focusing on what you aren’t). I think Starfire is such an amazing character, so larger than life and just overall fabulous. She’s really a joy to write. I’m so excited for people to read this new comic and meet her daughter Mandy.”

Yoshitani added, “Creating this graphic novel has been a real dream come true. Partnering with Mariko Tamaki to create a world filled with familiar characters from my childhood, brand-new faces, and flashy superpowers, underpinned with feelings of teenage angst all while trying to do justice to longtime DC readers and those picking up comics for the first time has been a fulfilling whirlwind. We did a lot of great work, and I’m proud of what we made. I can’t wait for readers to pick it up!”

I think the reason why I instantly vibe with Mandy (along with my kneejerk reaction to protect plus-size queer kids) is that I feel like there’s always room for stories that explore the pressure placed on teens to just … know what their plan is for the rest of their lives.

Teens are pressured to make life-changing decisions based on the premise that adults just know what’s best for them, and even then, depending on the topic of conversation, they’ll be deemed as being too young to understand. I remember being expected to just know my entire career path as a teen but also being told I was too young to understand things like sexuality (or told that it was just a phase).

A lot of times, adults aren’t willing to do the bare minimum and just … ask what kids want, or at least understand that it’s okay if they don’t know yet. There need to be more stories that are truthful about development: it’s ongoing, even for adults, so a 17-year-old having questions is fine.

I also find it interesting that this story is from the POV of a girl who some people will instantly assume the worst about. She’s fat. She’s goth. She’s queer. Folks are gonna look at her and think that she’s just some moody kid who needs to get over herself instead of looking at the bigger picture. We see clearly that, once upon a time, she was fine with the bright orange hair and purple clothes, but I can’t help but notice the microphone put in her face at a young age. Living up to your parents’ standards is already hard, but when that parent is a heroine known throughout the world (and the fandom) for being the happy, always optimistic Titan?

And since the parent is already established, I’m sure folks will expect the same of her child, that she’s got her shit together and everything’s already laid out for her because her mom’s both famous AND someone who fights for the good of humanity.

I have a feeling that this won’t just be from Mandy’s perspective. From that picture of Starfire standing outside her room, I get the feeling that we’ll be able to see Starfire learning and growing as more than a heroine, but a mother. I’m hoping there’s a realization that Mandy doesn’t actually hate her mother, but rather, she hates the expectations that come with being the child of Starfire and, well, being a 17-year-old whose expected to follow a path that she’s not quite sure she wants.

Also, Tamaki’s quote about finding power in what you are (versus focusing on what you aren’t) really speaks to me. Mandy doesn’t have to be Starfire, nor should she be, and I think that’s a really important message in the YA genre.

Just … be yourself, and work on what you can do, right now.

You can pre-order I Am Not Starfire right over here! The graphic novel is set to release on August 10, 2021.