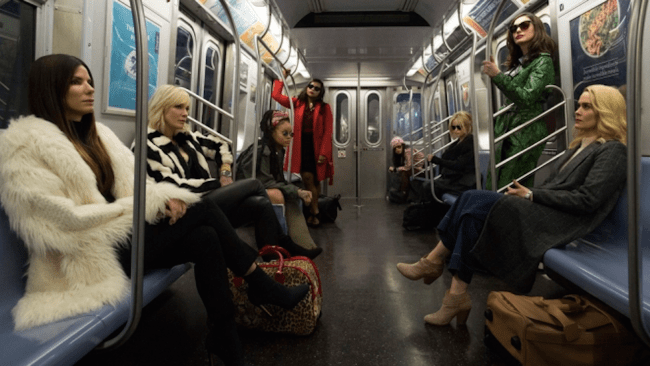 There are few film genres that are both as exciting and as nuanced as the Heist Movie, as it provides both action and the possibility for in-depth character work from an ensemble cast working together toward a common goal. Which is why it’s so exciting that an all-female cast is getting the opportunity to play with those elements in the upcoming film, Ocean’s Eight.

The film stars Sandra Bullock, Cate Blanchett, Rihanna, Mindy Kaling, Awkwafina, Helena Bonham Carter, Anne Hathaway and Sarah Paulson as a team of jewel thieves aiming to hit up the high-profile (and highly lucrative) Met Gala in New York City to get that money. As the Met Gala is one of the most fashion-forward events of the year, it makes sense that this cast of characters would be stylish as hell.

I have to say, as awesome as this entire cast is — and it really is, as it features some of my favorite female performers of all time — the casting choice I’m most intrigued by is Awkwafina, who won my heart with her songs NYC Bitche$ and My Vag. I didn’t know she even did the acting thing (though she’s been in Neighbors 2: Sorority Rising, Dude, and did a voice in Storks), so the fact that her unique and distinctly New York City sensibility is going to be a part of this New York-based movie makes me really happy.

Oh, and did I mention that Rihanna’s character goes by the name of Nine Ball? Also, props for a decent ratio of white women to women of color on this team, though would it have been that hard to go four and four on that? Maybe add one more in (the purely hypothetical and made up by me) Ocean’s Nine? If that one more is Gina Rodriguez, I will be the opposite of upset.

I was already a huge fan of the Ocean’s Eleven series, but these awesome women are breathing new life into the franchise, and I am so here for this. What about you? Will you be checking out Ocean’s Eight when it comes out in June 2018 (i.e., way too far away from now)?