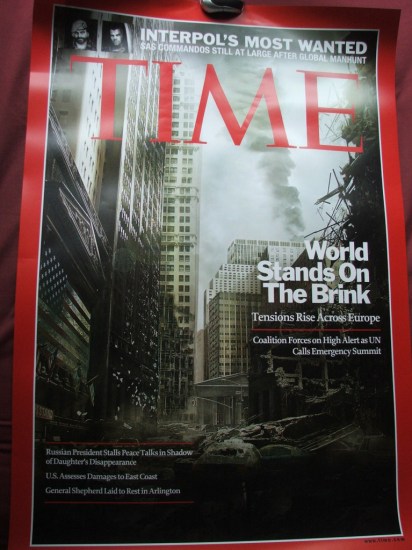 For the first time, an authorized Time cover has been created to promote a commercial product, which just so happens to be Activision’s Call of Duty: Modern Warfare 3. The cover, seen above, depicts a destroyed Wall Street with the headline “World Stands On The Brink,” which, funnily enough, is exactly how Roger Ebert, noted video game naysayer, felt when he tweeted out that the first-ever authorized fake Time cover used to promote a commercial product just so happened to go to a video game, claiming that Time “sold its honor for a video game promotion” and it is “sad, sad, sad.”

Time claims they haven’t sold their soul to Activision (like the rest of the gaming world!), but after much deliberation, they decided granting Activision access to their famous name and template would help them reach a new demographic that they may not have ever been able to reach. Richard Stengel, Time’s managing editor, feels allowing Activision to use a fictional cover for their game isn’t very different from using fictional characters in conjunction with Time’s “Person of the Year” issue, something they’ve done in the past.

The fake cover is actually being given as a pre-order bonus, which is nice, because it is something that isn’t pre-order, store-specific DLC. Modern Warfare 3 is slated to release on November 8 of this year.