We love a good heist, and the whole Western things starts to make a little more sense.

After angering the Internet by saying Firefly shouldn’t come back for another season, we’ve decided to make Glen go back and watch the show in its entirety. This week he watches episode two: “The Train Job.” 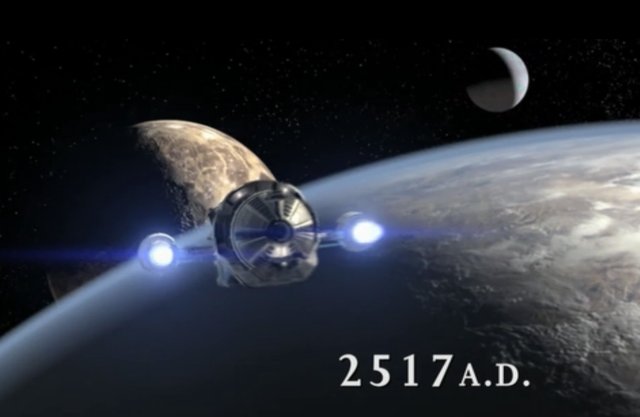 The introduction by Book at the opening of the show sets up the world better than the pilot did.

After the Earth was used up, we found a new solar system and hundreds of new Earths were terraformed and colonized. The central planets formed the Alliance, and decided all the planets had to join under their rule. There was some disagreement on that point. After the war, many of the Independents who had found and lost drifted to the edges of the system, far from Alliance control. Out here, people struggle to get by with the most basic technologies. A ship would bring you work. A gun would help you keep it. A captain’s goal was simple: Find a crew. Find a job, Keep flying.

The idea that humanity would have to leave Earth for a new solar system and begin terraforming hundreds of new Earths brings up the idea of how they got there. Generation ships, which would take hundreds of years to reach a new solar system could have been incubators for nostalgia, rendering the bizarre idea of the way Earth used to be that we see in Firefly. I kind of get the Western aesthetic now.

At the start of the episode Mal, Jayne, and Zoe are in  some bar on “Unification Day” the anniversary of the end of the war that Mal lost. 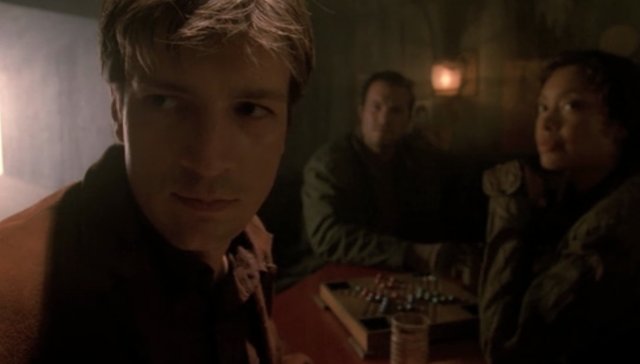 A wretched hive of scum and villainy.

A brawl breaks out, which seems to be what Mal wanted, but Wash has to fly in with Serenity and save everyone. Great captaining, Mal.

Mal and crew aren’t just on this world to start fights. They’re also there looking for work, which Mal announces they have found.

There’s crime to be done.

River is flashing back to weird government experiments while Simon is examining her, but Mal interrupts to wash blood off his hands. He and Simon are polite jerks to each other for a bit before Mal leaves, and River announces to no one in particular that “Mal” is Latin for “bad.”

Mal and Book seem to disagree on how great of a guy Simon is. Book seems to think Simon is pretty great for going to such trouble to save River from the Alliance, but Mal doesn’t seem convinced. Book isn’t sure then why Mal asked Simon to stay on board. Neither is Mal, and neither am I. 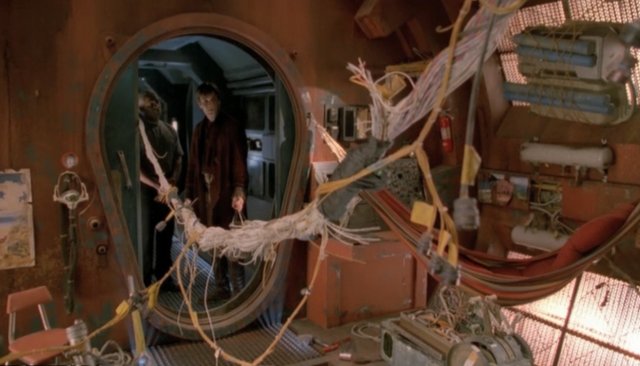 It’s probably not supposed to look like that, right?

Kaylee appears to have done something to the ship’s engine that upsets Mal. There’s some kind of wiring hanging around everyone, so Mal storms off to find her. She’s in Inara’s shuttle getting her hair done and talking about how dreamy Simon is when Mal barges in.

Remember last time when Mal was nice to Inara for a little bit? That appears to be over, and he’s being a jerk again. When he asks Kaylee what’s going on in the engine room she says she had to do some rewiring because “somebody won’t replace that crappy compression coil.” (She means Mal.)

This is now the second time we’ve heard Kaylee complain about the compression coil. She mentions it in the first episode when they land on Persephone, saying that if it breaks the ship will be stuck drifting in space. For that whole episode I was expecting it break. In screenwriting this is known as “plant and payoff.” You mention something early on that seems trivial at the time so that when a later event happens in the story it feels familiar to the audience. It’s something Joss Whedon does incredibly well.

Since this is now the second time the compression coil has been mentioned, I’m right back to expecting it to blow at any second. Mal seems less concerned. He orders Kaylee to go put the engine back in order, and he tells Inara they’re going to see a man named Niska about the job he got at the bar. Mal warns Inara about Niska’s reputation as a creep and orders her to stay on the ship. Aw, now he’s being kind of nice again.

Mal, Zoe, and Jayne go to meet Niska who shows off the dead guy he has in a freezer to prove what a creep he is. He explains the job, which is an old-school train robbery. He wants the Serenity crew to steal something from the Alliance in one of the train cars. Niska makes it pretty clear that he’s not taking no for an answer, so they take the job even though there’s a dead guy in the freezer.

It’s not long before Mal and Zoe realize the train is loaded with Alliance soldiers armed to the teeth. This seems to delight Mal who likes the idea of stealing something from right under the Alliance’s nose. 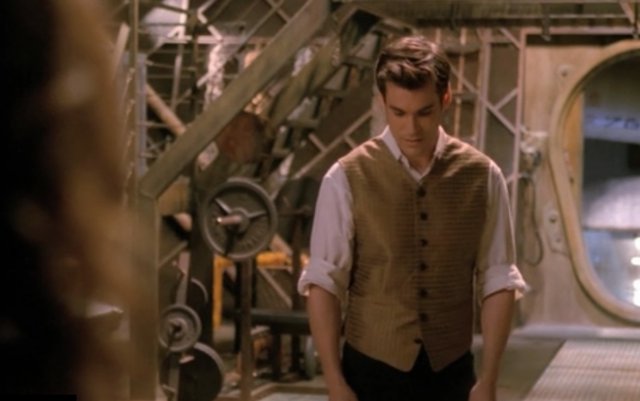 Simon shows off one of his many vests as Kaylee explains the train heist to him. As Mal and Zoe sneak in to the train car with the Alliance goods, Kaylee will lower Jayne down from Serenity. Back on the train Zoe pulls the cover off something that looks like an evil Companion Cube as Jayne swoops in on a cable. (Did I miss what it is they’re stealing?)

The heist is interrupted by an Alliance soldier, and the Serenity takes off with Jayne and the goods, but leaves Mal and Zoe behind. Jayne’s been shot in his goram leg.

The Alliance unloads everyone from the train and we finally learn what was stolen. The Serenity crew stole all the goram medicine. Six crates of “Pescaline D.” The medicine is reported missing, but an Alliance officer doesn’t seem to care. He tells his subordinate to ignore the report because they have better things to do — like chase floating garbage can decoy satellites?

The rest of the Serenity crew is arguing in the medical bay over what to do. Jayne wants to finish job and get Simon to fix his goram leg. Wash won’t leave without Zoe, and Kaylee just has a blind faith that everything will be fine. River creeps everybody with some weird rhyme about blue hands, and Book shuts everybody up by telling them that Niska won’t be happy to hear that Mal and Zoe were captured.

Speaking of Mal and Zoe, they’re back at the scene of the crime looking at a room full of sick people who could probably use some Pescaline D right about now. They have to pretend to be a married couple as their cover story. Classic.

The local sheriff seems more concerned about the missing drugs than the Alliance is, and he’s going to get to the bottom of this. He interrogates Mal and Zoe who claim they’re heading to Paradiso looking for work, but the Sheriff doesn’t seem to be buying it. He tries to trip Mal up with questions about his cover story, but since Mal is a Joss Whedon character he’s far too clever for that.

Back on the ship Jayne tries to bully everyone into leaving Mal and Zoe behind again, but he soon starts spouting nonsense and passes out, or as Wash puts it: 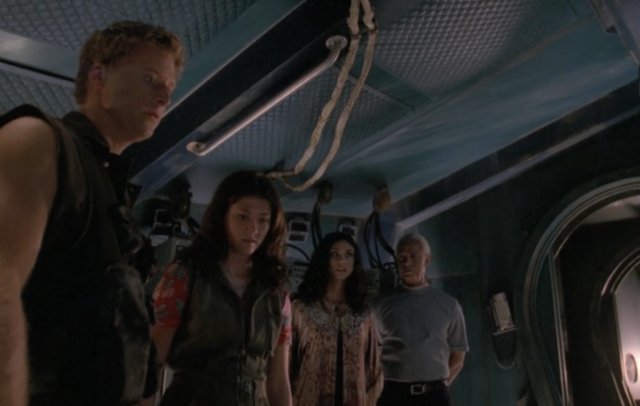 “Did he just go crazy and fall asleep?”

Simon drugged Jayne because he wasn’t comfortable with him in charge, because well, Jayne’s a crazy person. No one seems that upset to have Jayne unconscious.

The crew decides to rescue Mal and Zoe, but aren’t sure how to do it. Book suggests someone “respectable” go down and get them. That makes a sense. A nice respectable preacher should be able to go down and– oh. He means Inara. Companions get a good deal of respect in Firefly. Noted.

She walks in and slaps Mal in the face, which he deserves for a number of reasons, and asks the Sheriff to arrest him saying something about Mal accessing her accounts before she calls Zoe out by name. It seems the plan is to blow Mal and Zoe’s cover while spouting a bunch of new lies for the Sheriff to believe. 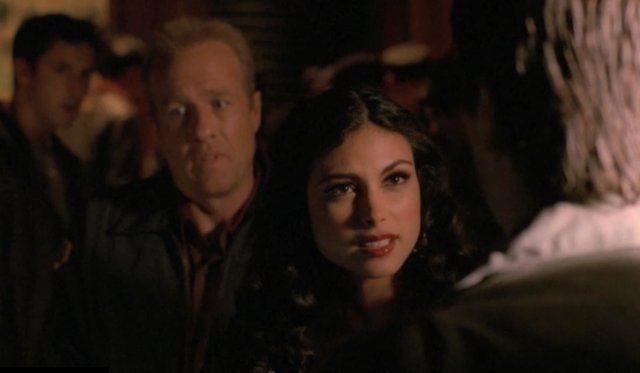 The sheriff buys Inara’s story and she leaves with Mal and Zoe in tow. They return to the Serenity to return the drugs to the sick people who need them. Maybe Mal doesn’t mean “bad” afterall, River. He’s doing the right thing. They’ll return the money to Niska. Those sick people will get better, and everything will be fine, right? 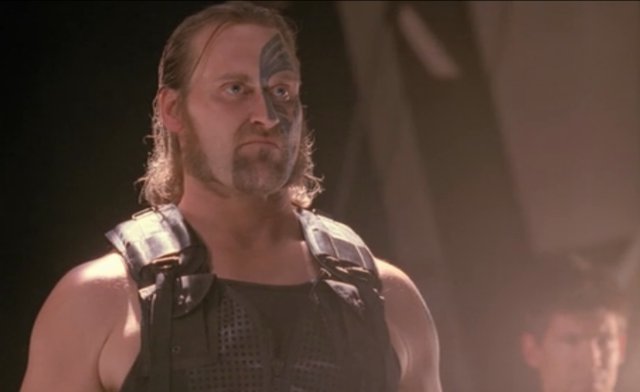 You, uh… you have something on your face.

Niska’s crew saunter on to the Serenity. Mal tries to negotiate the return of the money to call the job off, but the big guy with the weird knife is having none of it. A fight breaks out, and I bet everyone’s real sorry Jayne’s still half-drugged over in the corner.

Thankfully Jayne’s not too drugged to get a shot off at the last second to save Mal. Now that Niska’s crew has been dealt with, the Serenity crew can just return the drugs and everything will be fine. Right?

They decide to drop the medicine and then fly away before alerting the sheriff to its location. Unfortunately, the sheriff happens to be right where they’re leaving the medicine, and he’s armed and not alone. This doesn’t look good.

Ah, nevermind. The sheriff’s just a big ole’ sweetie. He respects that Mal ultimately made the right choice and returned the medicine. They come just short of bro-hugging before the sheriff leaves with the medicine and the crew heads back to the ship.

The goofy Alliance officer who tried to ignore the medicine theft is met by some creeps in suits who tell him they’re here to investigate a theft, but they don’t mean the medicine. They’re looking for River. 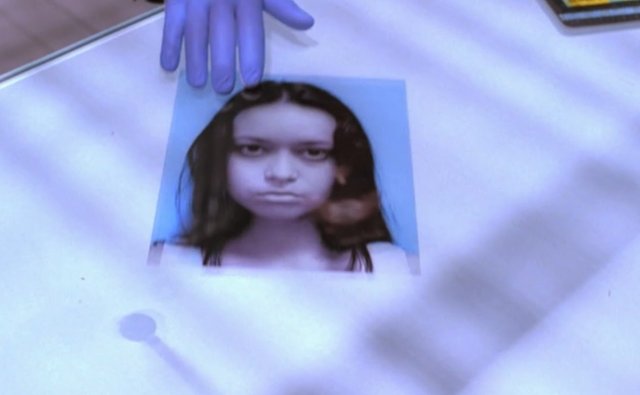 I’m still waiting for that goram compression coil to blow.