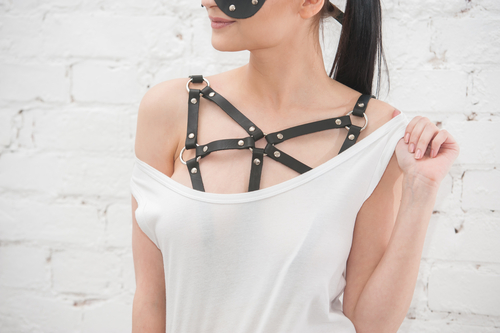 Editor’s note: The author’s name has been changed at her request to protect her privacy.

I lead a double life, which isn’t nearly as exciting as it sounds and doesn’t come with a cool cape. Most people know me as a successful, professional feminist woman with a strong voice that I’m not afraid to use to speak out against misogyny and gender inequality. What few people around me know is that I’m also in a full-time submissive relationship with my Dominant husband. Yep, my husband says and does the most misogynistic things imaginable to me, and I melt like a popsicle in the sun.

The feminist-submissive dichotomy is deeply weird and it’s taken me a long time to get comfortable with these two seemingly incongruent sides of myself. Fortunately, the pushback against misogyny women have enjoyed under President Obama’s administration has gone a long way toward helping me realize that enjoying freedom of choice also extends into the most private parts of my life.

My Dominant/submissive dynamic is pretty typical by most standards in the D/s community. First, and most importantly: it’s consensual. My husband and I have logged hundreds of hours of conversation on how to structure our dynamic, what we each hope to get out of it, how to make sure everything we do is physically and psychologically safe, and how to clearly communicate with each other. We talk on the regular about our dynamic and I have complete autonomy to discuss anything I need to address. While my husband holds the power and the authority in our relationship, he doesn’t want a submissive who won’t engage their critical thinking skills to enthusiastically consent to what we do or speak up when they have concerns.

Our daily life is pretty much like other couples’. We have laundry, bills, grocery shopping, family responsibilities, and myriad other things adults deal with every day. The main difference between us and a non-D/s household is that my husband is the ultimate authority in our home, and I defer to him when there’s a decision to be made.

That’s not to say he micromanages me. In fact, it’s quite the opposite. I run our home and make decisions about how that happens all day long. I’m responsible for making his lunches, doing our laundry, cooking dinners, and a million other things that give us the freedom to be together at the end of the day and enjoy the fruits of our D/s dynamic. I make sure his coffee and drinks are always filled, shine his shoes and boots, and do whatever else he asks of me. D/s has its place in our physical relationship as well and we regularly participate in BDSM activities that leave me black and blue under my clothes for days. On the other side of the coin, my husband decides what and when I shave, chooses the color of my nail polish, selects dinner from a menu of choices I give him, orders my food for me when we go out, and pretty much whatever strikes his fancy to do or make me do at any given time.

People unfamiliar with D/s dynamics may view our arrangement as misogynistic or downright abusive. I think it’s unbelievably fulfilling and so, so hot. Like, “the fire of a thousand suns” hot. Remember, all of this is consensual and that steers what we do right into alignment with feminism.

My submissiveness and feminism were at odds with each other for many years. How could I be a “real” feminist if I willingly let my husband order me around, flog me, tell me what a good submissive I am, and make me prepare dinner in heels and an apron if he feels like it? I mean, that’s the antithesis of what women’s rights activists fight for!

But, see, it isn’t. Feminism hinges on freedom of choice. Some women prefer to wear make up, and some don’t. Neither situation is wrong as long as a woman has the freedom to choose her preference and isn’t held back by societal expectations to conform to conventional beauty. Likewise, deciding to be unconditionally submissive to her partner doesn’t diminish a woman’s feminist values. It’s all about the freedom to live the life we choose for ourselves—one of the primary goals of feminism.

People will debate until the end of time about what makes a person become interested in BDSM or D/s dynamics, but the bottom line is that those interests do exist. It’s wonderfully liberating to safely tap into a darker side of myself and build my self confidence as a secure feminist woman. Indulging my submissiveness allows me to learn where my limits are and explore new experiences. Women don’t unilaterally have that option in our daily lives, since we’re often expected to satisfy expectations of what society tells us we should want, like, and do. I don’t feel subjugated or repressed as a submissive—I feel empowered.

I’m not going to lie: being submissive isn’t always a picnic. I’ve been involved in BDSM and D/s for longer than I’ve been with my husband and have experienced all manner of interactions, dynamics, and relationships with people in the kink community. They run the gamut from those who understand you can be both a submissive and a feminist to people who see submissives as easy prey. As with any group that gathers around a common set of interests, there are always outliers with agendas that aren’t altogether congruent with the larger community. Some people connect with the kink community believing that submissives are doormats with no sense of self worth who can be “trained” (read: bullied) into robotically performing like their version of the perfect woman.

It’s a challenge for outspoken feminist submissive women to call out men in the kink community who display misogynistic behavior. We’re often told “real submissives” shouldn’t challenge the men around them or that we are embarrassing our Dominants and should set a better example. These attempts to undercut qualities inherent to submissiveness are default responses from people who don’t want to hear that their misogyny is unwelcome.

I organize a regular community event in my area and meet women all the time who are newly learning and exploring their submissive side. The potential for being taken advantage of has always been high, but it has skyrocketed since the election season began. The subdued creepy behavior of men looking for an easy lay has been replaced by outright anger when they come to my events and discover it’s not a buffet of submissives hoping they’ll be taken home like an adopted puppy.

It takes finesse to figure out which people sincerely value submissives as as an equal part of the kink community and those who are threatened by submissiveness or feminism—or both. The truth is, it’s hard to do and I haven’t found a foolproof formula yet.

I’m a big proponent of attending as many get-togethers (“munches” in kink parlance) as you can. Meetups are usually held in restaurants or other casual settings and the objective is to simply get to know each other as people, not in the context of the kinky roles they identify with. When you strip away labels like “Dominant” or “submissive,” a munch is much like any other group of adults socializing over dinner or drinks.

If you’re trying to gauge the personality of a Dominant you’ve met, keep three things in mind:

Discovering you have submissive tendencies can be unsettling, especially if you identify as a feminist. It may take some soul-searching, but I’m happy to say that it’s entirely possible to combine these two aspects of your personality into one big, exhilarating package that fits like a warm blanket.