Why Are Grapes Trending and What Does It Have to Do With Final Fantasy XIV?

A grape loss to the community at large. 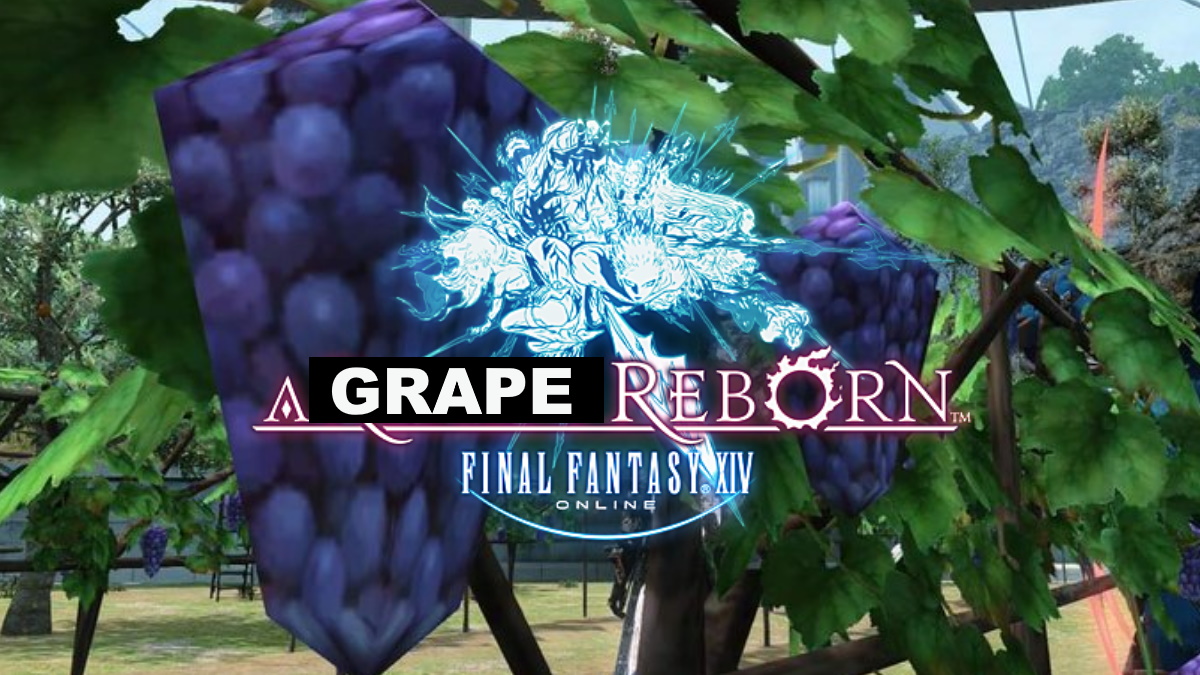 You may have noticed that the word “grape” has been trending on Twitter. If you’re like me you assumed that it was, perhaps, some sort of Christmas recipe gone wrong or a debate as to why Cherry Kool-Aid is called “Red Kool-Aid” but Grape Kool-Aid isn’t called “Purple Kool-Aid” and, instead, retains its name.

Thanks to the fine folks over at PC Gamer, the fruit-flavored mystery has been solved.

They fixed the grapes in Final Fantasy XIV.

Now I haven’t played Final Fantasy 14 (or Final Fantasy XIV for the folks who use the Roman numerals) because I know my ass would get completely sucked into an MMORPG and I only have so much time for video games (and that time is currently being occupied by Animal Crossing, Hades, and, this weekend, Death’s Door and Unpacking) so I read that snippet and said to myself, “The… goddamn grapes?”

According to Taylor, there’s a place called Labyrinthos players can visit thanks to the new expansion. There, you are greeted with the sight of what the locals are calling “grapes.” I’ve put “grapes” in air quotes because they look like a juice box you stick a straw into rather than something you eat.

The sheer a u d a c i t y of this model of grapes in Endwalker. #FFXIV #ffxivendwalker #ffxivmemes pic.twitter.com/nReeFoScwT

Believe it or not, this sparked a conversation about how hard it is to render things like grapes, peanuts, and other background objects. According to PC Gamer’s Tyler Colp, game developers chimed in on Grapegate 2021.

Naughty Dog principle designer Michael Barclay wrote about a bowl of peanuts in a Star Wars game that reduced the frame rate by five for each rendered nut. Another user pointed out classic shooter Daikatana’s ridiculously large (for the time) arrow texture of 1300 pixels that probably didn’t help the game’s performance. And Final Fantasy 14’s original 1.0 version had flowerpots that had as many polygons and shader code attached to them as player models.

Square Enix likely has to make similar considerations when adding a new zone to its already massive game: When optimizing a big game for a range of hardware, it makes sense to downscale the detail on a bundle of grapes that you’re never meant to look closely at anyway. Most of the reactions to the grapes were understanding that this is an unimportant part of the Final Fantasy 14: Endwalker experience.

Huh. I had no idea, but yeah, these background objects can really make game development a pain in the ass.

On a Star Wars game I worked on there was a bowl of peanuts in the Mos Eisley Cantina that reduced the frame rate by 5 whenever they were rendered because each nut was modelled individually.

Give me the grape baubles. https://t.co/sVaKH8olFq

According to Colp, the community wasn’t all that mad about it. They are just grapes. At most, the sharply edged fruit pouches were turned into memes and folks went about their Endwalker business.

Those grape days are now gone, apparently, because the patch has fixed the issue.

The community has lost one of the good ones today

Taylor writes, “It seems all the memes and tweets were enough to bring the grapes to Square Enix’s attention though, as the new patch has made them considerably less chunky. They’re not quite at the levels of detail as the infamous 1.0 flower pot, but the sight of them isn’t as jarring anymore. The patch notes are bold enough to call the low-poly grapes an issue, claiming they ‘were reduced in excess to alleviate system memory usage in the area,’ but I think there’s a good chance they wouldn’t have changed had their presence not quickly become a joke amongst the community.”

First, I had to look up the “infamous 1.0 flower pot” to find out that the original version of FFXIV (the one panned by critiques back in 2010) had spent so much effort rendering the flower pots that it affected the game. There were, of course, other issues, but I’m not exaggerating when I say that the game director himself, Naoki Yoshida, said that flower pots were a big problem for the game.

The Gamer’s Scott Baird writes, “According to Yoshida, the original flowerpots of Eorzea used around one thousand polygons and one hundred and fifty lines of shader code, which is roughly the same amount that is used for player characters. The fact that such taxing graphical elements existed meant that Final Fantasy XIV could only depict around twenty players on the screen at any one time, which limited the game’s appeal as an MMO.”

Back to the grapes, though. While Square Enix does give a technical explanation behind the patch, I do kinda think that it was because their feelings were a teeny bit hurt about the memes.

I mean, it could very well be technical, but it’s more fun to think that someone decided to take the grapes from “jagged” to “friend-shaped” because someone made a meme. In exchange, however, they get to watch the community coming together to mourn the loss of some low-poly purple blobs.

God, I love fandom so much, y’all.

remember us… remember that we once lived pic.twitter.com/TIEt3UVMgX

The grapes were gonna be mocked no matter what, the fix just adds more fuel to the fire.

If you or someone you know is suffering from the loss, remember: you are not alone.

Oh, I should mention that the grapes aren’t the only thing the patch fixed. There are actually gameplay-related fixes that were made, it’s just that, you know, GRAPES.