Feminism Around the World: Canada Chooses Black Rights Activist As First Woman On Their $10 Bill 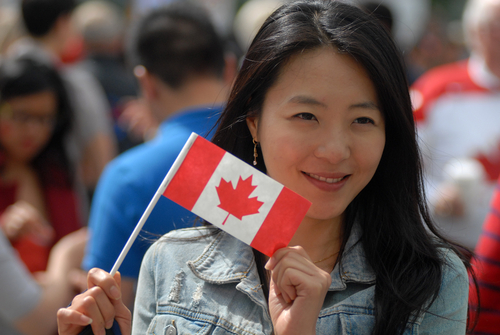 Feminism Around the World: Canada Chooses Viola Desmond As First Woman On Their $10 Bill

Canada’s Finance Minister Bill Morneau and Bank of Canada governor Stephen Poloz announced today that Viola Desmond, black rights activist known by some as “Canada’s Rosa Parks” (even though her civil disobedience happened nine years before Parks’ action in the U.S.), will be the first Canadian woman on their $10 bill!

Above, you can watch a video from the Historica Canada series, Heritage Minutes, in which they talk about the fateful day — November 8, 1946 — when 32-year-old Desmond decided to see a movie at the Roseland Theater in Nova Scotia while her car was being fixed. She was a beautician and a business woman, and so could afford the luxury of paying a bit more to sit in the orchestra section of the movie house, rather than in the balcony.

However, that movie theater was segregated, and she was denied a ticket for the downstairs area of the theater. When she sat there anyway, she was arrested on the charge of not paying a one-cent tax (the difference in price between theater sections), despite the fact that she’d originally wanted to pay it in the first place. She was eventually released after paying $20 bail and $6 in court costs. While she attempted to appeal her conviction, she lost.

Yet that small action, the first known legal action against segregation in Canada, was the catalyst for a larger civil rights movement in the country. She never had her conviction overturned in her lifetime, but as reported by CBCNews, “She was granted a free pardon posthumously in 2010 by former Nova Scotia lieutenant-governor Mayann Francis, the first black person to serve as the Queen’s representative in the province. The provincial government also issued a formal apology.”

The nation continues to try to make it up to her and her family by selecting Desmond, first from a pool of 460 names selected by Canadians, then twelve names, then a short-list of five, for this honor.

The Queen of England, currently the only other woman who consistently appears on Canada’s currency, appears on the front of Canadian $20 bills. While Desmond is the first woman to appear on the back of the $10, there have been other women, notably Thérèse Casgrain and a group of women who fought for women’s rights in Canada called The Famous Five — Louise Crummy McKinney, Irene Marryat Parlby, Nellie Mooney McClung, Henrietta Muir Edwards and Emily Murphy — who were on the back of the $50 bill between 2004 and 2012. Curiously, there only seems to be room for one woman on the back of a bill at any one time.

When a student asked Morneau why more than one woman can’t be on the back of a bill at a time, he replied by saying that “it was important to pick just one single woman so their story will be remembered, and serve as an inspiration to all.” So… are all the dudes on the other bills not being remembered well, because we can’t focus on any one in particular? Because there are just so many? *sigh*

However, this is still a huge honor to Desmond’s family. Her younger sister Wanda Robson, now 89, said that “It’s a big day for a woman to be on a banknote. It’s a really big day to have my big sister on a banknote.” She went on to refer to her sister as “passionate,” an inspiration to people, and that “She was elegant, with perfect manners and she treated everyone with respect.”

Even though she became an activist almost a decade before Rosa Parks, her story is much less well-known worldwide, and has only begun to pick up steam in Canada itself in the past 10-15 years. Here’s to Canada’s $10 bill reminding people of her fearlessness and of her story.

UNITED KINGDOM: “The Guardian view on police abuse of women: an offence against society” (The Guardian, 12/8/16)