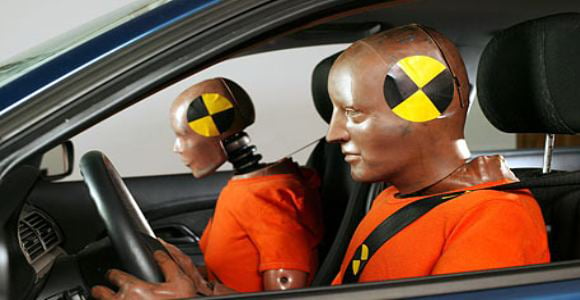 When you read up on a car’s safety rating, you’d assume the tests they used to determine them included men, women, and children crash dummies, right? Apparently not! Hit the jump to find out what happened to safety ratings when car companies put a female crash dummy in the front seat.

The Washington Post has a story about Beth Milito, who purchased a 2011 Toyota Sienna minivan based on recommendations from friends as well as the vehicles four-star safety rating. “But tucked into the details of the government’s crash test results was another rating that Milito said she never saw, which now has her wondering about her own safety,” writes the Post. “The front passenger seat on Milito’s Sienna received two out of five stars on the frontal crash test, a fall from the top five-star rating for that seat on the Sienna’s 2010 and older models.”

Why did it get a lower rating? “Starting with 2011 models, the federal government replaced an average-size male dummy with a smaller female dummy for some tests. When the 2011 Sienna was slammed into a barrier at 35 mph, the female dummy in the front passenger seat registered a 20 to 40 percent risk of being killed or seriously injured, according to the test data.” And they don’t know the numbers for women in the driver’s seat because they never sat a female dummy there.

“When we’re out and about as a family, I’m the one sitting in that seat,” said Milito.

“Consumer advocates say the female dummy’s subpar performance in some top-selling vehicles reveals a need to better study women and smaller people in collisions. Until recently, only male dummies were used during more than three decades of government testing aimed at helping car buyers choose between vehicles,” writes the Post who also added that a female dummy can serve to mimic a 12-year-old child, who could also potentially be sitting in the front seat.

“Auto safety watchdog groups say they’ve been pushing NHTSA [National Highway Traffic Safety Administration] to go beyond the average-sized male dummy since the agency launched the star-rating system in 1978. They say those tests should take into account not only women but the increasing elderly and obese populations and larger children who have outgrown child safety seats,” according to the Post. “The tests, they say, also miss average women who fall between the 50th percentile male dummy, which stands 5-feet-9 and 172 pounds, and the unusually petite female dummy, which is 4-feet-11 and 108 pounds.”

Saying I’m concerned is actually putting it lightly, I’m a woman with a rather small frame. I’m shocked to find out safety measures don’t account for people like me. That seems rather negligent, no? What are your thoughts?