Fear the Walking Dead Recap: Episode 2, “So Close Yet So Far” 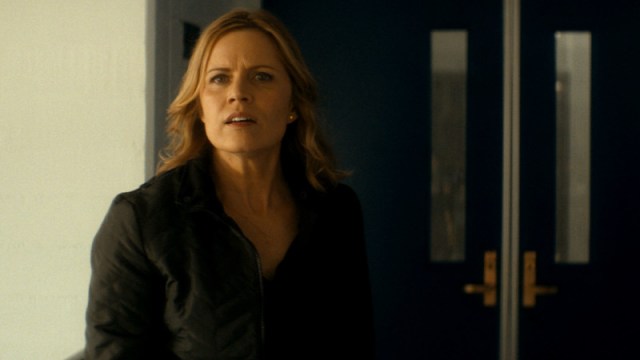 Fear the Walking Dead is off and running. If you aren’t caught up on the show, read on at your own risk—spoilers ahead!

Last week’s episode kicked off AMC’s newest zombie drama with a bit of a rocky start. The show was filled with tons of kinetic zombie energy, but none of it ever actually bubbled to the surface. We started and ended the show with some dramatic zombie action, but the rest of it was a lot of family drama. There’s nothing wrong with a show all about family drama, but we need to see some undead action here! I was really hopeful that the second episode of the show would kick things up a notch, and we’d see that same Kirkman magic that we’ve all come to love from The Walking Dead.

And … it sort of happened.

After last week’s episode where Maddie, Travis, and Nick witnessed and interacted with their first walker (second walker for Nick, of course), they were understandably shaken. They respond by rushing home to move the family out to the desert to “ride out” whatever the hell is happening in L.A.

Here’s my first problem: Sure, we get that there is clearly something rotten in Denmark. The rampant sickness, the crazy strong undead-looking creatures, the traffic jams, the increased violence, the death. But I want you to put yourself in their place. You’re not watching a show that you know will end in a zombie takeover. You’re just living your actual life. Would those events be enough to take your entire family and move into the actual desert? They don’t say, “oh, let’s go stay at this posh resort,” or “I have a cabin in the desert, we can hang there.” No. They just generally talk about going “to the desert.” Yet, later on in the episode, when Maddie is presented with an opportunity to stock up on canned goods, she refuses. When Travis is presented with a cop hoarding water, he just moves on and doesn’t buy himself a single bottle. Yet they think they’ll be safer somewhere “in the desert”? These do not strike me as the folk who would last 5 hours in the desert. But let’s move on …

Maddie learns that Alicia is hanging out with her super sick boyfriend, Matt—who is not yet a walker like I thought last week, but he’s pretty dang close. Maddie, believing the sickness and whatever was ailing walker-Cal are linked, yanks Alicia away from her boyfriend (who is sporting a gnarly bite on his shoulder … #RIPMatt). Alicia is sent home where she has to care for the now-detoxing Nick, Travis goes to collect his ex-wife and son, and Maddie goes to grab some drugs to help ease her son’s pain as he detoxes.

Travis’ son finds himself in the midst of a riot after the police shot an unarmed homeless man “like twenty times.” We never find out if he was actually a walker, but all clues point to it. Of course, the citizens don’t know this and begin to protest, crediting the shooting to yet another form of unchecked police brutality (no one notices the hippie walker woman that shambles onto the scene who is also struck down). As tensions rise, an all out riot ensues, and the police bring out tear gas and riot shields. Travis gathers his family, and they take shelter in a nearby barber shop.

Over at the school, Madison is raiding the place for any drugs she can find to help her son detox. As she’s squirreling away drugs, she runs into the creepy student from last week, Tobias. Tobias asks for his confiscated knife back and proceeds to speak incredibly intelligently and lucidly about the entire zombie apocalypse. He had such an intense knowledge of what was happening in the world and what would go down as if he’s been studying The Walking Dead graphic novels. Tobias grabs his knife, stocks up on canned food (which Madison refuses), and they start to head out of the school—until they’re confronted by the walker version of the principal, who Madison kills with a fire extinguisher.

This was my other issue: what the actual heck is happening? While I get that they’re trying to show us the slow burn of society breaking down, the tempo of this social breakdown feels like a jumpy, jolting ride. We ended last week with a crazy interaction with a walker, and then we had to believe that a single interaction paired with sketchy news reports was enough to make a family bug out to the wilderness. We’d amp up with the riots downtown, and then we’d talk to the neighbors about their failed birthday party. A walker would shamble onto protest grounds, and then we’d get to watch Maddie walk around the deserted school with Tobias. This doesn’t feel like a slow burn. It feels like a car ride with someone learning to drive a stick.

I think part of what makes it feel so disjointed is that no one is talking about what’s happening—no one but Tobias, anyway. Travis just expected his ex-wife to be super cool with him descending on their house, grabbing her and their son, and running off on some ill-formed plan to live in “the desert.” Maddie expects her daughter to leave her very ill boyfriend alone and ignore the cries of their neighbor mid-walker attack simply because Maddie “says so.” If we’re supposed to see society breaking down slowly, I want to see more than one family reacting strongly to one experience, however frightening, dangerous, and generally unsettling it may have been. The episode’s story just felt shaky, and the more I thought about the events, the more confused I became as I tried to understand the motives behind characters’ actions.

However, I can’t say that I completely hated the episode. I certainly enjoyed it more than the series premiere, and there was a lot more action than the premiere. While the pacing made it tough to follow the story if you thought about it too hard, I couldn’t help wondering if the jumpy pacing was an intentional plot device. When crisis strikes, the news that comes from the crisis is often unclear and disjointed. We aren’t always certain that the government is telling us the whole story. There are always some people who escalate the situation too quickly, people who panic before they need to, and people who completely blow off any and all precautions given—all characters we saw in the second episode. So while I wasn’t in love with this episode, it was far better than the pilot, which gives me hope for the future

Fear the Walking Dead has a much harder job than The Walking Dead. It has to bring us that zombie suspense without really actually showing us many zombies. It’s telling us a story whose ending we already know and still manage to keep our interest. So, I’m not surprised the show has had a bit of a rocky start; I’m just not sure if they’ll meet the standards set by The Walking Dead.

What did you think of “So Close Yet So Far”? Do you think the show is getting better, or do you think it’s bound to be a failed spin-off? Let me know what you think in the comments!