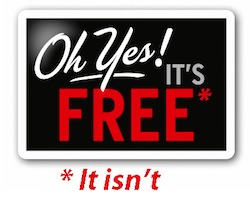 The Federal Communications Commission has denied a plan which would’ve brought free wireless broadband to the entire nation. In related news: :(.

Four years after a company named M2Z Networks proposed a plan to bring free wireless broadband access to the entire nation, the FCC shot it down. Considering the FCC spent about four years sprucing the plan up to their standards, people are wondering exactly why they’d go through all that trouble and then shoot it down. Some speculate that the plan directly conflicts with the FCC’s own National Broadband Plan, while others assume that M2Z’s plan would make wireless providers very unhappy.

“We gave careful and thorough consideration to the proposal, but ultimately determined that this was not the best policy outcome,” Ruth Milkman, chief of the FCC’s Wireless Bureau told us. “We remain vigilant in our efforts to facilitate the universal deployment and adoption of broadband, especially through the much-needed reform to the Universal Service Fund.”