The Mary Sue’s Favorite Comments of the Week: A Captain For All Seasons 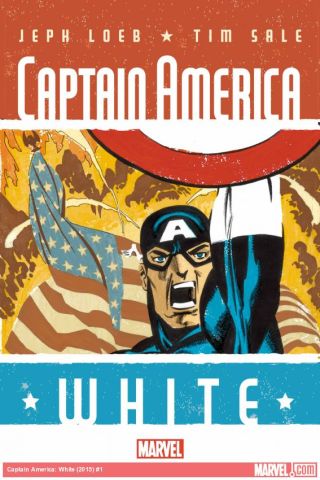 This week on The Mary Sue, we talked about how many different varietals of Captain America we’re lucky to have, Funko butts (yeah, really), female Thors and hammers, and squee Valhalla.

When we reported that Marvel was finally releasing a Captain America: White, the pun squad came out in force. 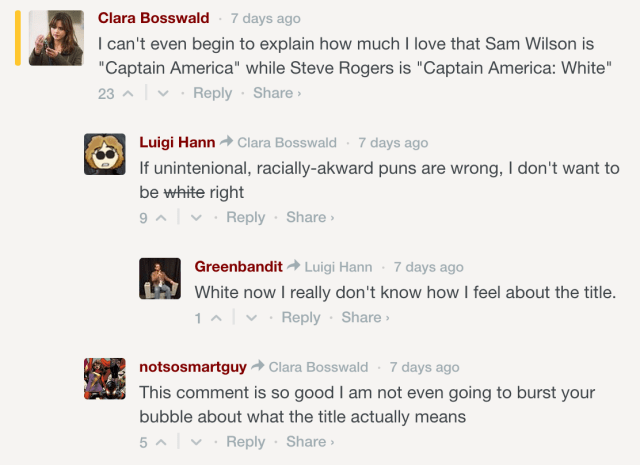 Then, we took a not-so-sharp right turn when on our story about Funko Pop!’s new Orphan Black figure, Felix.

From Steve Rogers to butts. That’s how this week is going, y’all. And then, dinosaurs. Lady dinosaurs. Wielding Mew-mew–… er, Mjolnir in our story about Marvel’s classy congratulations to Jurassic World nailing the #1 box office opening weekend of all time. OF ALL TIME.

Then, on our story about the Mad Max: Fury Road stunt doubles getting married, we saw the pun squad make its fierce return. 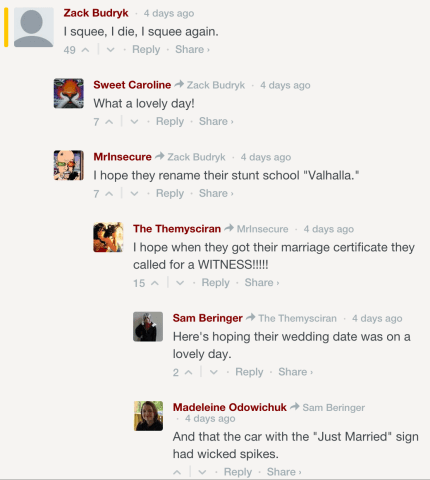 Also for some reason, any time we brought up Jessica Chastain or Bryce Dallas Howard at all, y’all were on top of it with some interesting jokes. What’s that about?

Either way, these comments on the same story from Facebook. I love them. ANOTHER.

From all of us here, have a good weekend folks! And let’s get someone in here to clean up all this chrome paint, broken mug debris, and d’aws. Thanks.