Dr. Fauci Threw the Ceremonial Pitch for Baseball’s Opening Day & It Was Perfect (For Him) 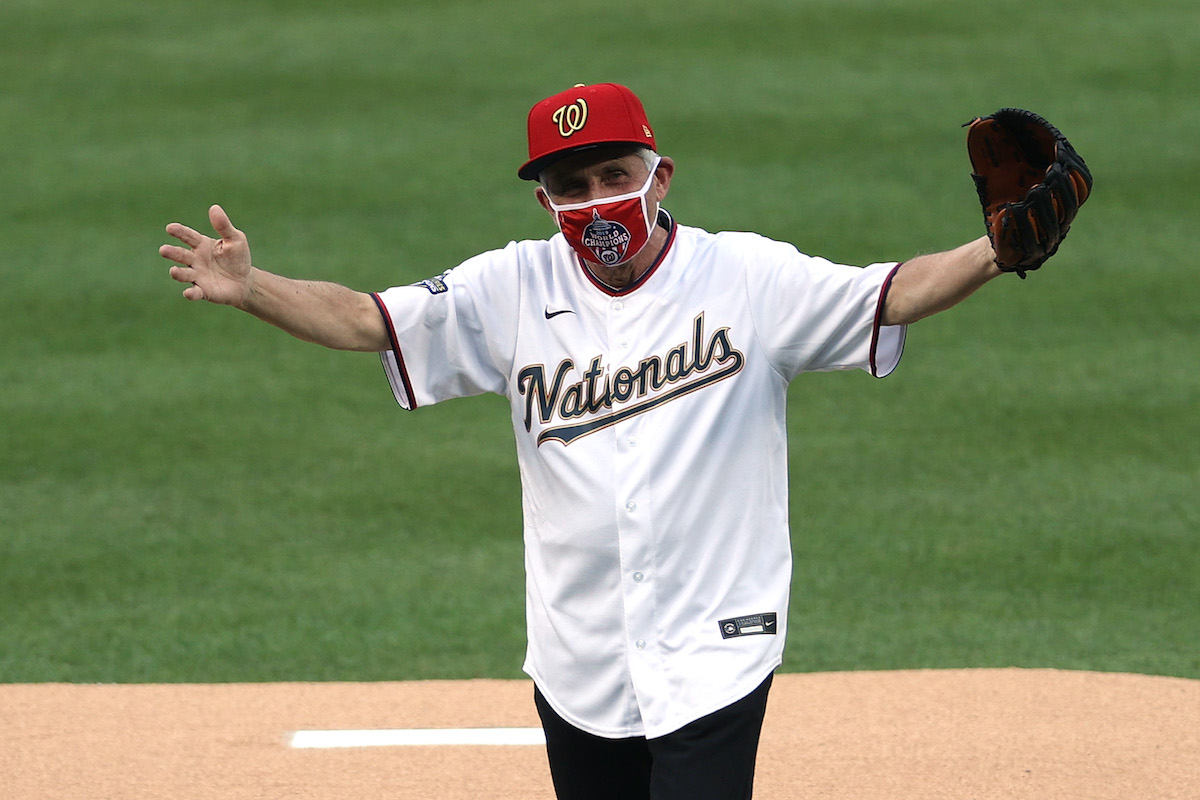 Yesterday was the opening day of the new Major League Baseball season and Dr. Anthony Fauci was invited to throw the first pitch ahead of the Yankees vs. Nationals game. Fauci is a vocal fan of the Washington Nationals, even wearing a Nats-themed face mask to testify in a congressional hearing last month.

Fauci definitely deserves this—he deserves a quick break from his packed schedule of heading the coronavirus response for an entire country, fighting with Donald Trump, and apparently, as he’s now revealed, fielding death threats through all of it.

On the #AxeFiles, the usually unflappable Dr. Fauci opened up about the torrent of abuse and threats he and his family have endured since he became the most public advocate for the sacrifices necessary to curb COVID-19.
Listen to the full pod👉https://t.co/NuV5yEEPB6 pic.twitter.com/lIdAmTiL7q

Before the game, which was played for stands full of cardboard fans only, every player on both teams knelt during the National Anthem in solidarity with the Black Lives Matter movement. Between that and giving Fauci the honor of throwing the ceremonial pitch, I imagine Donald Trump probably spent the evening fuming. (Good.)

Players for both the New York Yankees and Washington Nationals took a knee in solidarity with the Black Lives Matter movement ahead of baseball’s opening night on Thursday. pic.twitter.com/19qKIiXsB4

.@Kaepernick7, this is all you. Well done. https://t.co/8uOqaLXTuy

The ceremonial pitch before opening day or a World Series game is not traditionally thrown by an athlete. Often, the sitting president gets that honor (Trump never has, though, making him the first President in more than a century not to throw an opening pitch at an MLB game) and the result usually highlights just how (often charmingly or hilariously) unathletic that person is.

Fauci was no exception.

Dr. Anthony Fauci threw out the first pitch before the Nationals-Yankees game. pic.twitter.com/04Tbkh7Voa

Did that pitch make it over or even in the direction of home plate? No. Does that matter? No!

As that ESPN commentator says in the clip above, Fauci has “been so busy, that is probably not something he’s had to practice.” Honestly, if he had thrown a perfect (or even decent) pitch, it would have been weird! He’s 79 years old and he’s dedicated his life to protecting us from infectious diseases. When would he have had time to practice his pitching?

Anthony Fauci being bad at sports makes me trust his science more https://t.co/u21qYnpzWX

I love that Fauci took the opportunity to do this really exciting thing, even though he must have known how it would go. The lesson he’s teaching us all: Take chances! Don’t be afraid to fail! Wear a mask!

In Dr Fauci’s defense, he’s spent his whole life making sure no one catches anything. #FauciFirstPitch