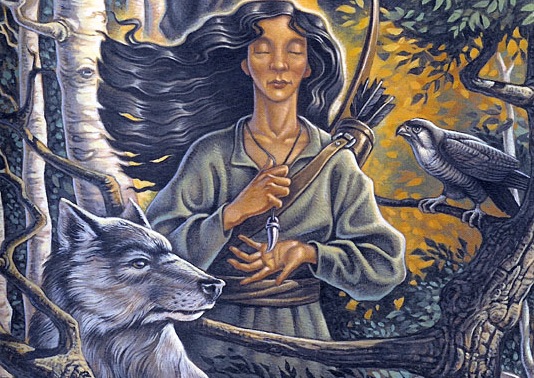 Tamora Pierce’s feminist fantasy shoots love and empowerment straight into the hearts and minds of her readers. I love all of her books, but Song of the Lioness, The Immortals, and Protector of the Small quartets are particularly special to me; after all, I’ve been reading them since I was 10 (and re-reading, and re-reading). Pierce’s stories usually star young women coming into their powers, both in terms of their magical abilities and their powerful selves. Characters like Alanna, Keladry, and Daine all kick butt and learn their worth. I grew up with ideas of my own heroism because of them. All truly amazing characters that I recently shoved at my 13-year-old sister with absolutely too much enthusiasm to seem cool.

But as deft as she is at crafting her heroines, Pierce makes a point of including supporting, feminist, male characters in her stories as well—characters that I honestly have a crush on even now, post-feminist awakening. For Alanna, it’s George and Jonathan; for Kel, it’s Cleon and Neal; and for Daine, it’s the dashing, sensitive Numair Salmalín. Daine and Numair are a pair of the most powerful mages in Pierce’s fantasy world. They’re both shapeshifters, in tune with nature, hilarious and temperamental. In their series, The Immortals, their relationship comes about almost in spite of themselves. They survive wars and intense family drama (like, Greek gods-level family drama), and come out the other side together. The Immortals series ends, and they begin a more peaceful existence at the palace in Tortall. In subsequent books, we get a peek at both of them, and we know they’re happy and have two magical children. It’s a thrilling love story that doesn’t play one character’s role down in favor of the other, but instead casts them as equal partners even after their adventures are done. What could be more feminist than that?

In The Immortals, we get to see Daine’s magical origin story, but Numair’s isn’t as clear. He’s not the star of the series, and though we know some details, I’ve always wanted more from Numair. (Admittedly, I want more of pretty much all Tamora Pierce characters.) And now, Pierce is delivering.

Recently, via Reddit, Queen Pierce informed the world that she has finished The Gift of Power, the first novel in in the Exile Trilogy, which chronicles Numair’s younger years. It’s expected from Random House in spring 2017. Goodreads provides an official summary: “In which we learn of Numair’s last years at the University of Carthak, the beginning of his conflict with the newly-made Emperor Ozorne (Numair’s best friend), his quick departure from Carthak, and how he survives afterward.” I was in the grocery store when I heard this news, and I promptly burst into tears in the pasta section.

So what can we expect to find out in The Gift of Power? I sure know what I want. What was Numair’s training really like? What was he like as a young person? What are the details of his Dumbledore/Grindelwald-esque relationship with Ozorne (whom Daine almost eats in hyena form during The Immortals)? What were Numair’s motivations for escaping? What was he doing in his first years in hiding as a fugitive spy? When did he decide to change his name from Arram Draper to Numair Salmalin?? I HAVE SO MANY QUESTIONS.

In The Immortals, Numair is Daine’s mentor, teaching her how to wield her incredible powers. In The Gift Of Power, I think we’ll probably see his mentor Lindhall Reed, whom we meet later in The Immortals. Even more exciting, we’ll probably get to see the dynamic between Numair and Ozorne as Reed’s pupils—and when Ozorne turns on Numair, how does Reed help him survive?

I’m down with any book that takes me back to Pierce’s world, but I’m even more thrilled that she’s returning to this specific character. It never felt to me like we were done with Numair, and I’m so glad to know that Pierce feels the same way. But most importantly, I’m thrilled that one of fantasy’s most feminist-minded male characters is back to show the rest of the pack how it’s done.