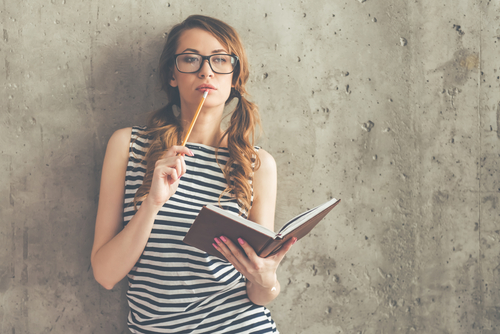 Most of the time, when I’m in a state of grief, I change my hair. When I ended a long-term relationship, I chopped my near waist-length hair into a pixie. So now, two days after the election, I was going red.

As I sat quietly in the chair, streaks of violent ombré settling into my scalp, I overheard the man and woman next to me at the salon talking about the election. In particular, they were talking about the hypocrisy they saw with women who were offended by President Elect Trump’s “grab them by the pussy” remarks. “I bet those women read Fifty Shades of Grey and didn’t bat an eye!” the woman sneered, and the man joined her in bitter-tea laughter.

I sat frozen, unable to react with a head full of dye. But the first thing I did was text three friends.

These friends, women I’ve known for over a decade, are part of a group of writers known to the internet and sometimes reviled by people who don’t understand. They are fanfiction writers. As am I.

Now, I’m not talking the kind of fan fiction that’s filled with heart eyes and kissy emojis. I’m talking the type of fan fiction that would make our mothers flip if they knew. The type of fanfiction we enjoy runs the gamut from the most innocent to the most dark and profane. You name it, I’ve read a fic that dealt with it. And I probably can justify nearly any kink imaginable, provided it’s well written.

I texted these women (all in their 30s, living on their own or with partners, some with children) because it made total sense to get feedback from a fanfiction author; Fifty Shades of Grey famously started as Twilight fanfiction. I wanted to discuss fan fiction, sex, and feminism with the women I knew understood my points best.

I’ve been writing fanfiction since the tender age of 14, although I didn’t venture into explicit content until I was of legal age. While most of my early work is histrionic and embarrassing, writing fan fiction helped me become a better writer and a more sexually realized woman. I’m unafraid to admit I still read and write fanfiction with gusto. And I stumbled into it completely by accident, much like some of my friends.

“My first encounter with fanfiction came in my early teens, searching the net for Sailor Moon things,” recalled Jennifer, 31, from Canada. “I stumbled upon what was then called ‘lemon’ fiction,” what we would now consider to be explicit content.

As the women and I talked, I began to recognize this wasn’t just my own liberation. There is a safe space that our particular group of fandom provides for autonomy and feminism through an exploration of kink and sensuality, dominated by the written word.

“I think it’s that exploration that makes fic an empowering thing, especially given the fact that it’s a medium dominated by women,” added Carmen, 31, from Connecticut. “It gives women a safe space to explore different kinks and see what turns you on. Like trying on a dress before you buy it.” She’s quick to note that this isn’t a foolproof technique: “Sometimes something can be appealing in fiction, but not something you necessarily want to do yourself. And if there isn’t any underlying emotion, I’m less likely to get into it.”

This experimentation in the written word gave these women a confidence to take their fantasies off the page. Danielle, 33, from Indiana said, “Writing fanfic and reading fanfic by other female authors had such a hand in my perceptions of what a sexual encounter could be. I can’t even imagine walking into my first sexual experience without that foundation behind me. It would’ve been like a Regency novel, blushing and waiting for the man to come in. Like, please, I’ve already written this six different ways!”

Jennifer agreed. “Exchanging ideas with other women (for fic, roleplaying, or just because we wanted to share with one another) helped me to realize what I wanted sex to be like for me. The things that I wanted and liked weren’t so strange; they just weren’t showcased in the type of media that most people consume. If anything, reading fan fiction made me more confident in the bedroom.”

The reason Donald Trump’s comments offended me, and all three of my fanfiction-loving friends, wasn’t because of the language used. I’ve used worse. Written worse. Discussed worse. The language of “grab them by the pussy” is the language of assault. Of taking something without consent. Fanfiction, at least the kind I most enjoy, pushes the boundaries of what the body is capable of, but it does so in a way that is never less than enthusiastically consensual.

If I had been able to find my voice that day in the salon, I would have told that woman that the problem isn’t in the “pussy.” The problem is the culture of violence that surrounds it.