This whole day has been really weird.

We tend not to follow cosplay and convention harassment as often as our sister site, The Mary Sue, does. That doesn’t mean we aren’t interested in seeing convention leaders step up against harassment, of course, so we’ve been following The Mary Sue’s recent exposé on Fan Expo Canada pretty closely. Today, the whole thing just got really weird.

For those of you who aren’t in the know, The Mary Sue’s Jill Pantozzi was made aware of a promotional e-mail for Fan Expo Canada’s Toronto ComiCon last week, which unhelpfully suggests that convention-goers keep warm by “cuddling a cosplayer.” 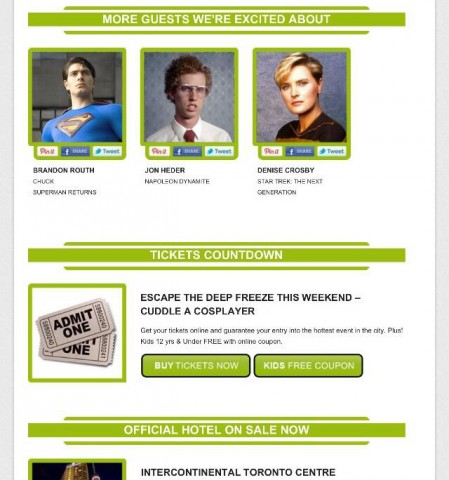 So what’s the big deal? Cosplayers are constantly getting groped and touch without their consent by other con-goers. It’s kind of a big problem in the Geek community, and one that’s been getting a lot of attention lately now that more cosplayers are willing to step forward with their own experiences. In light of this, many convention attendees, cosplay advocates, and members of the press — ourselves included — thought the e-mail was in incredibly poor taste.

After reaching out to Fan Expo Canada and being informed that the company would not retract their e-mail or offer any sort of apology, Pantozzi wrote an article about the controversy over at The Mary Sue, which is obviously a lot more thorough than the summary we’ve just laid out. In the meantime, Toronto ComiCon went off this past weekend without much of a hitch. Our wonderful weekend editor, Sam Maggs, happened to be in attendance and covered a lot of great cosplay that she saw. That will become important in a couple of minutes.

Today, Fan Expo communications director Shelley Mantei released a statement on the Toronto ComiCon Facebook page to address recent safety concerns that had cropped up in the lead-up to the event. It was… less than professional, in our opinion. From the statement:

Fan Expo has a great history of ensuring fans’ safety, so on behalf of my team we quickly responded to last week’s enquiries on our cosplay position. Unfortunately this was in the final days surrounding our March show so expressed to a journalist that officially addressing concerns in time for their deadline would be a hasty response and wouldn’t be giving an important issue due attention. As an act of faith we did escalate rolling out the policy we’d been working with it’s unfair to say we “hadn’t got around to it” when it’s an important policy and any legal document will move slowly. http://www.comicontoronto.com/faq/

Instead of seeing our genuine interest to respond after the show what resulted was an inflammatory style of story that most alarmingly included false statements. Inflammatory journalism can incite irresponsible companies to respond, but when that’s not the case it can instead hinder a company from working with the community. So rather that respond further to that journalist we prefer to find a journalist or group in Canada who knows our shows and track record (and ideally has been to our show more recent than 2008), and who’d work with us with the bigger picture in mind to rollout something for our August show in Toronto.

Much of our team are on a break from a very successful show weekend and on their return I will be trigger finding that person/group and determining what we can achieve together for all of our fans including the cosplay community.

In the comments of the post, Mantei also said this:

We want the article to be given credit for bringing forward some valid concerns, but it did so in an inflammatory and poorly paraphrased manner. This isn’t the ideal way to communicate with us (or anyone) so we flagged this in the hopes this style didn’t set precedent in our community. So instead of giving the article more ado we’d rather put our time and attention toward a long-term plan with our community’s assistance to help identify other journalists who are knowledgeable on this issue (not to write a counter story) or cosplay groups to work constructively with us. There are a few recommendations and offers started — please keep those coming!

Yikes. Anyway, as it turns out, they reached out to our own Sam Maggs (who also contributes to The Mary Sue, by the way) over Twitter to ask her for just that. Yeah, we told you that her being at Toronto ComicCon was going to be important.

.@FanExpoCanada …You know I write for @TheMarySue and with @JillPantozzi right? The very publication and journalist you’re calling out?

Guess not. But Sam got in touch with them anyway, and here’s what happened, in Sam’s own words (which we’ve italicized for clarity):

After reaching out to Shelley via Twitter, Facebook, and e-mail today, she called me to chat about what had been going on with the cosplay and harassment controversy over the course of the weekend. When I asked her to clarify her Facebook post, she assured me that they’re not looking for journalists to author a counter-story against TMS (though that’s the overwhelming impression that I got when I read that Facebook status).

Instead, Shelley said that she is looking to assemble a board or team of sorts that would oversee Fan Expo Canada’s cosplay and harassment regulations; she’s looking for journalists as well as cosplayers because she wants people who have researched and written at length about the subject, in order to bring their knowledge to the team. When I brought up the excellent ECCC “Cosplay is not Consent” artwork, she told me she’d love to do something like that for Fan Expo in August, and is looking into teaming up with cons like ECCC and the Calgary Expo to put out similar messaging. Shelley also said she’s considering running a contest where people could submit “Cosplay is not Consent” artwork to have it featured in Fan Expo’s marketing materials.

Because she was looking for my thoughts on the issue, I told Shelley that I didn’t understand why they didn’t immediately retract their “Cuddle a Cosplayer” statement and issue an apology — not only did it make people feel unsafe, it’s also becoming something of a PR disaster, so no one’s won. Shelley repeated that they’re a new team, and didn’t have the proper channels set up to deal with an issue like this quickly.  Being bought last summer by a large, global company has slowed their reaction time to things — and is also the reason their harassment policy was delayed (their new lawyers in the UK had to approve it first). While I understand bureaucracy and internal politics, I think that in cases like these — where people’s safety is on the line — it becomes a serious and potentially dangerous problem. I hope that, in the wake of this controversy, better procedures will be put in place for the future.

Shelley also said that their decision to not pull the “Cuddle a Cosplayer” messaging down right away is because they had to think about how certain marketing decisions might affect them in the future. Shelley mentioned that this particular scenario pitted “cosplayers versus comic book guys,” and that her team wanted a solution that would please everyone. She also told me that for every person who was offended by “Cuddle a Cosplayer,” she had someone tell her what fun ideas they have, and that their excellent record with con security made her feel safe to issue such marketing. I responded that the people who find that “fun” are the people that make me feel unsafe when I attend a convention, and that if safety is the number one priority, everyone can have a good time. Shelley was receptive to my feedback, and told me that this is the direction in which she wants to take the convention.

In regards to The Mary Sue article, Shelley said that her team will take a few days to decide whether or not to “deal with” Jill; if not, they will just focus on moving forward instead of playing “he said, she said.” Personally, I hope that Shelley and her team do reach out to Jill; it seemed overwhelmingly like Shelley’s issues with the piece had to do specifically with the quotes Jill received from cosplayers. Jill wasn’t intentionally attempting to be inflammatory with her piece; instead, she’s written something which has opened this (potentially extremely productive) dialogue with the Fan Expo team. So thanks, Jill. We heart you.

Because Fan Expo Canada is the only game in town (they run Canada’s largest convention), and because I want Canadian cosplayers to have the best, safest con experience possible, I’m going to be positive about the call, and take Shelley at her word. She repeated to me several times that this wasn’t just lip-service, and that she really does want to form a committee to create positive changes and a safe environment for cosplayers in the lead-up to Fan Expo in August. If a committee does come into being, I’m very much looking forward to being on it (because you guys all know I don’t hold my opinions back on things involving cosplayers and consent).
Still, I wish Shelley and her team would admit that the “Cuddle a Cosplayer” messaging was a mistake. It would only make the fans feel safer at this point — especially if Fan Expo really is so committed to making positive changes from here on out.