Jimmy Fallon Took Us Into Wanda’s World With FallonVision 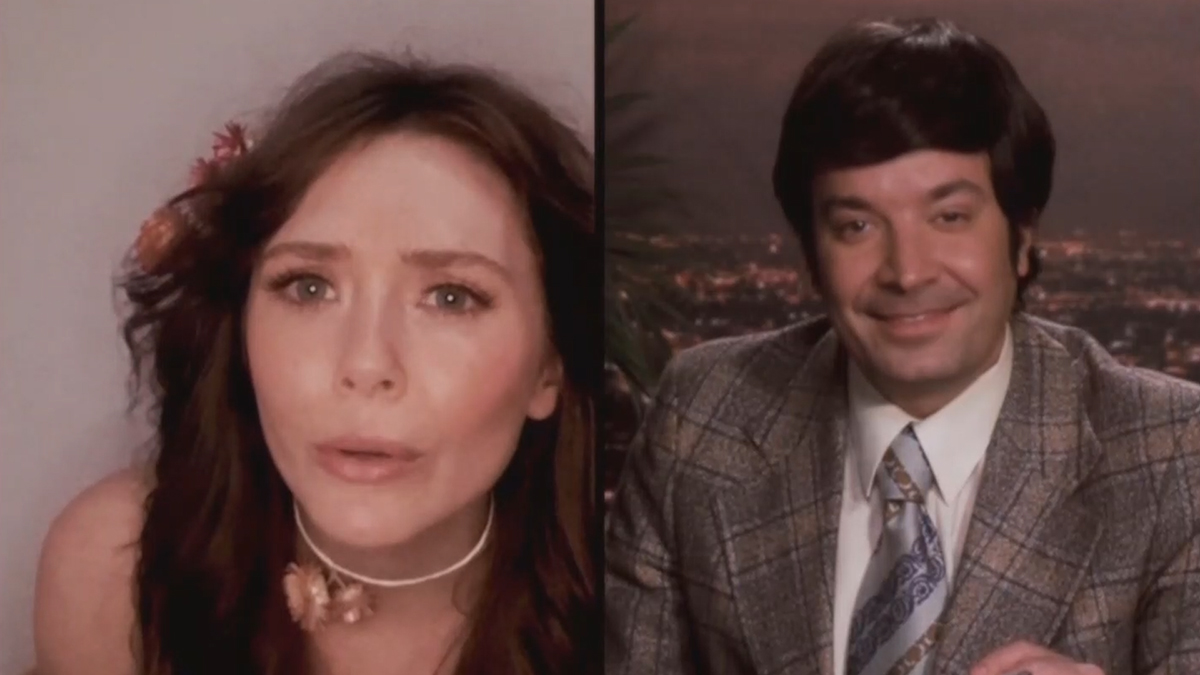 Elizabeth Olsen took to The Tonight Show Starring Jimmy Fallon to talk about the finale of Marvel’s WandaVision coming this Friday. In a fun introduction to the show (and Lizzie Olsen), Fallon took us through the decades of talk show hosts and their famous guests in a beautiful homage to the unique styling of WandaVision!

The sketch starts with Elizabeth Olsen as a movie star from the 1950s while Fallon was a Jack Paar-type host. With cheesy jokes and time-period appropriate looks, Olsen and Fallon take us on a journey through the past, from the ’50s into the Johnny Carson era and up through Fallon’s own show.

It’s a fun way of looking at WandaVision but also the history of talk shows! We’re so used to the modern shows we have today that I know I sometimes forget the energy that Jack Paar and Johnny Carson had or what a ’90s talk show set looked like (because I did yell “OH THAT’S THE ’90S” when I saw Fallon’s hair in the ’90s look).

Not to mention how ’90s Olsen’s vibe was, either. Honestly, it just further confirmed my thought that I am Elizabeth Olsen.

this is just a picture of what i look like on a regular basis pic.twitter.com/73qFNG5Bw7

All this has done is make me sad because WandaVision is coming to an end and there isn’t another season in sight. Elizabeth Olsen went on to talk a bit about how Wanda was going to be in Doctor Strange in the Multiverse of Madness and how WandaVision is a jumping off point for her character in the future of the Marvel Cinematic Universe.

While I’m excited about Wanda continuing to grow in the MCU, I hope that after Doctor Strange, we can get confirmation of a second season for WandaVision because the show did a great job setting up Wanda and her “House of M” storyline from the comics, and I think it’d be better to explore the meat of that storyline in a second season rather than throwing it into Doctor Strange in the Multiverse of Madness.

Whatever happens in the finale of WandaVision, I hope that my favorite girl is safe. I’m not naive, I know that Wanda has a lot of suffering still to do, but I just worry for her. She’s been my favorite hero for years and now that I’m finally getting my time on screen with her, I want to make sure she’s treated the right way. And so far, WandaVision has done a great job with her story and I just want more of Wanda Maximoff in my life.

WandaVision‘s season 1 finale airs on Disney+ this Friday and I’m honestly scared for what the future holds for Wanda Maximoff and the Vision.