Blending Romance & Coming of Age in Gay YA | The Mary Sue

Falling in Love With Ourselves: Blending Romance and Coming-of-Age Narratives in Gay YA Fiction 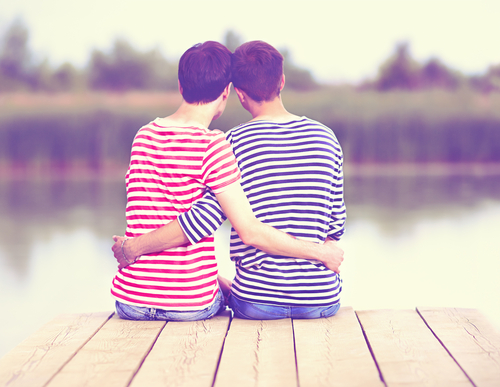 No matter our age, we’re always changing and growing, but in many adult novels, there’s a stigma to being in still-figuring-things-out mode. It’s framed as flighty, irresponsible, and impractical. In Young Adult and New Adult novels, however, the characters are at an age when it’s culturally acceptable to still be figuring things out, so change is the crux of the story. One of the main reasons I love reading YA and NA fiction (and I suspect so many other adult-adults do too) is because I’m still figuring things out too. Most of us are.

The quest for identity is the process of falling in love with a version of yourself—the self you want to be, the self you are making strides toward, or maybe the self you already are. College, then, is a potent setting for this romance of the self. Not only are the characters learning about themselves and changing, they’re also meeting a ton of other people going through similar changes. It’s a teeming mass that’s in flux all the time.

It’s into this double romance that Leo enters in my new novel Where We Left Off. He has just arrived in New York City for college and is falling in love with the city, with physics, with new friends, and with what his life could possibly look like. He’s also hardcore falling in love with Will Highland, someone who challenges everything that Leo thinks he knows to be true about love and relationships. Because Leo’s romance is twofold, it was necessary for his story to include both. The journey of figuring out who he is becomes inseparable from that of figuring out what he thinks love is, from learning about his own desires, and from contemplating all the different ways there are to have relationships.

What Leo learns, as he considers each possibility, is that there are infinite potential selves to fall in love with, just as there are infinite ways to have relationships. There aren’t right or wrong ways, just ways that work or don’t work for the people involved. Love is the ultimate multi-verse because each new possibility opens up a whole new potential life.

In coming of age novels—in romances of the self—the Happily Ever After necessarily looks different than it does in genre romances, too. These characters are falling in love with themselves, and with their lives, but these things aren’t static, so neither is the “ever after.” Instead, they are gaining the ability to know what they want, and to be true to those desires even as they change. And that self-knowledge is the greatest happily ever after that I can imagine.

Roan Parrish lives in Philadelphia, where she is gradually attempting to write love stories in every genre.
When not writing, she can usually be found cutting her friends’ hair, meandering through whatever city she’s in while listening to torch songs and melodic death metal, or cooking overly elaborate meals. She loves bonfires, winter beaches, minor chord harmonies, and self-tattooing. One time she may or may not have baked a six-layer chocolate cake and then thrown it out the window in a fit of pique.