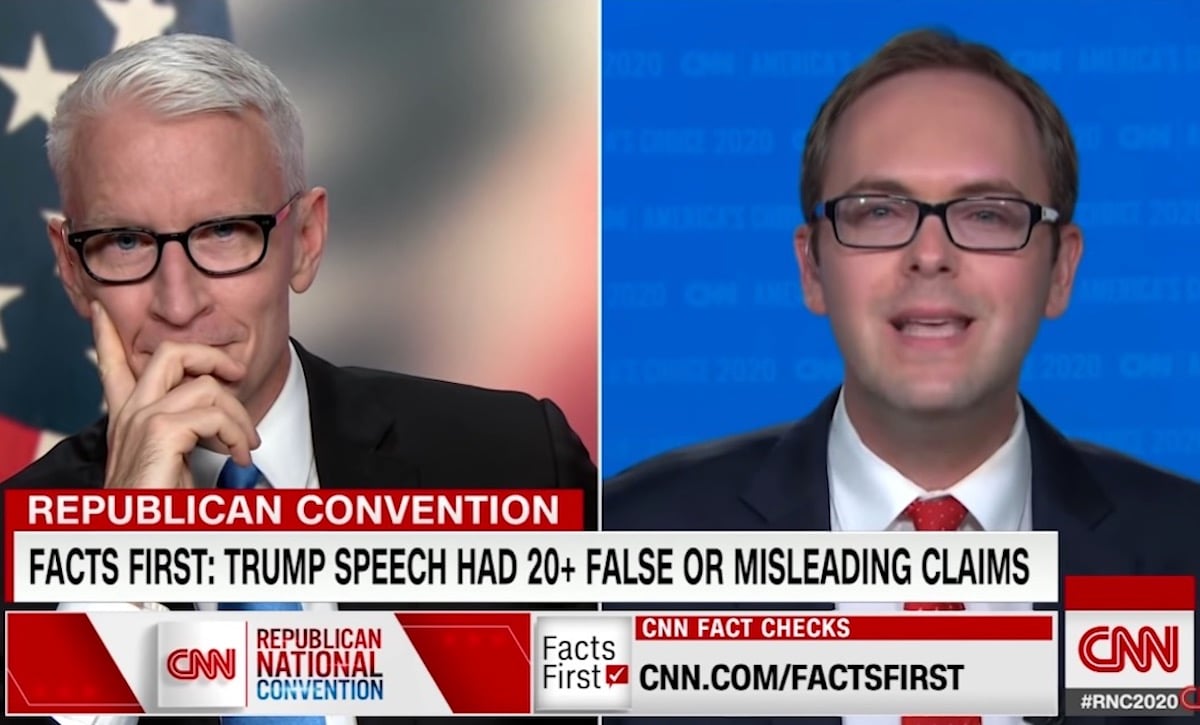 Donald Trump lies so much and so often that most people have developed a major fatigue around hearing them. If Trump is speaking, he’s likely lying, exaggerating, or saying something otherwise untrue, so what’s the point in acting shocked or even paying attention at all, right? His lies have become utterly normalized which is, of course, exactly the point.

If you’re suffering from Trump Lying Fatigue (and also if you’re not!), I highly recommend watching CNN’s Daniel Dale’s lightning-speed fact-checking session regarding Trump’s nomination acceptance speech from the Republican National Convention. By Dale’s count, Trump lied more than 20 times in the 70-minute speech, and Dale lists them all (or at least a lot of them) in just over three minutes.

Hell of a thing to watch CNN’s @ddale8 fact-check the cascade of lies from Trump’s speech. pic.twitter.com/aRQuHf0qE5

Definitely do yourself a favor and watch that video. Whether you watched Trump’s speech or not, this is everything you need to know about it. Trump lied over and over, mostly about Joe Biden but also in boasts about himself. He claimed Biden would do all sorts of things if he is elected, from tearing down the existing sections of border wall to taking everyone’s guns to defunding the police. He claimed that he himself passed the Veterans choice bill, that he stopped travel from Europe in the face of the coronavirus, that he is protecting patients with pre-existing conditions. Dale refutes all of these (with receipts) and so many more false claims in rapid-fire.

As Dale noted on Twitter, it’s not just the number of lies that’s really worrying, although it certainly is that too. “Aside from the quantity, one notable thing about Trump’s dishonesty last night: almost all of it was in his prepared text,” he wrote. “In general, the vast majority of his lying as president has been ad-libbed. In campaign season, they start putting the lies in the scripts.”

Donald Trump spoke for 70 minutes to convince Americans why they should vote for him and all he could come up with were 20+ lies.

The president is doing a lot of lying.