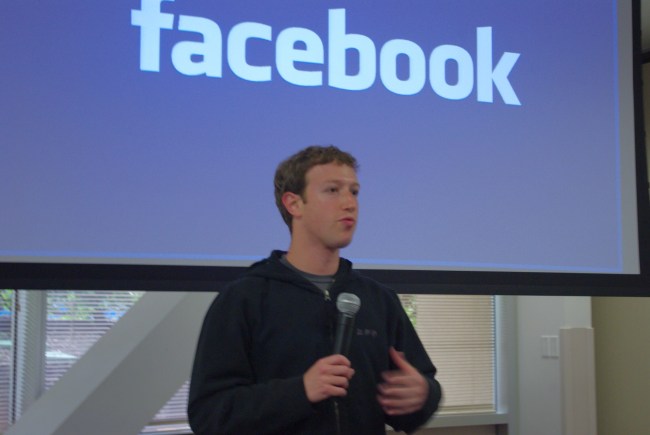 Does Facebook have a bias against conservative news outlets? CEO Mark Zuckerberg will be making the case against that claim this week, as he plans to meet with several “leading conservatives” to discuss the issue.

The controversy began a week ago with an anonymous claim from a self-identified former Facebook contractor, who claimed that the company had a liberal bias when it came to selecting stories for the “Trending Topics” sidebar. A month ago, an internal company poll got leaked, in which an employee questioned whether Facebook had a “responsibility” to “prevent President Trump.” All of this sparked a debate about how much control Facebook exerts over its news feed algorithms.

Facebook responded to these claims with a detailed post explaining their guidelines for Trending Topics, with assurances throughout that they “do not permit the suppression of political perspectives” (this exact phrase is used twice, word for word). The Trending Topics sidebar does make use of an algorithm for selecting popular stories; this algorithm is supplemented by a team of human news reviewers who do end up having some say over what ends up in the sidebar.

Facebook released the full text of their internal editorial guidelines used by news reviewers; it’s a 28-page PDF document that explains exactly how the team operates. There are a couple of sentences in the document that have been blacked out, but these appear to refer to Facebook’s internal tools, rather than indicative of some larger conspiracy about Facebook trying to silence specific perspectives.

These public responses from Facebook still didn’t quiet the concerns from conservatives about the website’s alleged bias, however. The debate about the social media outlet went all the way to the United States Senate, with Republican senator John Thune telling NBC that he wanted “to haul Facebook employees before Congress.” Last week, the GOP made an official statement titled, “Facebook Must Answer for Conservative Censorship,” which expressed similar concerns about the issue.

That brings us back up to this week, when Mark Zuckerberg will be meeting with conservative media figures like Glenn Beck, Dana Perino, and Zac Moffatt, among others. Glenn Beck made a Facebook post of his own yesterday, stating:

While they are a private business and I support their right to run it any way they desire without government interference, it would be wonderful if a tool like face book INDEPENDENTLY CHOSE to hold up Freedom of speech and freedom of association as a corporate principle.

The irony of Beck posting this missive on his own wildly popular Facebook page seems to be lost on him. Doesn’t seem like Facebook is censoring Glenn Beck! Jokes aside, though, it is true that Facebook has the power to make or break journalistic outlets, depending on the whims of its algorithms. Both Facebook and Twitter are huge drivers of traffic to news outlets, which is why it’s worth addressing the concerns about how their algorithms operate. Even if “Trending Topics” doesn’t seem like a particularly important part of the Facebook lay-out (I admit, I barely look at that sidebar), this has sparked a larger and more important conversation about Facebook’s responsibility to be transparent about its editorial curation methods.

The concerns about Facebook’s supposed anti-conservative bias seem like an oversimplification of a much more difficult problem. As I’ve said in covering this story previously, all algorithms have a bias. Algorithms are made by humans, and humans have biases. It would not be possible for Facebook to be completely devoid of biases. However, in its branding, Facebook does not present itself as a news outlet with a specific editorial voice; instead, Facebook comes across as a faceless algorithm-driven entity with the illusion of objectivity. Up until this controversy, very few people knew that Facebook had a team of news reviewers working on the Trending Topics sidebar. Now, we know more about how Facebook works. We still don’t know everything, but we know more than we did before.

I do think it’s valuable to think more about how the internet delivers news to us, and how human bias gets reflected in what stories get delivered. Because social media delivers a lot of our news now, the “bias” that I see happens when stories have a high level of meme-ability. I would guess that the Facebook employee who wanted to “prevent President Trump” noticed this too. The news seems “biased” towards delivering stories with a certain viral slant, and unfortunately, that doesn’t always translate into the most important or valuable stories. Sometimes it does, but certainly not always.

Many people have already written about how social media has changed the way that we think about candidates, particularly this year. I’m not the first person to cite social media as one possible reason for Trump’s unexpected success. What’s more, social media has the ability to influence elections in other more minute ways; back in 2014, Facebook proved they have the ability to increase voter turn-out simply by including a voting-themed button their front page.

It’s not a question of whether or not Facebook has the power to change people’s minds and behavior. We already know that they do have that power. But how are they using that power? Are they thinking about this as carefully as other news outlets would, in terms of what they cover and surface on the front page? So, in the tradition of stopped clocks, I guess I actually agree with Glenn Beck on this one: more transparency can’t hurt, here.

(via VOA News, image via Jakob Steinschaden on Flickr)