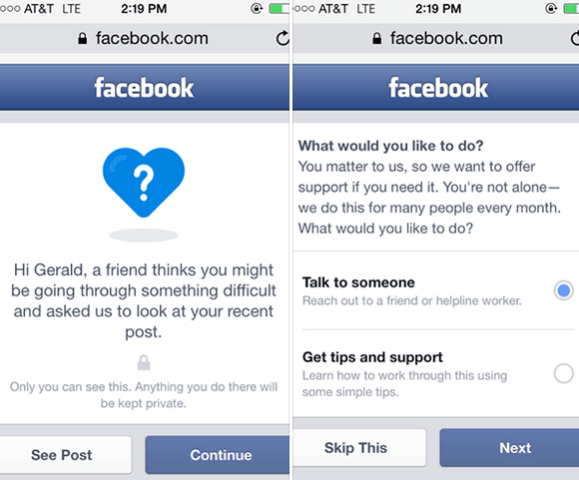 Trigger warning for self harm and suicide.

In two separate posts this week, Facebook announced that the company will be increasing resources for members who may be contemplating self-harm or suicide, as well as adding a more free-form option for users to describe their gender identity.

Like any social media platform, Facebook obviously doesn’t have a perfect history of sensitivity, but in a message yesterday the company re-committed itself to keeping users safe, explaining:

Today, at our fifth Compassion Research Day, we announced updated tools that provide more resources, advice and support to people who may be struggling with suicidal thoughts and their concerned friends and family members.

We worked with mental health organizations Forefront, Now Matters Now, the National Suicide Prevention Lifeline, Save.org and others on these updates, in addition to consulting with people who had lived experience with self-injury or suicide.

One of the first things these organizations discussed with us was how much connecting with people who care can help those in distress. If someone on Facebook sees a direct threat of suicide, we ask that they contact their local emergency services immediately.

We also ask them to report any troubling content to us. We have teams working around the world, 24/7, who review any report that comes in. They prioritize the most serious reports, like self-injury, and send help and resources to those in distress.

Facebook also worked with its clinical and mental health partners to increase the immediate support and resources available to a user logging back into the site for the first time since posting content which was flagged for review. Members will be given advice on “working through these feelings” and encouraged to connect with an expert at the National Suicide Prevention Lifeline or a friend. Users who flag a post will also be prompted to “call or message their distressed friend letting them know they care” or reach out to “another friend or a trained professional at a suicide hotline for support.”

The new mental health resources will be rolled-out to everyone using American Facebook over the next month; the company hopes to offer the tools to users outside of the U.S. soon.

Additionally, Facebook announced this morning that a 59th gender identity option will be available on the site starting today which allows users in the U.S. who “do not identify with the pre-populated list of gender identities” to add their own; Facebook software engineer Ari Chivukula, who identifies as transgender and was part of a team which created the new option, hopes a fill-in-the-blank selection will “open up a dialogue.”

Members can still use privacy settings to decide who sees their gender, but unfortunately the “interested in” field still offers only “men” and “women” as options (users can select both, neither, or hide the section entirely).

(via The Verge and Phys.org)