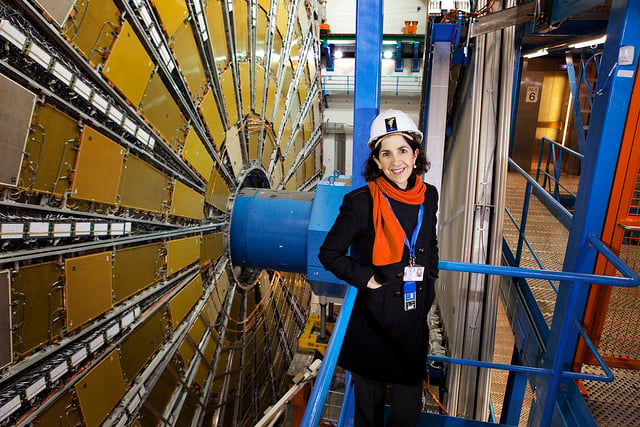 On January 1st Fabiola Gianotti will succeed Rolf Heuer as the Director-General of the European Organization for Nuclear Research (CERN), becoming the first-ever woman to hold the position since the organization was founded in 1954.

Gianotti previously headed a 3,000-person-plus team on the “ATLAS Experiment,” leading to the discovery of the Higgs boson in 2012, and earned accolades from her peers for her handling of a proton beam malfunction in 2009 (former CERN scientist Dr. Monica Dunford told reporters “She showed the whole of CERN that she could really handle that kind of pressure. It doesn’t really get worse than that”).

Gianotti is also a member of the Scientific Advisory Board of the UN Secretary General, and has been honored in the TIME 100 and Forbes’ “Top 100 Most Influential Women.”

Speaking to reporters, Gianotti explained that she personally hasn’t experienced gender bias while working in her chosen field, but that she knows that’s not the case for some of her peers:

In general I think the mentality is changing and people are more and more recognizing that what they are looking for is excellence in science, in managerial skill, etc.

I didn’t feel I was treated a different way because I was a woman. But I also have to tell that some of my colleagues had a more difficult life. … Some others suffered a bit and had to face some hurdles and some difficulties.

I am very much honored by the role, not so much because I am a woman, but because I am a scientist, and having the honor and the privilege of leading perhaps the most important laboratory in the world in our field is a big challenge. I will do my best.