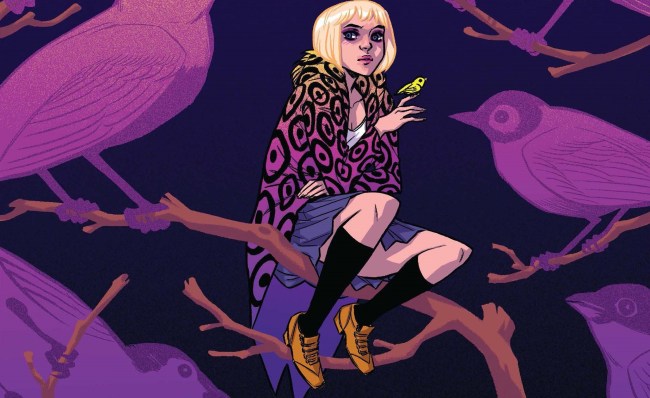 Reading Cecil Castellucci’s Shade, the Changing Girl from DC’s Young Animal imprint will kind of make you feel like you’re on something even if you’re totally sober. I mean that in the best possible way.

If you haven’t been keeping up with Castellucci’s book (with art by Marley Zarcone), Shade, the Changing Girl takes place after Steve Ditko’s original Shade, the Changing Man title. Castellucci’s version stars a female Metan named Loma who admires the late Rac Shade (the protagonist of Changing Man) and his poetry. She steals the Madness Vest from a museum and takes over the body of a comatose teenage girl on Earth. Wackiness ensues.

DC’s Young Animal provided us with a preview of Issue #5, which comes out this week. Here’s the official synopsis:

Which is more powerful? These new human emotions or the madness that brought Shade to Earth? Balancing both is difficult, as the divide between where she is now and where she comes from grows deeper. It’s all about duality as the future and the past are racing to catch up with Shade. She sees strange visions of a possible tomorrow while Megan, the girl whose body she stole, is racing across galaxies to take her life back. Plus, an all-new backup feature: Shade’s favorite TV show, Life With Honey, comes to comics!

Check out the first five pages of the issue in the gallery below, which boasts an all-female creative team in Castellucci and Zarcone, as well as covers by Becky Cloonan and Jenny Frison, colors by Kelly Fitzpatrick, and letters by Saida Temofonte (with an assist on inks for certain pages by Ryan Kelly). Have you been reading Shade, the Changing Girl? What do you think so far? Let the TMS community know what you think of the title in the comments below!