Exclusive: Get to Know Dark Horse Comics’ Henchgirl, And Check Out Her ECCC Exclusive Cover 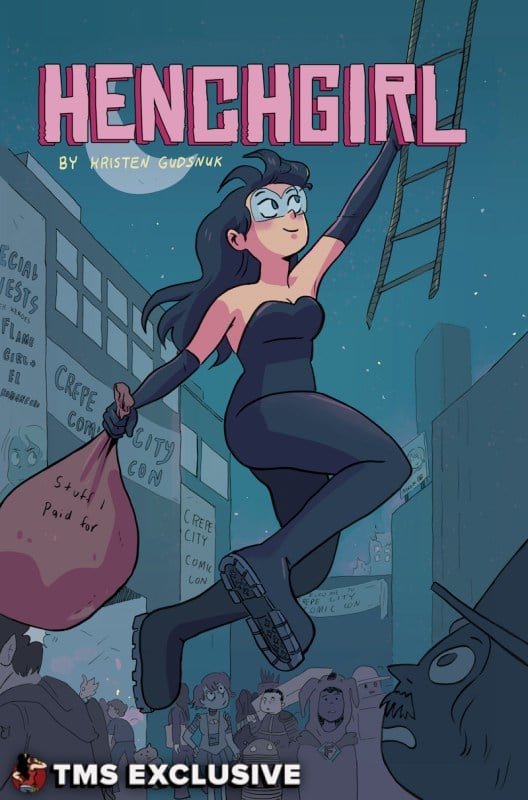 Lots of people aren’t thrilled with their current employment, but compared to working for a supervillain? Well, let’s just say you probably have it easier than you think. This month, Dark Horse Comics will be releasing the trade paperback of Henchgirl, which will be introduced and available to fans in advance of its release at Emerald City Comic Con this weekend, and they’ve given us an exclusive first look at the cover of the trade above!

Henchgirl is written and drawn by comics creator Kristen Gudsnuk, who originally created Henchgirl for Scout Comics. Now, Dark Horse Comics will be releasing the trade paperback of the first eleven issues and introducing the trade at ECCC where Gudsnuk will also be in attendance!

Here’s the official synopsis for Henchgirl:

Mary Posa hates her job. She works long hours for little pay, no insurance, and worst of all, no respect. Her coworkers are jerks, and her boss doesn’t appreciate her. He’s also a supervillain. Cursed with a conscience, Mary would give anything to be something other than a henchgirl.

From the illustrator of Little, Brown Books’ VIP: I’m With the Band. Collects issues #1-#11 from Scout Comics.

I love it when indie comics creators move up in the world, and of course have a soft spot in my heart for awesome female protagonists! If you’re at ECCC in Seattle this weekend, you can head over to the Dark Horse booth (Booth 1708) and get the con-exclusive version of the Henchgirl trade before it’s released to the general public! You can also get it signed by Gudsnuk, who will be at either the Dark Horse booth, or at Table AA-15 in Artists’ Alley throughout the weekend.

That is, she’ll be there when she’s not at her panel, “The Millennial’s Guide to Keeping Comics Alive,” on Sunday the 5th at noon.

I hope those of you at the con this weekend have a great time! I’ll try not to be too jealous that I couldn’t go this year. *sigh*