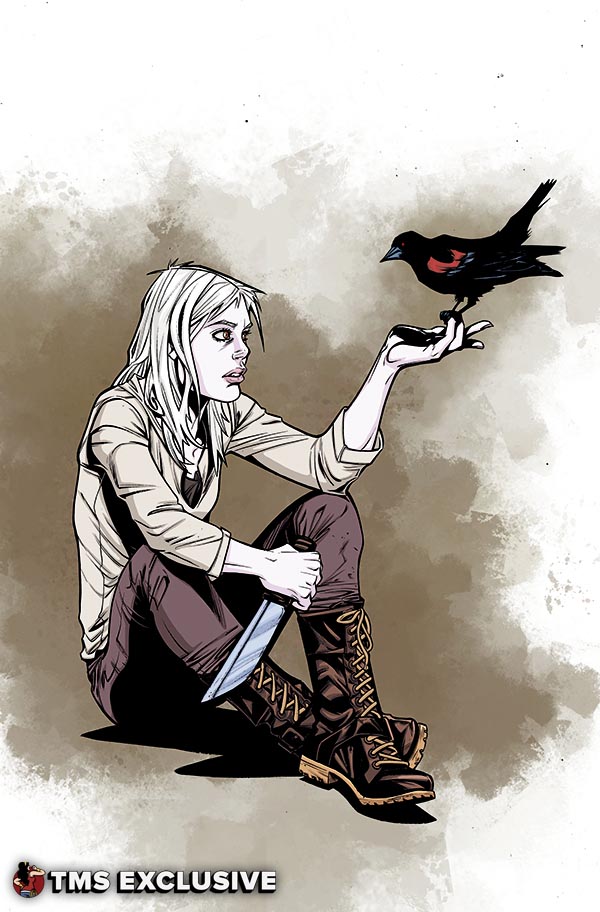 The Mary Sue is proud to announce Caitlín R. Kiernan’s newest addition to her Alabaster dark fantasy series, Alabaster: The Good, the Bad, and the Bird! Read on for more information and an interview with the creator.

A year after her death in a burning barn, Dancy’s Flammarion’s seraph comes to collect her from a Hell of her own creation. A new evil haunts the sun-scorched back roads and ghost towns of the American South – murderous twins who command a legion of ghouls. Once again, Dancy must face down demons, those who walk the world unchallenged and those in her own shattered mind.

We spoke with the award-winning Kiernan, whose novel Threshold is where the Albaster comic series sprung from, and whose comic work has also included Vertigo’s The Dreaming, a spin-off from Neil Gaiman’s The Sandman.

The Mary Sue: First off, congratulations on this announcement of another installment of your Alabaster comic series. Does it feel good to be back working with your characters?

Caítlyn R. Kiernan: It does, yeah. There are a tiny handful of my characters who feel to me like comfortable old clothes. And with Dancy and Maisie and Bird, there’s unfinished business, a story that is, in a sense, very much incomplete.

TMS: Where do we pick up with the story for this new series and what can we expect as Dancy’s journey continues?

CRK: Alabaster: The Good, the Bad, and the Bird begins about a year after the conclusion of the final third of Alabaster: Grimmer Tales. As for where this story will take Dancy, Maisie, and Bird, there’s really not a lot I want to say, for fear of spoiling the story. But it’s a dark place. Probably a much darker place that in any of the previous Dancy stories I’ve done for Dark Horse. And something I very much want to explore is the relationship between Dancy and Maisie, which has, thus far, only just barely been touched upon.

TMS: Have you noticed a great change in the comic industry from the time of your previous comic work at Vertigo to now? Whether on the business/marketing side of things or the readership?

CRK: There’s really nothing much I can say about the marketing end of things. It’s just not something I have enough experience with, or interest in, that I’m able to offer an informed opinion. But as for the difference between working with Dark Horse versus working for Vertigo, that’s been day and night. I’ve much more freedom with Dark Horse, and partly, obviously, that’s because I own the characters, so I’m not hamstrung by the publishers’ rules about what is and isn’t permissible. I’m free to develop them as I see fit, and I’m free to take the stories where I feel they need to go.

TMS: Many of our readership are looking for “strong female characters” in their fiction. How would you define that term?

CRK: Honestly, I don’t sit down and think, “I’m going to write a strong female character.” Most of the characters I write are female, whether we’re talking about my novels, my short fiction, or my comics work. And I feel like it’s my first job, in creating them, to make them real people. Dancy and Maisie, they’re not reactions against the way female characters tend to be portrayed in comics – even though I often find those portrayals sexist and absurd and personally offensive. What I’m really looking for, I think, is a balance. The flaws in any character are just as important as the weaknesses. You look at Dancy one way, and yeah, she’s a strong person driven by an almost unimaginable resolve. But, you turn her another way, look at her in a slightly different light, and you see the flaws in her that can easily be her downfall. The stories may be fantasy, but I’ve always had a conviction that people have to be presented realistically, regardless of industry and genre expectations.

TMS: What fiction to you both enjoy?

CRK: My readers are often surprised that I don’t actually read a great deal of fantasy, given that, as an author, I am a fantasist. That said, there are certain authors of fantasy, science fiction, and dark fiction who are very important to me: Lovecraft, Shirley Jackson, Ray Bradbury, Angela Carter, Frank Herbert, William Gibson, Harlan Ellison – these are works I come back to again and again. I’m actually probably, truthfully, a more voracious filmgoer than reader, and movies are at least as important an influence on my writing as is prose fiction.