And now it's about those things, plus "AdviceAnimals." 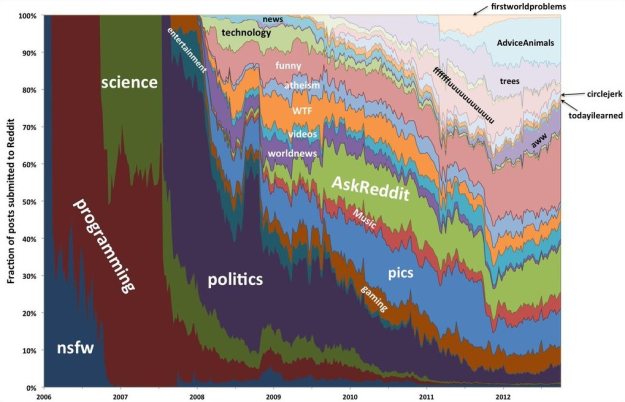 According to the research that Computer science PhD student Randy Olson did back in March of this year, when Reddit was first established in 2005, it was basically made of “NSFW” content and “programming,” with a little bit of “science” thrown in. At least, that’s what most users were posting about back then. Now those three topics have been completely overshadowed by the vastness of Reddit’s base.

Olson put together this graph by charting the 24 most popular subreddits as they first appeared over time. On his blog, he adds:

The biggest thing that you may notice is that there were very few subreddits from 2006-2008. In fact, there was only one subreddit before 2006 (/r/reddit.com). The majority of the content in 2006-2008 was focused on more techie-friendly subjects: programming, science, politics, entertainment, and gaming. Major subreddits dedicated to solely picture and video content started becoming popular in mid-2008, and even then their posts only comprised less than 1/4 of Reddit’s content. It wasn’t until 2011 did the picture-related subreddits really start taking over, and Reddit never looked back after that.

Go and check out the rest of his charts outlining the growth of Reddit, because they’re all endlessly fascinating.