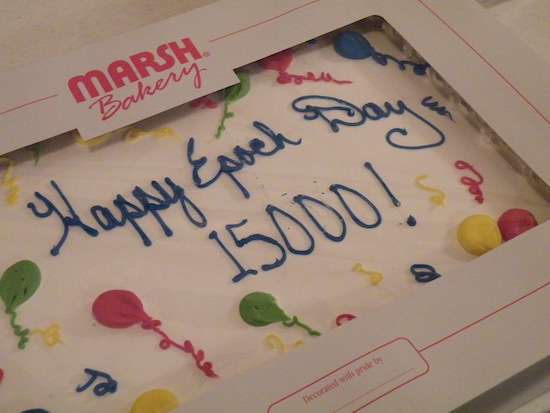 Even though UNIX was first released in 1969, the Bell Labs engineers who developed the operating system decided that for the sake of round numbers, UNIX time should begin on January 1, 1970, which is known as the beginning of the UNIX epoch. 41 years and 25 days later, today marks the 15,000th day in UNIX time.

The folks behind day15000.com celebrated last night at a DJ party with 40 people, cake (above), and pizza.

The last time we turned a 5k mark (day 10000) was May 19th, 1997, nearly 14 years ago. Entire computing paradigms and the rise and fall of operating systems happen in less than that amount of time. You probably weren’t doing what you are doing now 14 years ago, Heck, you probably weren’t even on the Net 14 years ago. So its really time to celebrate the fact that an operating system design can last for not just 14 years, but 41 years.