Stem Cells Made From Cloned Human Embryos for the First Time 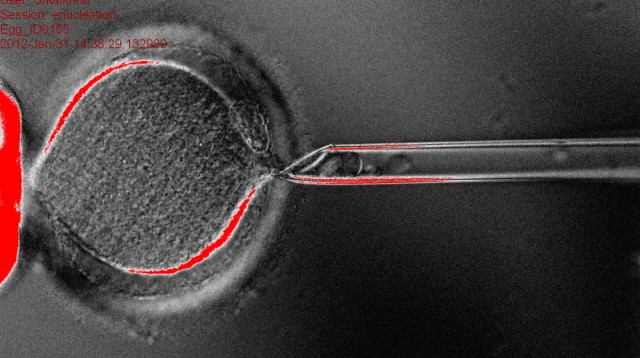 In a scientific first, researchers at Oregon Health & Science University have created cloned human embryos they can use to harvest embryonic stem cells for human transplant. The long-sought advance — which has the potential to make stem cell therapies safer and less prone to rejection — has been the goal of many stem cell researchers for years, and will no doubt prove controversial, but could have the capability to drive the next stage of development in human stem cell therapies that could one day prove capable of of treating a vast range of diseases.

The research, published today in the journal Cell, marks a significant step forward in the use of stem cells to treat disease. Taking cues from previous successes in harvesting stem cells from cloned embryos in rats and monkeys, OHSU researchers led by Dr. Shoukhrat Mitalipov started with a human egg cell from a donor. The DNA-containing nucleus was pulled out of this egg cell, and in its place, the team inserted skin cells from another human subject. Then — and this has been the confounding step until now — the team induced the egg cell to grow and divide into an embryo without being fertilized by a sperm cell.

Today, it appears that the team’s years of hard work have paid dividends, as they report in the Cell study that they have discovered how to make that transformation happen reliably by applying a combination of chemical cues and electrical pulses. That embryo — which, for the record, was never a baby, or anything like a baby, or anything with the potential to be anything but a clump of stem cells, least of all a baby — can then be harvested for embryonic stem cells to be used to treat ailments suffered by the skin cell donor.

Since the stem cells are from an embryo, they are very pliable, and can be induced to take the form of any of the body’s adult cells. And because the cells being used for treatment from the cells of the person being treated with them, the chances of rejection are much lower than they would be with cells from another donor.

While we can still expect that it will be years before cells produced in this manner are used in any sort of widespread medical application, this is great news and a testament to years of grueling lab work paying off.