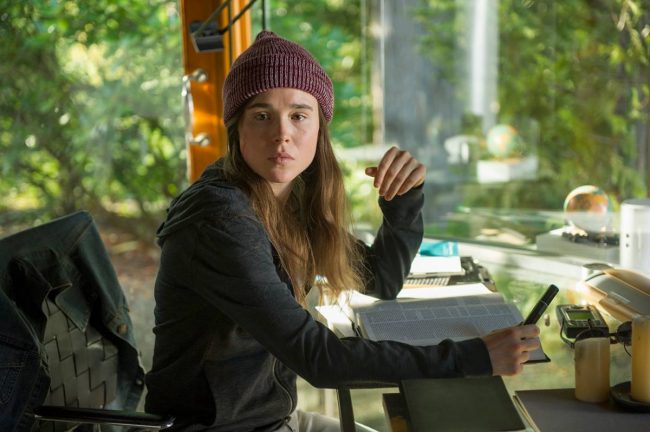 A day after it was announced that Ellen Page would be playing one of the lead roles in the upcoming Umbrella Academy series for Netflix, she’s taken the opportunity to post a statement on her Facebook page addressing the extent of the sexual harassment and assault that goes on in Hollywood. Not only does she speak to her own experiences, but she attempts to amplify those who don’t have her privileges.

First, she tells a story from her experience with a specifically homophobic bent. During a cast and crew meet and greet at the beginning of filming on X-Men: The Last Stand, when Page was only eighteen, director Brett Ratner outed her in the most disgusting and callous way, which she credits for shaming her into the closet for much longer than might have happened otherwise. Page writes:

“I was a young adult who had not yet come out to myself. I knew I was gay, but did not know, so to speak. I felt violated when this happened. I looked down at my feet, didn’t say a word and watched as no one else did either. This man, who had cast me in the film, started our months of filming at a work event with this horrific, unchallenged plea. He ‘outed’ me with no regard for my well-being, an act we all recognize as homophobic.”

She goes on to recount how that moment affected her and her relationship with her own sexuality and self-esteem, before describing other moments during her younger teenage years in the industry when she was propositioned by powerful men, or sexually assaulted by a crew member.

Page then describes the environment in which predators and victims operate, the specific things that make it difficult to report certain behavior or incidents. It’s not about victims of harassment and assault being “too weak” to come forward. It’s about predators being exceedingly good at manipulation and threats. That’s kinda the whole thing about being a predator: you’ve developed the skills necessary to prey upon people well.

As marginalized as Page is by being a woman and a lesbian, she’s also white and cis, and she understands that this, coupled with her industry position and financial stability affords her privileges that other women don’t have. She makes it a point to spotlight and amplify the struggles of women of color, indigenous women, trans women, and poor women, reminding us that she has privilege in large part because those women fought for it, and now she wants all of us to listen to and fight for them:

“Let’s remember the epidemic of violence against women in our society disproportionately affects low income women, particularly women of color, trans and queer women and indigenous women, who are silenced by their economic circumstances and profound mistrust of a justice system that acquits the guilty in the face of overwhelming evidence and continues to oppress people of color. I have the means to hire security if I feel threatened. I have the wealth and insurance to receive mental health care. I have the privilege of having a platform that enables me to write this and have it published, while the most marginalized do not have access to such resources. The reality is, women of color, trans and queer and indigenous women have been leading this fight for decades (forever actually). Marsha P. Johnson, Sylvia Rivera, Winona LaDuke, Miss Major, Audre Lorde, bell hooks, to name a few. Misty Upham fought tirelessly to end violence against indigenous women, domestic workers and undocumented women. Misty was found dead at the bottom of a cliff three years ago. Her father, Charles Upham, just made a Facebook post saying she was raped at a party by a Miramax executive. The most marginalized have been left behind. As a cis, white lesbian, I have benefited and have the privileges I have, because of these extraordinary and courageous individuals who have led the way and risked their lives while doing so. White supremacy continues to silence people of color, while I have the rights I have because of these leaders. They are who we should be listening to and learning from.”

Ellen Page is wisely using her platform for Good. Check out the rest of her post, and then check out the stories of the other women she mentions. Remember that it isn’t just celebrity women who suffer in Hollywood, but those without names who work in offices or behind the scenes. And remember, of course (how could we ever forget), that harassment and assault aren’t just Hollywood problems. They are part of the systemic sexism that plagues our entire society, and we all have our share of work to do.