The Double Lives of Elektra Natchios and Karen Page, Daredevil’s Other Vigilantes 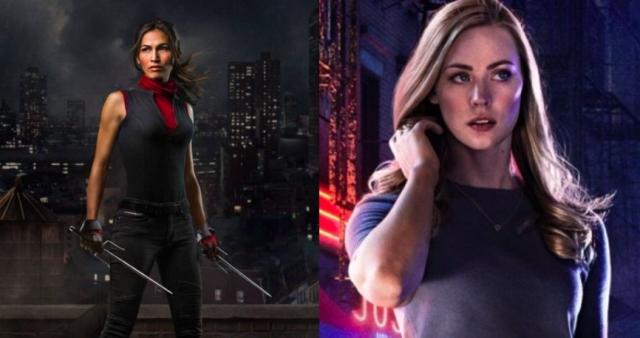 All the Daredevil spoilers below, seasons 1 and 2.

In Daredevil Season 2, which released on Netflix March 18th, the divide grows between lawyer Matt Murdock, and his vigilante hero self, Daredevil (Charlie Cox). For many superheroes, the day/night self is the struggle, but perhaps it’s more stark for Matt Murdock, with contrasts of religion and law. Is Matt a Catholic, or the Devil of Hell’s Kitchen? Is he a lawyer, or a criminal, committing multiple assaults a night? This season, he even has two different love interests, one for daytime Matt Murdock, the courageous Karen Page, and one for his Daredevil excursions in the night—his ex, the dangerous Elektra Natchios.

Matt is caught between his two identities and relationships, but what about the women themselves? They, too, are each caught in double lives, and they both struggle with how their relationships with Matt challenge the selves they’re avoiding. Like Daredevil, Karen and Elektra have to choose who they’re going to be—and suffer the consequences.

Karen Page (Deborah Ann Woll) has had the biggest character growth on Daredevil. From Union Allied secretary, to legal assistant, to vigilante sidekick and front-page reporter, Karen consistently does the unthinkable: she pushes back. She’s a conspiracy hunter and far from a helpless victim. In season 1, she proved it when she was kidnapped by Kingpin’s right hand man, Wesley. He lays a gun on the table in front of her, and laughs, saying she’ll never shoot.

Well, she does. She kills him, and survives. And tells no one.

At the beginning of the season, Karen is still Nelson and Murdock’s legal assistant, and while watching over a client/member of the Irish mafia, she encounters the Punisher (Jon Bernthal) first hand. Miraculously, she’s not killed. But then Karen begins to suspect it wasn’t so much a miracle, as an intentional sparing of her life. She decides to dig deeper—and uncovers that the Punisher’s family was killed in gang violence, and he’s looking to kill gang members and leaders exclusively, not innocent lives. She begins putting pieces together to understand him better. 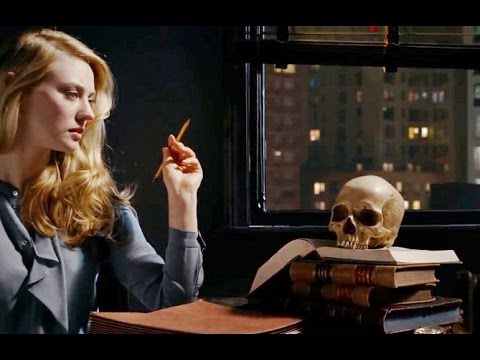 I’m just saying, instead of Daredevil, this could totally be a season of Karen Page.

Alongside their legal work, Matt and Karen finally start dating, and enjoy some simply adorable dinners and kisses. Matt sees Karen as an escape from his troubling night life—she seems sweet and normal. At the end of their first date, she asks him if he wants to come up, and he says he can’t: he wouldn’t want to “ruin” a perfect night. Would sex with Karen ruin Matt’s projection of her? As this innocent woman, his pretty legal assistant?

But in episode 7, a heated conversation between them illustrates that Matt’s projection onto Karen is damaging, and wrong, and furthermore, the “day” self he presents in this relationship challenges her own “night” self.  While working on Frank Castle’s trial, the new couple discover that they feel very differently about Frank’s alter ego, the Punisher.

Karen: “I keep asking myself if there’s a difference between people who save lives, and people who prevent lives from needing to be saved at all. Right?”

Matt: “Wait. Wait a second… Frank Castle should be behind bars. I mean, he deserves a fair trial, but he’s murdered people.

Matt: “But it’s not Frank’s decision who lives or dies. That’s up to God. Or sometimes a jury.”

As Murdock the lawyer, Matt’s a Catholic, against vigilantes, in favor of working the judicial system. He pushes his firm to defend the Punisher in court, but wouldn’t defend him morally himself. He’s a man who doesn’t condone any kind of violence. He also thinks he’s dating someone who feels the same way.

Karen Page is another story. Matt doesn’t know it, but she’s killed. She feels guilty and defensive, but she got on with her life—and her connection to the Punisher shows where her morality lies. Daredevil might understand her feelings better, if he knew the whole story, but she’s dating Murdock, who’s made a dozen or so assumptions about her as a person.

The rest of the season is a Karen Page superhero story, IMO. Nelson and Murdock goes under, and she becomes a reporter—her new day-job goes well with her night time secret identity: Punisher’s sidekick. She becomes Frank’s ally, and helps him get revenge, and tells his real story. When he’s being framed, she believes him. In violent incident after incident, Karen’s there, collecting clues at the scene of the crime. She fully embraces the darker side of herself, and acts outside the law to accomplish her goals.

If I was a cop, say Sgt. Brett Mahoney, I’d be asking: is Karen Page a vigilante too?

The answer is yes.

Elektra Natchios (Elodie Yung) has a long past with Matt Murdock lawyer as well. They dated “in college,” meaning, while Matt was in law school. Their past is complicated. In a series of flashbacks during episode 5, we see that their relationship became intense rather quickly: they went from zero to planning their future together. Part of their immediate connection comes from them both sensing disorder in one another—that they’re not playing the same game as everyone else. In one flashback, they go to Matt’s father’s old boxing ring, and Elektra guesses that Matt isn’t being completely truthful about his abilities. The two engage in physical combat that ends in sex, which *gasp* we actually see. Clearly law school Matt recognized that sex does not ruin an evening.

But then Elektra takes things too far. In the final flashback, we see that she found the man responsible for Matt’s father’s death. She lures Roscoe Sweeney to them and ties him up. Matt throws a few punches, but is horrified when Elektra tells him to finish the job. Matt’s reaction throws Elektra off-balance:

“I thought you understood me,” she says.

“Yeah, I thought I did too.” He replies, and then calls the police.

While he’s on the phone, Elektra disappears. 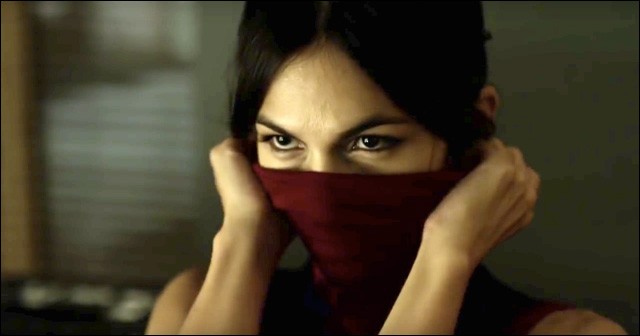 So now she’s back—with a new game and machinations. And bonus, her own vigilante outfit! (Which somehow doesn’t have sleeves. And she actually gets cut on her shoulders. Someone get this woman sleeves for season 3.)

Elektra whisks Matt back into her world of violence—she’s conducting her own vigilante investigations, and wants Matt’s help. With Foggy constantly insisting the alternate Daredevil life is unacceptable, and because he still hasn’t told Karen, I think Matt craves the company of someone who knows and accepts that part of himself.

And Elektra? She’s still in love with Matt.

And therein lies her own identity crisis. Through more flashbacks, we see that Elektra was raised by Stick to be a fighter. She kills people—it’s what she does. She should, in a more clear cut cartoon world, be a villain. Yung recently quoted Frank Miller, Elektra’s creator, explaining that Elektra is a villain with a “weak streak.”

Though it’s part of her, Elektra doesn’t want to be a killer—because that’s not a good person thing, according to Matt. And she knows Matt will only be with a good person. It’s a constant, complex struggle for her, and we get to see it played throughout the season: she kills while Matt refuses to, she sees Karen Page, the perceived innocent girl day time Matt will actually date. Halfway through the season, she makes one too many impulsive kills (a young ninja who was going to assassinate them), and history repeats itself: Matt’s horrified; Elektra runs away.

Like Karen Page, I began to question my own ideas of morality and justice in the Marvel universe, comparing them to the vigilantes during this season. With this last incident with Elektra, I began to wonder—

Is what Daredevil does so much better than Elektra? Just because he refuses to actually deal the final blow? We’ve seen him assault people to the point where they’re probably not recovering. We’ve seen him throw people, so many people, down stairwells. Is that so much better? Does Matt really get to be on his high horse, towering down over Elektra? It seems like even his Daredevil self, who participates in violence regularly, gets to feel superior to Elektra, even though she’s also working to save the world this season.

It’s confusing, to say the least. And that’s why I can’t stop watching.

In the season finale, Elektra is revealed to be The Hand’s ultimate weapon, Black Sky. She’s given a choice: become the absolute destruction she has always felt, or fight it with Matt and probably die. Though it takes some time, Elektra follows her weak streak to a new identity.

Both Elektra and Karen have incredible growth this season, both triggered by their relationships with Matt. The brilliance of Daredevil season 2 is that not only is Matt struggling with identity and decisions, the people who come in contact with him do as well—perhaps that’s the nature of being a superhero. Nothing is simple anymore, and if you rise up to change things, you’re going to change the people around you too.

Can’t wait for spin off shows Karen Page and Elektra.

Molly Booth is a freelance writer and author of the YA debut, Saving Hamlet, coming from Disney-Hyperion publishing house in 2016. She writes books about Shakespeare and feelings. She was homeschooled through high school, which means she gained her Geek/Nerd/Dork Certificate at an early age. She lives in Portland, ME and has almost too many pets. Almost. Follow her on twitterand tumblr for more nerding.