These Are Pictures of Electron Orbitals 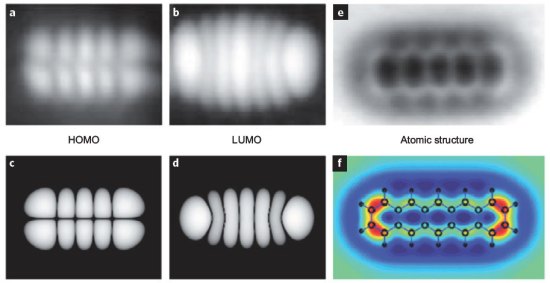 What’s the new in hot, hot physics eye-candy? Pictures of electron orbitals. Using an atomic force microscope (AFM), physicists have been able to take the closest look at atomic structure that we’ve ever seen, getting down as far as electron orbitals. Now, what you see above are pictures of the places around the nucleli of the atoms where electrons are most likely to be. Where are the actual electrons? Well, I’m no scientographist, but allow me to explain to the best of my ability.

You can’t actually get a depiction of any actual electrons because they are never actually in any single point-location. You see, electrons straddle the line between particle and wave, so you can find the probability that an electron exists in a given place, but not the actual electron. The models you probably learned in school are a bit oversimplified in order to avoid having to explain that you can never really isolate a single electron (or because your textbooks were from the early 60s).

The atomic force microscope works kind of like a record-player. The arm has a tiny needle (so tiny that you need an electron microscope to see it) and the needle will get bumped by — you guessed it — atomic force. The needle then jiggles the arm and jiggles a laser and the whole thing Rube-Goldbergs out until you have a map of the atomic structure up to and including electron paths.

The moral of the story here is that the observed electron orbits match up pretty well with what scientists have calculated mathematically. Pictures A and B are the observed images, while C and D are the respective calculated orbits. This probably suggests that everything we think we understand about the atomic structure and electron orbits is not horribly, horribly wrong, and that’s always a good thing. In addition, it’s just plain cool.