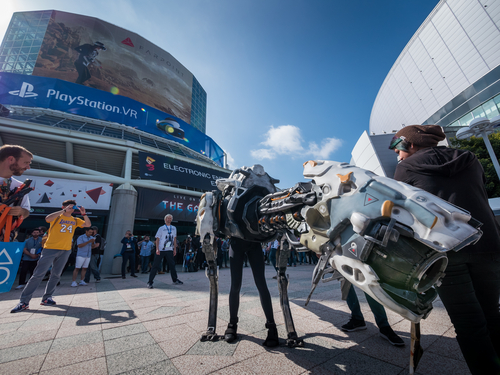 We’re just a few short days from E3 2017, the big ol’ gaming expo that all but consumes the Los Angeles area for what feels like an entire week. There are quite a few big announcements due in the coming days, and here are just a few things we’re looking forward to this year.

Last year was a pretty big deal for Sony with regards to hardware. Their virtual reality offering, PlayStation VR, made some waves as it was the first console-based VR headset available to consumers. It’s out now, actually, and one of the latest marquee games for that bit of hardware is Star Trek: Bridge Crew. It’s a pretty successful offering on the part of Sony, but they could stand to improve their VR software with a few more big-name titles. You can probably expect them to be a little software heavy, as this year should be a bit of a pendulum swing back the other way. All that sweet PS4 Pro hardware needs some good software support, right?

Another game I know I’m pretty stoked for is Death Stranding, the latest Hideo Kojima title. The mysterious hype around this title is about as wild as it gets, and with every bit of news that comes out about it, I find myself more and more invested in trying to find out just what the hell it is. Kojima himself did say that the game won’t be at E3, but I mean … take that with a grain of salt, you know? He’s done weirder things.

Speaking of hardware, Microsoft unveiled Project Scorpio last year in a video that had a lot to say about teraflops and other sweet hardware lingo that I’m not all caught up on. Phil Spencer announced in a blog post that this E3 is when we’d finally get a look at the new hardware as well as “the amazing game experiences it powers.”

What could those experiences be? Well, folks are expecting a look at Rare’s new multiplayer pirate-themed game, Sea of Thieves as well as some VR titles (because of course). More than likely you’ll see some new installments of the early vanguards that have often landed early on nearly all iterations of the Xbox: Forza, Halo, Crackdown, all your good ol’ sports titles (Madden, FIFA, etc.), and more. But the big draw of Project Scorpio is how it seeks to offer native 4K support for games. If that’s the case, then expect a lot of eye candy from Microsoft this E3.

Always the surprise, Nintendo’s pretty good about keeping their presentation and revelations under wraps. We do know for sure though that this year, we’re getting a crossover title between Mario and … wait for it … the Raving Rabbids. Yeah, I know, right? It’s apparently an RPG, and we have no idea how that’s going to work.

Nintendo’s already seen some smashing success with the launch of the Nintendo Switch, and you can pretty much expect their presentation to focus solely on that console and its unique offerings. Breath of the Wild ate up a ton of attention last year, and since excitement around that particular title has died down a little bit, one can expect another major announcement from Nintendo regarding another one of their landmark properties. If Mario’s already hanging out with the Rabbids, then chances are we might see more of Splatoon 2, or even another Pokémon game to follow up their recent announcement of some new Pokémon Sun/Moon sequels for the DS.

Outside bet (and total speculative hope): a new Metroid game would be so rad.

That’s only a tiny taste of what’s to come and what we hope to see. I’m personally super stoked to see some of the indie offerings that always make great presentations and debuts here. What are you hoping to see this E3?