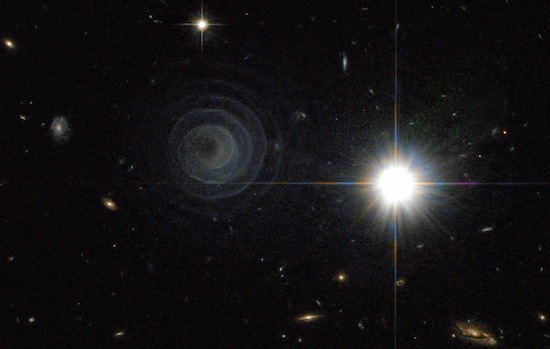 A red giant named AFGL 3068 is dying, but it’s leaving a neat space corpse in the form of a three trillion kilometer long spiral pattern of the red giant’s outer layers.

When a sun dies, it becomes a red giant. A red giant usually blows its outer layers into space, which get caught by solar winds and encapsulate the star, turning its escaping outer layers into something of a cocoon. The cocoon normally looks like a cloudy orb surrounding the red giant, except in AFGL 3068’s case, because its system is made up of two stars orbiting their common center of mass, otherwise known as a binary star. Due to the different orbital patterns a binary star takes, the outer layers that get caught in the solar winds don’t wrap the red giant in a cocoon, but get molded by the partner star into the spiral pattern seen in the above picture.

These death spirals aren’t generally discovered because the light from the red giant inside is being blocked by the spiral debris, so the partner star acting as a humongous space Spirograph isn’t the only odd bit of information regarding AFGL 3068: The astronomers studying the star believe the spiral pattern is visible because it’s being illuminated by galactic starlight. This means the star is in such a precise spot in the universe where the light of other stars, many light years away, actually reach the star with sufficient enough light left to make the pattern visible. Though the bright star in the picture above is situated on the brighter side of the spiral, astronomers aren’t yet sure if the star is situated close enough to the spiral pattern to provide any illumination.