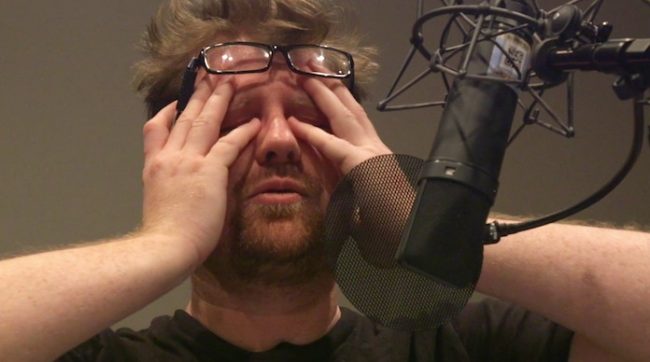 If one thing can be said about Rick Sanchez, it’s that the man knows how to party.

It’s not every day you run into a scientist who knows how to leverage his incredible intellect against the perennial problem of how to take this party to the next hecking level. Truth be told, I think that can explain more than a few issues that lie at the heart of many Rick and Morty episodes, but when it comes to real life, just where do co-creators Dan Harmon and Justin Roiland find their inspiration? Why, they do exactly as Rick does: they turn to the bottle.

In this lovely video from Adult Swim, we check out the behind-the-scenes process of what goes into recording some of Rick’s more ethanol-soaked lines.

I mean, it’s exactly what you’d expect, right? Here, Roiland kicks back a few (and then some) in order to nail Rick’s patent slurred speech style. There’s even a point where he records a line that the associate producer, Sydney Ryan, said was good! But Roiland, being the consummate professional he is, said it sounded too sober and moved to take another shot. I think that maybe half this video is people trying to convince Roiland to not take another shot—at least, another shot before they’ve even reached the halfway point.

Speaking of halfway points, that’s about where in the video that Roiland begins to get a little drunk-sad, showing off a bit of Rick’s own nihilism. His aside about presidents and what he’d do to himself with a gun was patently eye-widening, and I mean, hey, let’s remember that this is the same mind that brought us this joyful ending:

Oh, and of course, this is also the show that took home the award for Best Use of Johnny Cash’s “Hurt”:

Yeah. Don’t be so surprised.

Previously, Roiland shared a story about how painful it was to record all of Rick’s burps. He told Creators: “The pilot, that was the worst. For some reason I was like, ‘Rick has to burp every fucking line.’ So I was in there for four hours recording Rick, and just swallowing air and doing every single line with a burp take. I left that studio with the worst stomach ache. I went home and laid in bed and thought I was going to fucking die or have to go to the hospital, it was seriously bad. And the irony is that we cut the radio play together and Harmon was like, ‘There are way too many fucking burps in this,’ and I was like, ‘Oh fuck, you’re right! This is disgusting.'”

Never doubt Roiland’s commitment to the show and the bit … especially when it comes to drinking, I suppose.