When the pictures of Yogi, a five-year-old corgi, being followed by two baby ducks first showed up on Animal Planet’s Wall Of Fame it ellicited some shock and awww. But, ducklings latching onto a different species is nothing new. Imprinting is the process by which a baby animal establishes biological bonds. Typically, this bond between the ducks and the first thing they see would bind them to their mother. But in this case, what they saw happened to be Yogi.

First suggested by 19th century amateur biologist Douglas Spalding, imprinting was made famous by zoologist Konrad Lorenz through his studies with geese. This type of imprinting, where an animal establishes a parental relationship is called filial imprinting. Lorenz’s experiments showed that geese hatched in an incubator would imprint on the first “suitable” thing they saw, during a time he called the critical period  (between 13-16 hours after hatching.) Images of Lorenz being tailed by baby geese that bonded with him through his studies are a common example of imprinting. 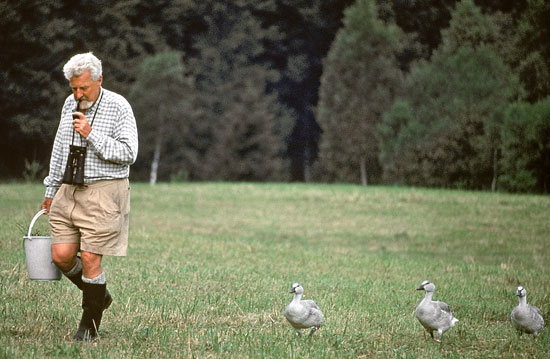 While Lorenz and his geese were certainly a site to behold, somehow the images just don’t have the same cute-factor as Yogi being followed by the ducklings, named Biggie and Pac (short for Tupac.) According to the animals owner, Fraces Marsh, they never intended for the ducklings to imprint on their dog.

After purchasing the ducklings, they were riding home in a box in the car. Inquisitive Yogi poked his head into the box and started licking the ducklings, which was enough to gain him two loyal followers. While the bond joining the three animals may weaken as the ducks age and their hormones change, for now they are still quite the trio.