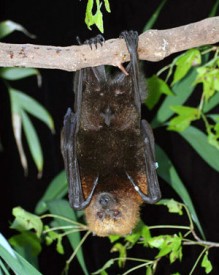 According to a new and very important scientific study, bats that are ‘drunk’ on fermented fruits and nectar have no trouble flying straight.

Scientists theorize that bats have developed higher alcohol tolerance precisely because their diets contain so much natural alcohol:

Tropical bats of Central and South America regularly eat fermenting fruits and nectar. But they can fly and use their built-in “sonar” just as well while inebriated as while sober—even with blood-alcohol contents that would exceed legal limits for people.
…

The scientists then took saliva samples to gauge the bats’ blood-alcohol content (BAC). Some bats had a BAC of more than 0.3 percent—in all 50 U.S. states, it’s illegal to drive with a BAC of 0.08 percent.

The flying mammals were placed in a closed obstacle course on the forest floor. “It’s like walking a straight line,” Fenton quipped, referring to a common test given to suspected drunk drivers by police —except to succeed, the bats had to maneuver around hanging plastic chains without crashing.
…

New World bats’ high tolerance may have afforded them an evolutionary edge, Fenton added, since they could handle eating fruits that other animals couldn’t.