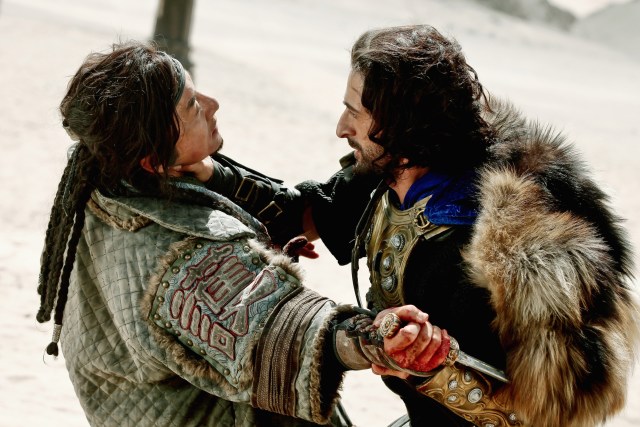 I should say up front that I have no idea how accurate this “based on a true story” movie is. I might go ahead and start looking some stuff about it up in the future, but I haven’t yet. But the difference between this “based on a true story” movie and others is the fact that my enjoyment of this movie doesn’t depend on it being a true story. The filmmakers could have said this is a complete piece of fiction and I still would have really enjoyed watching Dragon Blade as a piece of pure epic action filmmaking. And I would also say this isn’t exactly a great (or maybe even a good movie), but oh my gosh, it is just so damn entertaining and such a fun watch; I’m willing to give it a pretty big pass, even though it has some pretty big flaws.

I’ve had this experience a few times where logically, I know a movie is kind of stupid, but it’s such a fun time at the theater that I just want to ignore those issues—and I’m not saying this movie is so bad that you have to watch it so as to be bad-good or a guilty pleasure. It transcends that idea and is a legitimately good (and fun) movie despite flaws that would have made other movies bad.

What’s the difference? Usually, the effort of those involved that shows on-screen. There are a lot of terrible movies that are brought down by the complete lack of effort and love for the material. We’ve had some of those movies this year, in fact. In Dragon Blade, though, there isn’t a lazy piece of work on display, even when there’s a misstep, and I got the sense that there’s a lot of love and inspiration behind this movie, especially from star Jackie Chan and writer-director Daniel Lee. Nobody’s phoning it in, and that goes a long way in making a movie which could be ridiculously bad, a good piece of WTF filmmaking.

And “WTF” was my reaction through a lot of this movie. Story-wise, it’s kind of hard to describe, because it seems pretty complicated. … But let’s give it a try. (If I get something wrong, I’m sure I’ll hear about it.) Jackie Chan is the former general Huo An of the Silk Trade Squad, charged with keeping the peace. He’s exiled for a reason I still don’t understand and sent with his men to rebuild a destroyed city. They have 15 days to do this or they will be permanently exiled (kind of the difference between suspension and expulsion in school).

Then, a Roman army comes to the city led by Lucious (John Cusack) who has a sick, blind child with him (Chinese-British child actor Jozef Waite). That child is actually the Roman prince, who was blinded by his brother Tiberius (Adrien Brody) when their father decided to make the younger child the heir to the throne rather than big brother. Lucious and Huo An get into a nice sword fight before they finally decide to call a truce, and after some tension, these two come to reasonable terms and budding friendship. The Romans will help build the city if the Chinese will bring the Roman to the Parthian Queen (Lorie Pester) to draw up an alliance against Tiberius. They build the city, become allies, and then Tiberius appears and tries to take complete control of the Silk Road.

But during all this, there is a lot of fighting. There’s a lot of sword fights that look great but are a little over-edited. I’ve said it before: If you have capable fighters (even if you have to use stuntmen), I want to see the whole move without covering it with edits and tight shots. Over-editing fights makes them look like you’re trying to hide mistakes or the performers aren’t capable. And more importantly, Jackie Chan is so great at staging fight choreography that I can get the same pleasure from watching long takes of his fight scenes as I can watching a great wide shot of dance.

That might be the reason the scene I enjoyed the most and made me really smile, is a bizarre kind of “you’ve been served’ friendly dance-fight battle between Chan’s men and Cusack’s (although Cusack doesn’t join in the fun). They show their moves, then the others show there moves, then they break off some broom sticks and start pretending to sword fight. It’s kind of hilarious that this is how men who just spent days building a city would take a break from physical labor, but damn is it fun to watch.

To be honest, a lot of the credit for the simple pleasure of this movie definitely comes from the all-in performances. No matter what, Jackie Chan is a just a heck of a charming actor, and even at 61 years old, I completely believed he could beat these 42- and 49-year-olds in a fight (the fact that the fights go on as long as they do made me more impressed with Cusack and Brody’s physical abilities). Something about Chan’s acting is so easy, modern, and charming that he seems to lighten the entire movie, so what could play like a Ridley Scott over-serious epic seems like just a big and fun action movie in the tradition of something more like the Fast trilogy, including a surprising amount of humor. Well, except when we see a 6-year-old Waite crying in terror (that happens several times). As a word of warning, (spoiler alert) in the past two weeks I’ve seen two movies with little children being terrified and forced from tall buildings, and this not-so-serious movie took that action to its logical conclusion.

Cusack, although he makes NO EFFORT whatsoever to put on an accent, there is definitely a lot of effort in terms of performance and character. We’ve seen a lot of ridiculous performances lately from Cusack, but he really can be a fun (sometimes too big) kind of actor, although often guilty of breaking the fourth wall with nods to the audience (Jim from The Office was often guilty of this).

But his scenes with Chan (they have some real chemistry) and Waite are surprisingly strong and emotional. Hamming it up more than Cusack is probably his second in command, David Peck, as the protector of Publilius who is pretty hilarious at times in just how big he’s willing to go. But no one goes as big as Adrian Brody, who is just AWESOME. He does try for the accent, but it isn’t consistent AT ALL. If you’re asking, “Does someone cut a man’s hand off, catch a knife in his bare hand, and/or lick blood off his hand after stabbing someone who splattered him?” The answer is yes. All this happens in about 2 minutes thanks to Brody.

He’s just so absurdly odd in the movie but sells it with such gleeful delight that I couldn’t help but enjoying watching this total weirdness. Between this performance and his work in Grand Budapest Hotel, please just give this guy a stupid mustache and let him play villains from now on. He clearly loves doing it. Between he and Jason Statham in Furious 7 this year, I completely understand the appeal of ridiculous, over-the-top villains.

Although there aren’t many women in the film (Mika Wang plays Chan’s wife, a teacher of orphans), and Lorie Pester plays the queen of Parthian, Lin Peng makes a big impression as warrior Cold Moon who is the only person who seems capable of beating Chan in a fight and has killer bow and arrow skills—and gets to lead an army. The movie is also odd (in a good way) in being kind of a big movie that actually wants to have some diversity with armies of Indians, Huns, Uighurs, and Turkics fighting together with the Chinese and rebel Romans against Tiberius. This also leads to another really fun, massive battle sequence with everyone riding from four corners at the big Roman army (you better believe they have a birds eye wide shot of that scene). Speaking of birds … yeah, there is a scene of birds attacking people, which is also awesome. Yeah, they threw that into this movie, too.

Sure, some of the editing is a little heavy handed, and the CGI isn’t as clean as Hollywood studio movies have perfected it, but the production design and costumes are pretty great, the fights impressive, and it’s a pretty breezy movie to sit through. I didn’t see it on the big screen, but I wish I had, because this would be a delight to watch with a crowd of people enjoying it as much as I did (especially on IMAX, which I believe is how it was shown in China).

It should be mentioned that the obligatory 20 minutes has been cut from the movie (as happens it seems with every Asian movie when it begins worldwide distribution), and I only saw the American version, so I can’t comment on how it has been changed or if complaints that it is a Chinese propaganda film are valid statements. As it is now, it doesn’t feel like one. It feels like a really fun Jackie Chan war epic with modern sensibilities and humor, with two hilarious American actors joining him, and making something fun and light that can be enjoyed by a lot of people. Mission accomplished.