The Dora Milaje Have Been Pretty Patient, Actually, in The Falcon and the Winter Soldier, All Things Considered 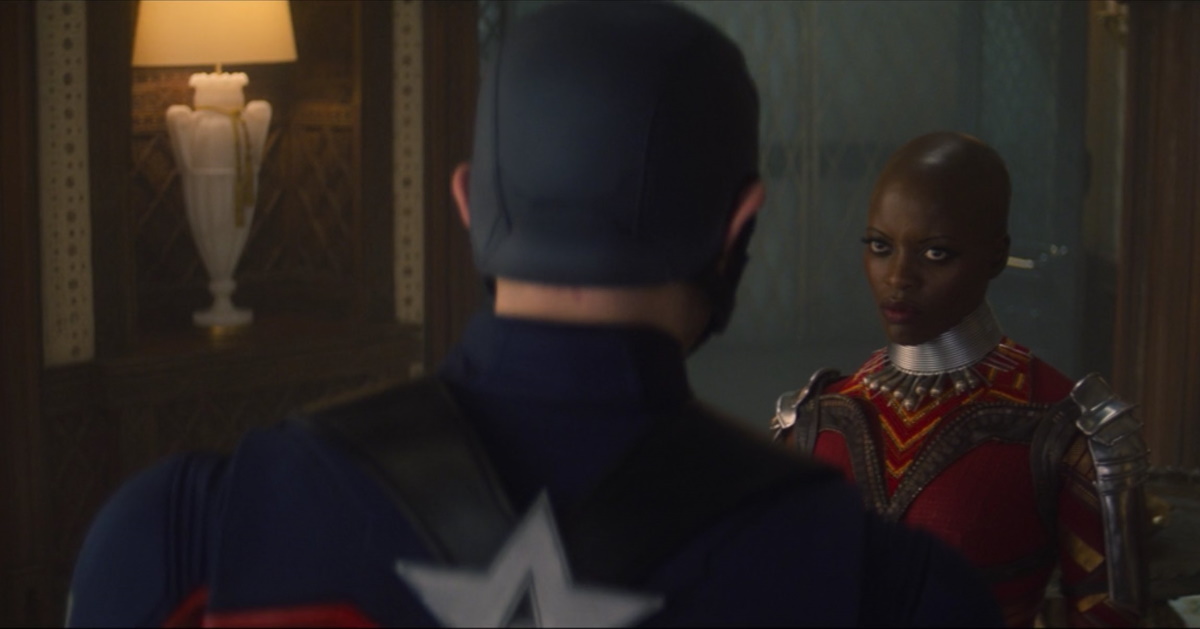 When I saw Ayo show up at the end of the third episode of The Falcon and the Winter Soldier, I was immediately reminded of the time she stole that scene in Civil War where she told Black Widow, “Move, or you will be moved.” It was her only line, but it gave us a perfect glimpse of who she was as a character. To steal a common line of thinking from reality TV, she wasn’t there to make friends, and if you get in the way of what she is there for, she’ll remove you from her presence.

Honestly, T’Challa was the same way at the beginning of Civil War. He wasn’t there to accept Clint’s friend request, he had a job to do.

So I’m not sure why anyone was surprised about what went down in TFATWS episode four. I suppose it’s because Ayo and Bucky have a personal connection with one another. However, I’d argue that Ayo and the Dora Milaje showed a measured level of patience, especially considering everything they—and Wakanda—have been through since that infamous line in Civil War.

The way we’re introduced to Ayo is during a time of great tragedy for her home, Wakanda. Her king, T’Chaka, is killed, T’Challa taking his place not through the grand coronation that he (and everyone else) was expecting, but through his unexpected death. Even so, T’Challa, when faced with Zemo, decides to NOT kill him. He lets him be taken into custody. On top of that, he turns around and helps the man he once considered as his enemy: Bucky.

This, we learn, is a big deal, because Wakanda hasn’t opened itself to outsiders for generations. In fact, we learn in the Black Panther movie that T’Chaka didn’t even open Wakanda to his own nephew, the son of his brother, N’Jobu. Granted, T’Challa ends up rejecting the old ways, but he certainly grew up with them and still gave space to Bucky before we see him fully embrace the idea of change.

You can say it’s because T’Challa felt like he owed him, but no matter how big of a debt he thinks he owes, inviting an outsider into his closed-off home is a huge deal. Especially a white one, as the beginning of Black Panther shows the history of why an entirely Black nation would want to seal itself from the rest of the world (though really, considering the history of how Black people have been treated for, well, ever, you don’t need the movie to spell it out for you).

Basically, Wakanda’s got trust issues for a reason, both historically, and recently (looking at you Klaue), though by the end of Black Panther they’ve decided to open themselves, and their resources, to the world.

Great! What happens next?

Infinity War, you know, the film where Wakanda gets decimated in the battle against Thanos and his generals?

They also give Actual Captain America (not to be confused with the Insult to Dumpster Fires Version, John Walker) a new shield, bring Bucky a new arm, and try their hardest to get the Mind Stone out of Vision so he doesn’t have to be killed. Don’t worry, I’ll get to the shield and the arm later, right now I’m focusing on the fact that Wakanda loses ANOTHER king (T’Challa) along with countless others—BUCKY included, RIGHT after they decided to stop hiding from the world.

I’m not gonna mince words here, that sucks, and that would personally make me wary about opening myself up to anyone ever again. That’s a lot of hurt to be carrying around, you know?

So imagine dealing with everything that’s happened, from Civil War to Endgame, only to discover that the man you opened your home to (Bucky) helped the man who killed your king escape (Zemo). And no, Bucky, I don’t care how many times you try and dance around it, you helped Zemo escape, have been traveling around with him, and watching him become a dancing meme.

But really, this isn’t the first time Bucky’s acted in a way that’s a slight against the people he’s either working with (Sam) or close to (Ayo). After all, he let Zemo out without telling Sam, and like Ayo, reassured him that it was the right thing to do. I think the worst part about it is that he knows that what he did was wrong, it’s not like he’s surprised that Ayo shows up. He gets the severity of his choice but still asks for time.

I dunno about you, but I’d be pissed all the way off.

At least, that’s what I wanna say, but the hard truth to admit to is that when it’s someone we have come to trust, we typically decide to hear them out. It’s extremely telling to me that even after everything she’s been through, Ayo STILL gives Bucky the benefit of the doubt because, well, she trusts him. And Bucky knows this, knows what she, specifically, has done for him (as we see in the flashback of her helping him heal) and what she and her people have been through.

It’s so reminiscent of the times I’ve seen Black women overlook red flags because the people they trust reassure them that it’s fine, it’s for the best, and that they’ll handle it. I’ve done it, too. I’ve pushed aside any hurt and frustration in favor of trusting someone who I was close to on matters that deeply affected me.

But you can only do that to us for so long.

For Bucky? That was 8 hours.

And he KNEW it, hell, he even tells Zemo and Sam that the Wakandans are there.

Imagine returning to face the person you extended your trust to (Bucky), only to be talked down to by Captain “I Think We Got Off On The Wrong Foot,” and having that person you trusted fight AGAINST you. Even if Bucky knows his time is up, he still expects Ayo to continue to extend the patience she’s already given him. The amount of grace Ayo has shown is extraordinary, but relatable, because that’s just what we do for the people we care about … even if we’re treated as being the ones in the wrong.

And as one last bit of insult to injury, the only thing Super Serum Me Captain gets out of it is, “They aren’t even Super Soldiers.” He basically takes it with as much humility as a little boy who can’t believe he was beaten up by a girl. He doesn’t understand the gravity of the situation, nor does he care to, if we’re being honest, as demonstrated later in the episode when he takes the serum.

This is all after Ayo was kind enough to leave behind the shield and arm that HER PEOPLE made. The Dora Milaje could’ve taken both of those things, but no, they were gracious enough to leave them. Actually, I think had this not been a group of Black women, had this been, like, our own government, and even our On Loan Captain America, that shield and arm would’ve been locked away, or at the very least, they would’ve rubbed it in Bucky, Walker, and Sam’s faces.

Those men are lucky that the Dora Milaje handled it the way they did. While we already know Walker didn’t get the message, I certainly hope that Sam and Bucky do.